UNITE-HERE/DPOC “Ballot Parties”: So Much For The Secret Ballot

In the late 19th Century, the U.S. switched to the secret ballot as an antidote to urban machine politics and to allow individual citizens to vote their conscience shielded from outside pressure from political bosses.

Now, a new state law requiring every voter be sent a vote-by-mail ballot is undermining what used to be a time-honored symbol of the democratic franchise.

On February 15, the militantly leftist UNITE-HERE Local 11 union (in partnership with the Democratic Party of Orange County) held a series of “ballot parties” at the Sheraton Park Hotel and the Anaheim Hilton Hotel – two of the five hotels in the Anaheim Resort whose workers are represented by Local 11: 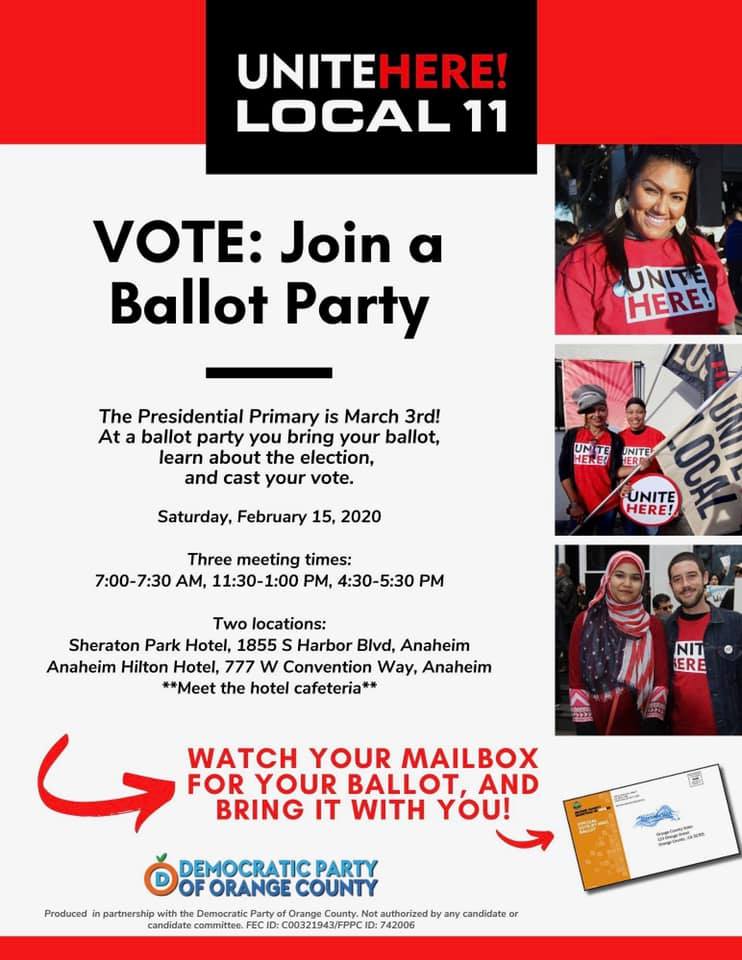 Local 11 leaders were summoned to a series of meetings at both hotels and asked to bring their ballots so they could vote as a group.

Local 11 is run by Ada Briceno, who is also the chair of the OC Democratic Party. Briceno posted these photos of one of the “ballot parties” on her Facebook page: 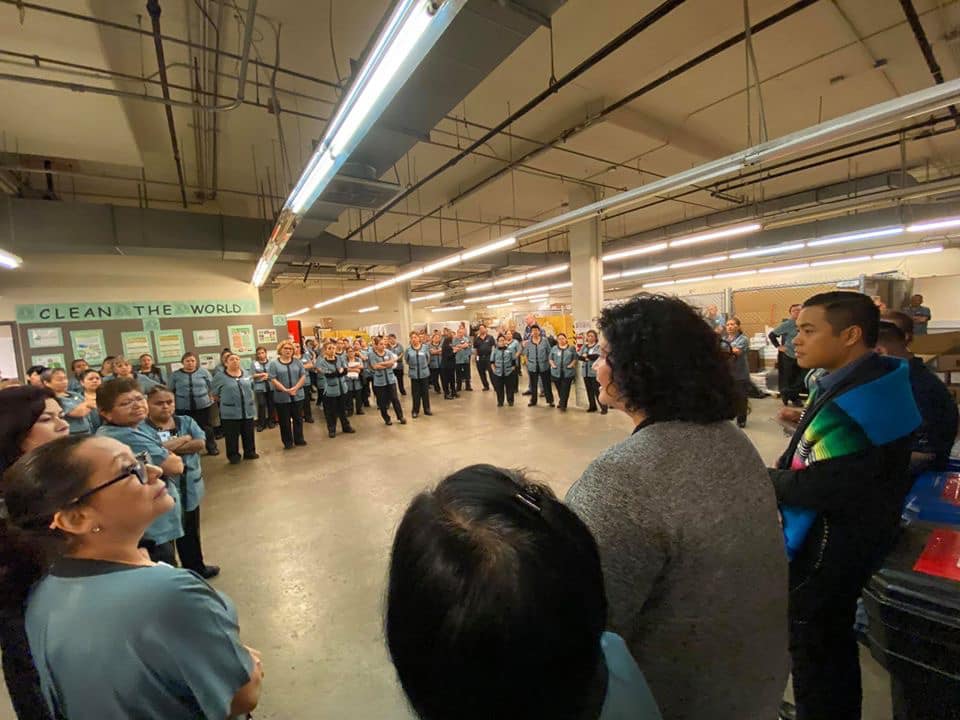 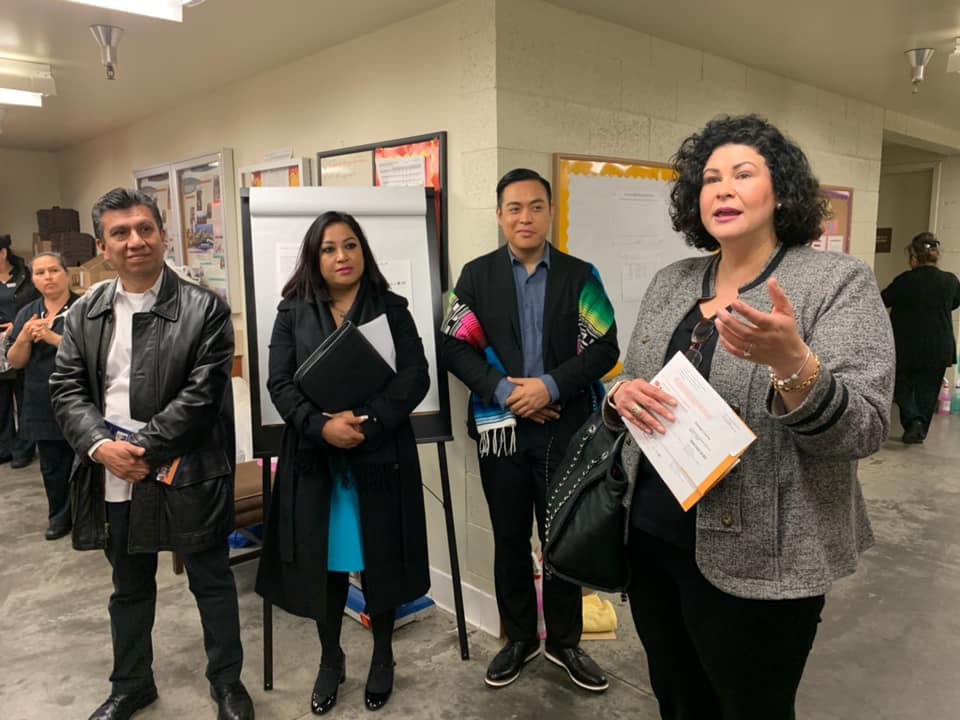 Learning their members on who…er…how to vote.

Here’s a Local 11 member signing her no-longer-secret ballot after union boss Briceno “helped” her to vote: 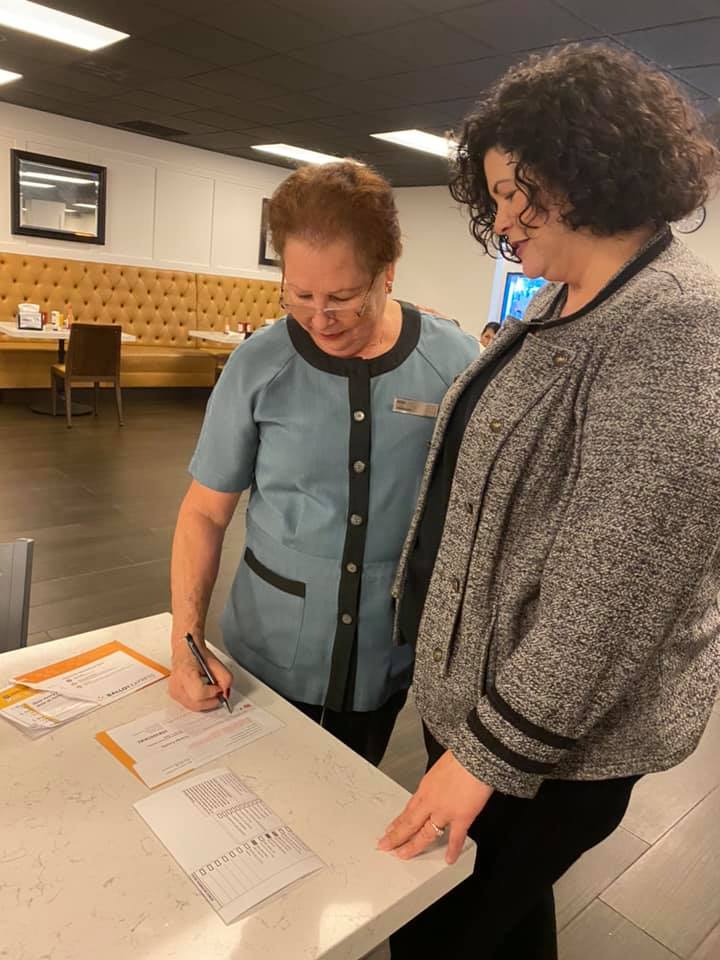 “Thank you for voting as instructed. We’ll remember that.”

One of the parties was in the Anaheim Hilton parking lot: 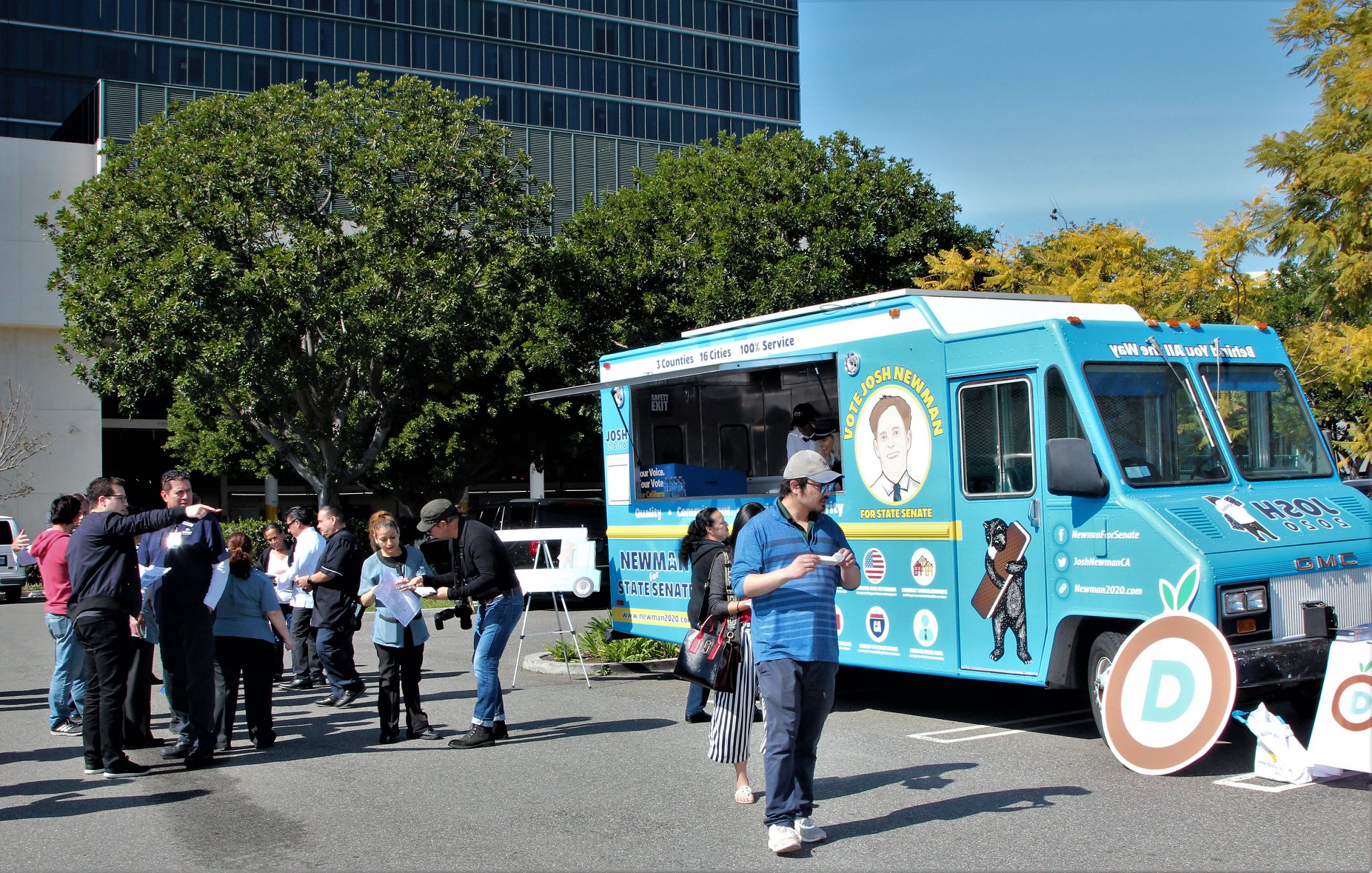 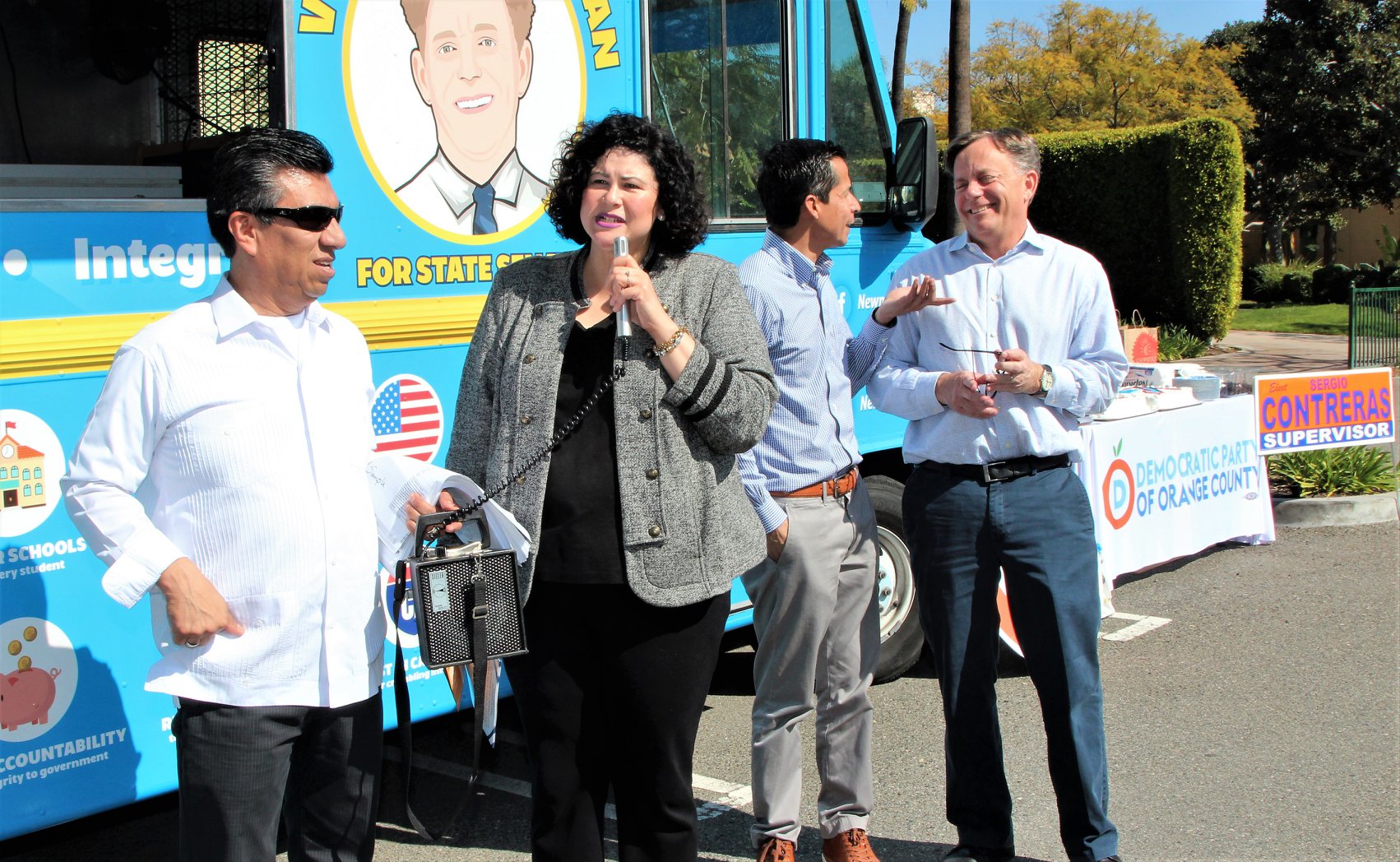 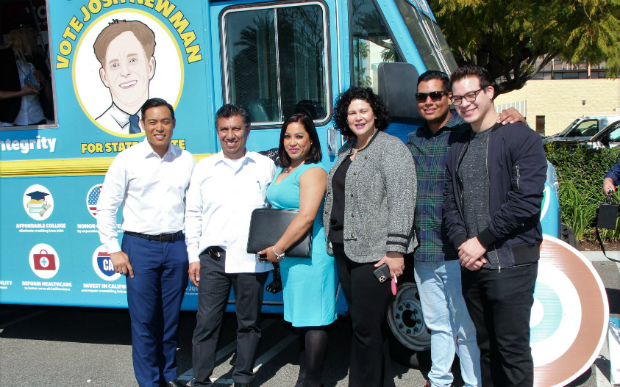 The ballot parties were spun to gullible media an merely opportunities for Local 11 members to “learn about the voting process”:

Union and party officials directed Local 11 members on how to vote as they filled out their ballots: 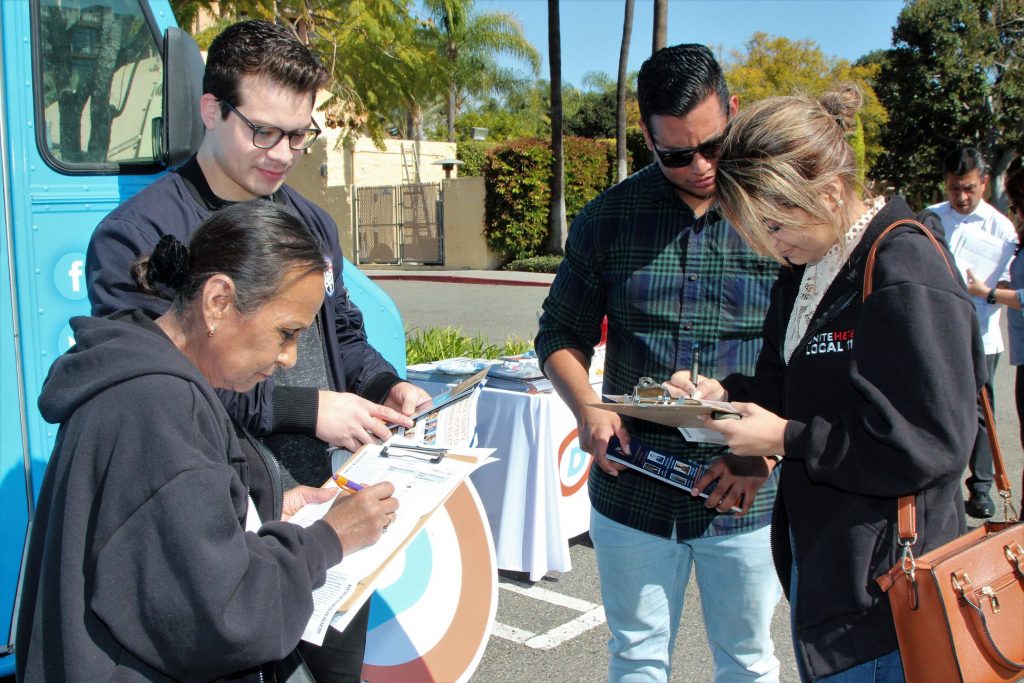 In this photo, you see two Local 11 members being instructed on whom to vote for while they complete their ballots. The man on the left is Giovanni Chavez, chair of the DPOC Youth Committee. The man on the right is Luis Aleman, DPOC secretary who works for the AFL-CIO. 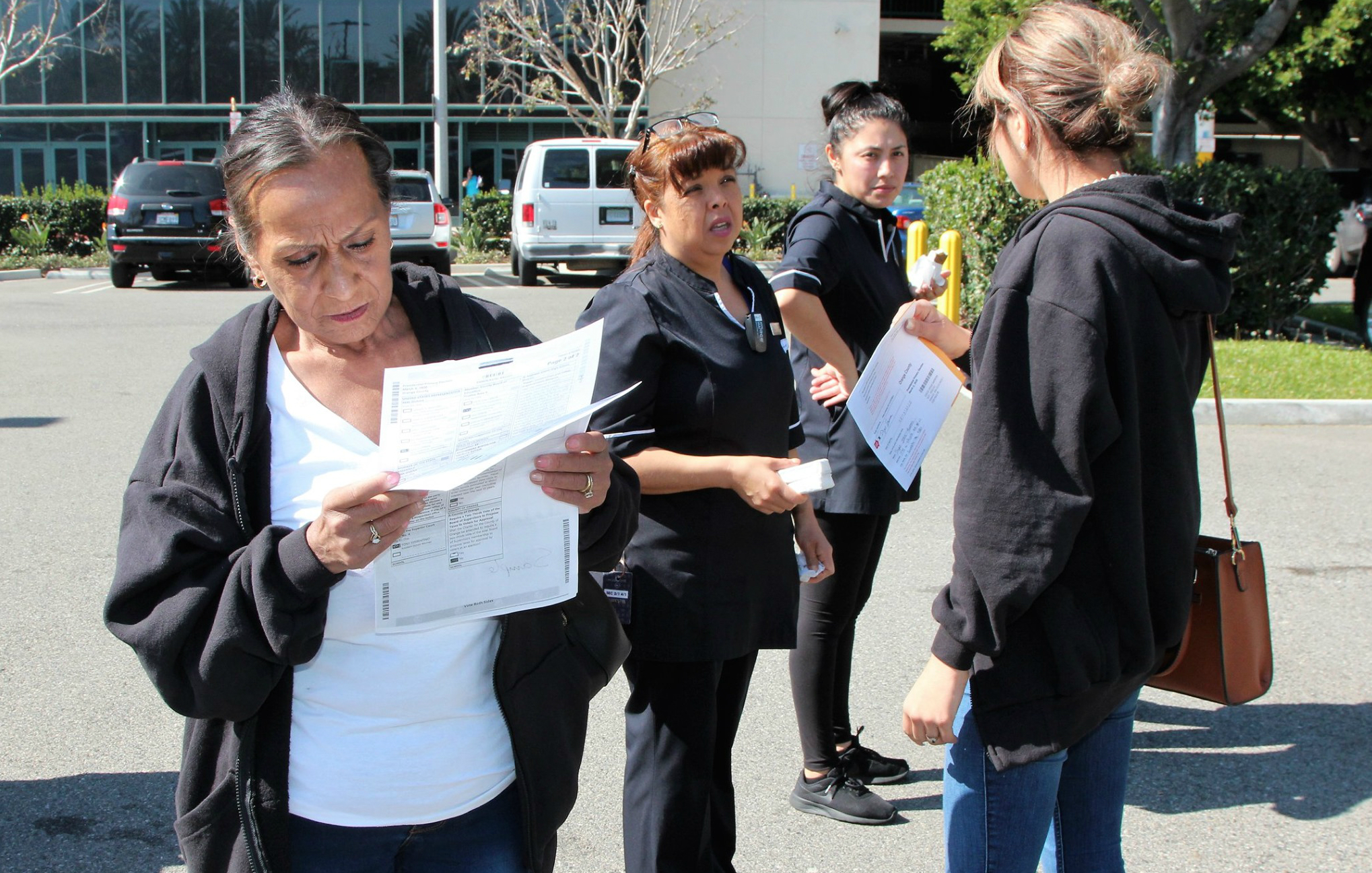 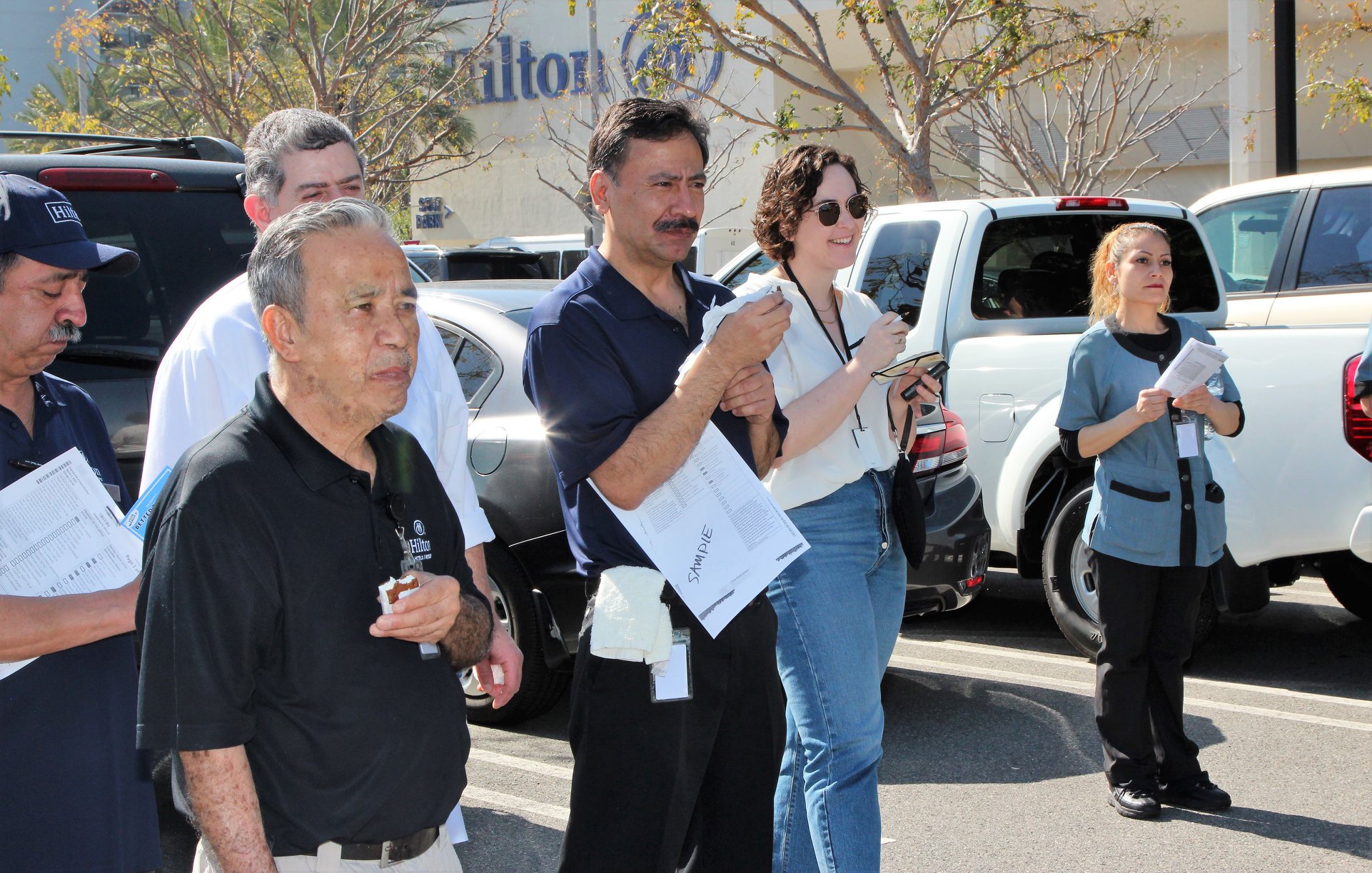 Here Veronica Chavez, a Local 11 organizer who is working with the Bernie Sanders for President campaign, holds a stack of already filled out “sample” ballots and wearing a Bernie Sanders button while instructing Local 11 members on how to vote:

Here is DPOC Secretary Luis Aleman instructing more Local 11 members for whom to vote. If you look closely, you’ll see the “sample” ballot he is holding is marked for Bernie Sanders: 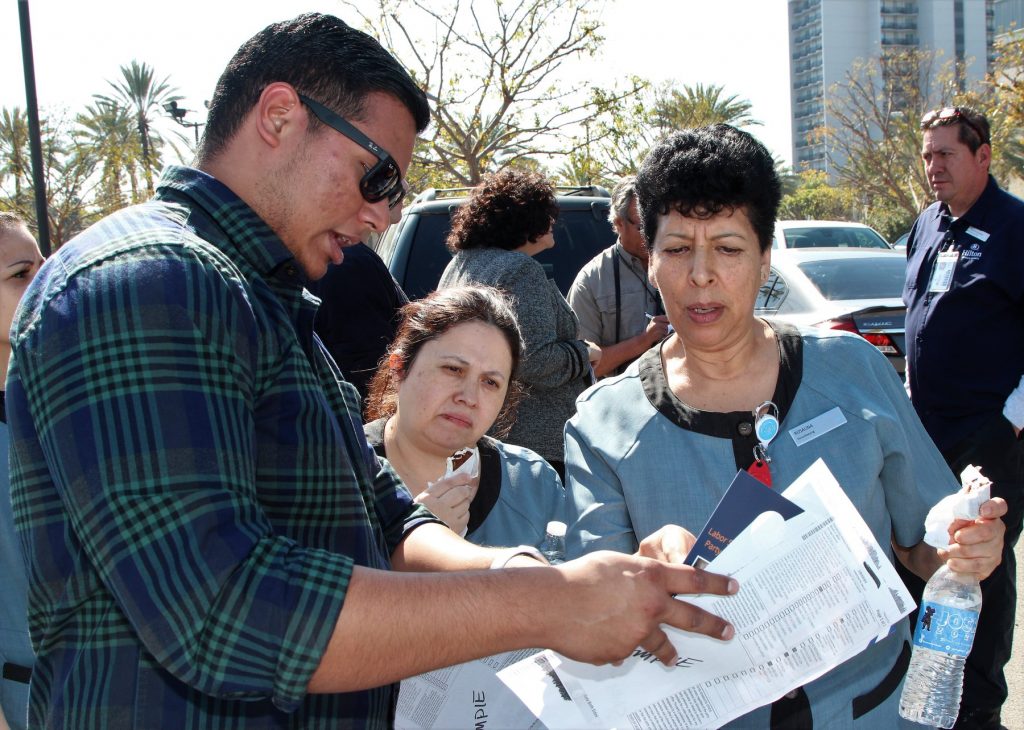 Remember, this ballot party was an official DPOC event co-sponsored with UNITE-HERE Local 11. And further keep in mind the Democratic Party of Orange County has not endorsed any presidential candidate.  And yet DPOC officials at a DPOC event were instructing people to vote for Bernie Sanders.

Think about it. The California presidential primary is around the corner. If you’re a Democrat supporting Joe Biden or Pete Buttigieg or Elizabeth Warren or Amy Klobuchar, it must undermine your confidence in the neutrality of the OC Democratic Party. It has to be disturbing to the California operations of the other Democratic presidential campaigns to know that the DPOC Chair Briceno and her allies are actively using the county party apparatus and brand to push voters to Sanders.

Ballot Parties Undermine The Secret Ballot
More importantly, these ballot parties illustrate a serious consequence of the new system of mailing ballots to every voter, whether or not they requested one.  This is the type of machine party politics that promoted late 19th century reformers to adopt the “Australian” or secret ballot.

Massachusetts became the first state to adopt the secret ballot in 1888, with the rest of the states quickly following suit. Prior to this reform, party machines printed up ballots indicating machine choices, and then rounded up voters to bribe, cajole, pressure and intimidate them into voting the party line.

As political scholar Yoav Fromer wrote in the Washington Post in 2017:

Motivated primarily by family, communal and ethnic bonds, many of the new immigrants — to the horror of progressive reformers — often voted en masse for whomever party bosses told them to. The secret ballot was meant to break this dependency.

The DPOC and UNITE-HERE Local 11, under Briceno’s leadership, are working to restore and deepen that dependency.

Fromer’s column actually advocated for temporarily abolishing the secret ballot so that Trump voters can be shamed and ostracized – unwittingly making the case for why the secret ballot was and is a vital reform.

The point of the secret ballot was and is to permit the individual citizens the freedom to vote his or her conscience in the privacy of the voting booth. They could share or shield their choices, as they wanted.

Ballot parties like the one organized by the DPOC/Local 11 do violence to the spirit of that vital democratic reform. Summoning Local 11 members to fill out their ballots under the watchful eye and active guidance of union officials – the same officials on whom they would have to call to represent a grievance before management – is a political petri dish for intimidation, peer pressure and groupthink.  It has more in common with a banana republic than the American Republic.