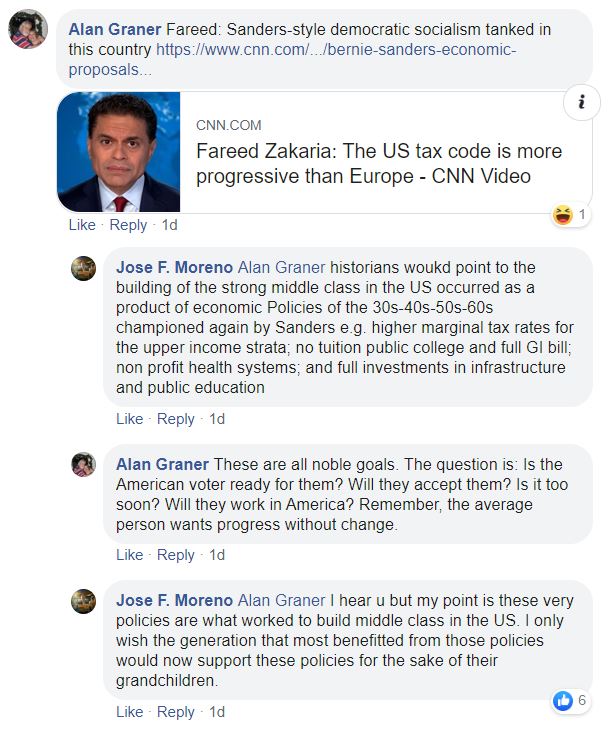 The above exchange on Councilman Jose F. Moreno’s Facebook page is worth discussion in that it involves some common myths left-wing activists have advanced in defense of Bernie Sanders’ socialism.

Sanders supporters fluctuate between calling for the revolutionary transformation of America and insisting his policies are updated versions of the New Deal or merely an American version of Scandinavian social democracy.. Perhaps it depends on whether they’re talking to fellow Bernie Bros or mainstream liberals concerned about the Vermont socialist’s radicalism.

In the linked segment, CNN host Fareed Zakaria notes that the Scandinavian countries cited by Sanders and his supporters are characterized by flexible labor markets (i.e. absence of union-sponsored policies like AB 5) and heavy taxation of the middle class and poor. In fact, the wealthy pay a far higher share of income tax revenues in the U.S. than in Nordic nations:

Moreno credits the New Deal as the starting point for the emergence of a “strong middle class.” Granted, American high school students – this one included – have for decades been taught the New Deal ended the Great Depression. That’s wrong. In fact, the economic data tells a different story: the New Deal prolonged the Depression. Punitive, counter-productive tax hikes, helter-skelter federal interference in the economy, self-defeating tariff policies (enacted under Hoover but continued under Roosevelt). In fact, FDR’s policies produced a second Great Depression – or Depression within a Depression – in 1937.

Moreno also cites high marginal tax rates on the rich as a cause of growing middle class prosperity in the post-war era. AOC often notes the top income tax rate was 91% during the administration of Republican President Dwight Eisenhower, and it’s become a standard progressive talking point. It’s also nonsense. The tax code back then was riddled with deductions, for example. According to the non-partisan Tax Foundation, the effective tax rate of the top 1% in the 1950s was 16.9%, and they accounted for a smaller portion of federal income taxes than the today. The U.S. also experienced three recessions during that 1950s.

The United States emerged from World War II vastly more powerful, richer and productive than it had been when the Japanese bombed Pearl Harbor. Alone among the world’s combatants, our homeland was untouched. Europe and Asia were literally wrecked. The United States accounted for half of the planet’s economic output. A much higher percentage of of the workforce was unionized, but American employers also didn’t have to simultaneously contend with an enormously expensive regulatory burden.

The go-go economy of the 1960s was fueled in large part by the John F. Kennedy’s program of tax reduction – for example, lowering the top rate to 70% – and tariff reduction.

Neither was “no tuition public college” a real driver: there was no national uniformity in that regard. Tuition-free public and private colleges were more common then, but it was also far less expensive to operate a college than is the case today. The GI Bill was sound, forward-thinking public policy – and the template for the generous educational benefits we still provide for active duty service members and veterans.

Eisenhower’s launch of the interstate highway system was also an economic accelerator that made it cheaper and easier to move people and goods around the country. But building highways isn’t peculiar to Sanders and socialism. Infrastructure is just a basic attribute of government and has been since the founding of our Republic. The federal government, for example, subsidized (gasp!) the building of the Transcontinental Railroad in the 1860s.

Moreno is trying to normalize Sander’s socialist policies by disingenuously retrofitting them to mid-20th Century America, and credit the prosperity of that time to those policies. It’s inaccurate and ahistorical to claim it was Sanders’ policies – or variations of them – that “worked to build the middle class in the US.” If Sanders policies had been enacted in 1945, they would have stunted the post-war boom. The socialist policies of Bernie Sanders are alien to the American experience.

Moreno even tries to guilt older Americans: “I only wish the generation that benefitted from those policies would now support these policies for the sake of their grandchildren.”

On the contrary – the best thing we can do for the younger generation is reject the Bernie Sanders socialist program, else we condemn that generation to an era of economic stagnation, limits and rationing.

As Councilman Moreno is fond of saying, “History. Matters.” But when one’s understanding of American history is shaped and informed by Marxists ideologues like Howard Zinn, the one’s grasp of history will be stunted and distorted.