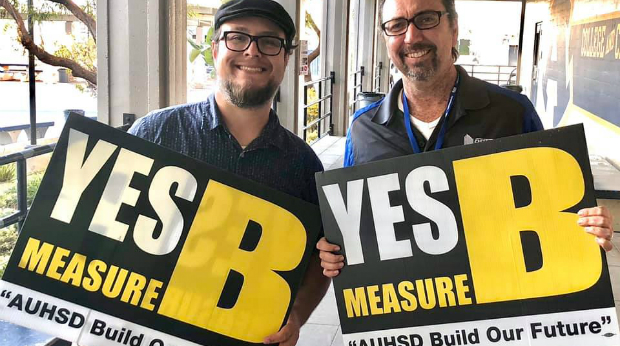 Measure B, the $398 million school construction bond placed on the March 3 ballot by the Anaheim Union High School District, fell well short of the required 55% vote threshold for approval.

AUHSD voters were evenly split, with 51.72% supporting and 48.28% opposing Measure B.  If it had been approved, the total cost to AUSHD taxpayers of paying off the bond would have been more than $700 million.

The Yes on Measure B campaign overwhelmingly outspent the grass-roots opposition campaign, which wasn’t able to submit an opposing argument for the sample ballot in time. The pro-bond campaign raised at least $57,000 to fund voter communications; the contributions came from building trade unions and business firms that would be hired for the bond-funded projects.

Last year, the AUHSD spent tens of thousands of tax dollars on polling and community “engagement” activities – including  giant summit of district management and teachers where they all agreed the borrowing another $398 million is prudent for a district with declining enrollment and rising expenditures.

In November, AUSHD Trustee Al Jabbar told district staff at the October 2019 Board meeting that “the key for us to win the next bond” was “pumping enough information” out so that the “community is bombarded.”

The Anaheim Secondary Teachers Association – the union representing AUHSD teachers – campaigned heavily for Measure B. The union went so far as using AUSHD school sites as staging areas for campaign precinct walks. The AUHSD acknowledged this misuse of district actions was illegal but took no action.

Even after AUHSD voters approved Measure H, a $245 million school facilities bond, in 2014, AUHSD intended to borrow more than a billion dollars for school construction and repair projects.  Rather than put one giant school bond on the ballot, the district leadership chose to slice up that billion dollars in borrowing and feed it to voters in chunks every few years.

Orange County voters seem to be hitting the pause button on local school bind measures, after approving a rafts of them in recent years after the approval threshold was lowered to 55%: 9 of the 10 bond measures of OC school bond measures on the March 3 are failing, often by large margins. That holds true even in elections where the “No” campaign to small to non-existent.

Voter coolness to approving more school district debt was manifested in other areas of California, as well – as this back-and-forth on CTA Vice President David Goldberg’s Facebook page shows: 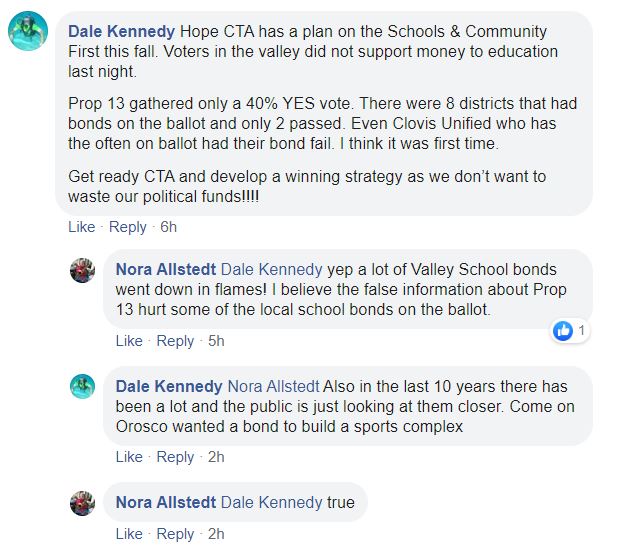