Mind Of Moreno: Trump Has Accomplished More Than Obama Because He’s White 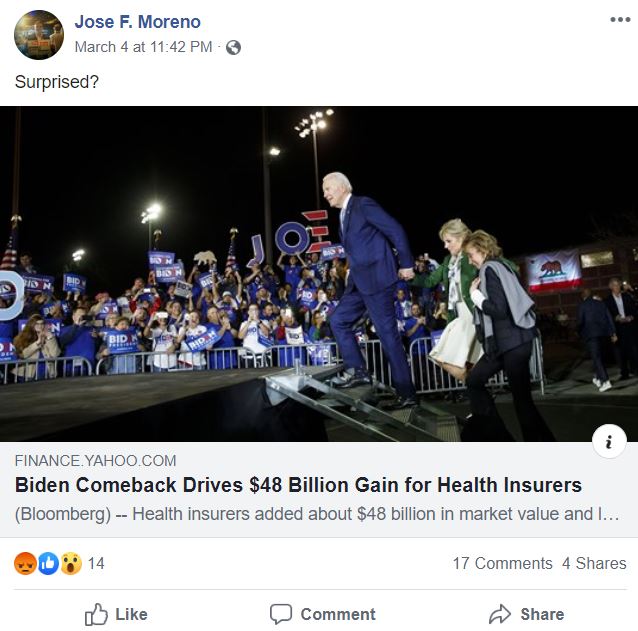 Councilman Jose F. Moreno posted this on his Facebook page last week. Moreno is an ardent supporter of socialist Bernie Sanders and his “Medicare for All” scheme – which would outlaw private health insurance. It would force the 170-million or so Americans who rely on private health insurance into a government-funded and controlled health care system.

More interesting than his expected economic illiteracy is the ensuing commentary that illustrates how steeped many Democrat activists have become in racial and identity politics.

When Democrat activist Art Lomeli tries to accentuate the positive by hoping Biden can beat Trump and elect a Democratic Congress with his coattails, Moreno rains on his parade:

Moreno’s glass-half-empty stance notwithstanding, Obama did more to advance the progressive political agenda than any president since Lyndon Johnson, with a massive expansion in federal control and regulation of the economy.

Rather than point out the obvious to Moreno, Lomeli says Obama didn’t get more done because he’s black. 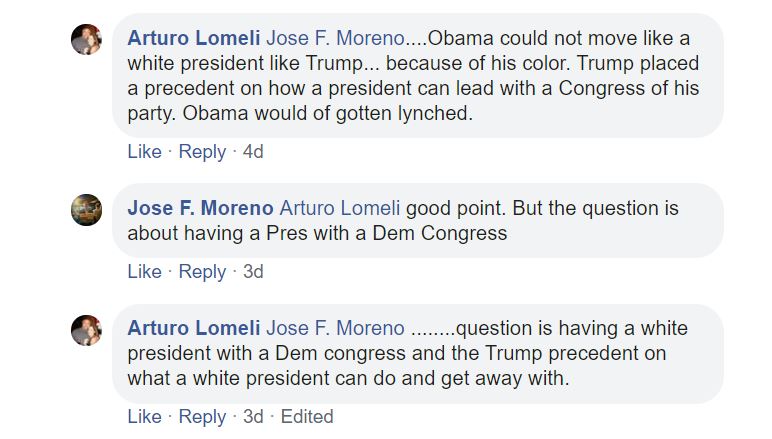 Obama got an overwhelmingly Democratic Congress to enact ObamaCare, a nearly $1 trillion in “stimulus” spending, the Sarbanes-Oxley bill to re-regulate the banking and financial services, and a number of other progressive initiatives. According to Lomeli, the only thing standing between Obama and even greater achievements during his first two years was Congressional bigotry.  Not Obama’s partisan, my-way-or-the-way approach or policy overreach – but because a racist Congress didn’t want to work with a black president.

Did Councilman Moreno express skepticism, or offer more prosaic and self-evident reasons? No. Instead, Moreno responds, “Good point” – as if Lomeli’s claim that a president’s success or lack thereof is a function of institutional racism is self-evident, requiring no further explanation or substantiation.

To normal people living in the real world, this contention is laughable. But to occupants of the woke psycho-political universe where success and failure are determined by unseen but pervasive forces of racism and bigotry; where life is viewed through race-colored glasses – claims of racism are accepted at face value, with nor further discussion necessary.

When you’re a hammer, every problem looks like a nail. The minds of today’s progressives are so thoroughly marinated in the idea that America is – as Bernie Sanders says – “racist society from top to bottom,” that all opposition to their agenda and every defect in society can be blamed on “racism.”