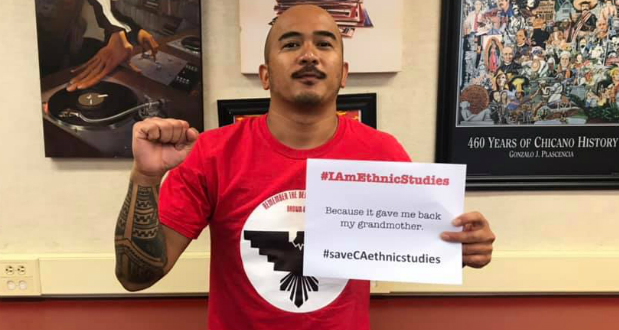 The resolution passed by the Board praises Ethnic Studies as a movement that focuses on “the history, culture, language and literature of people of color in the United States and globally” and “validates the shared experiences, culture and heritage of all students, especially for young Black and Latino students.”

The Board resolution further claims such “culturally responsive awareness and teaching” helps students learn and closes achievement gaps, although no supporting evidence is provided in the Board agenda. In fact, no documentation is included in the agenda other than the resolution itself.

The AESD Board directed district staff to “provide curricula that reflect the diversity of students and staff, and which are geared towards the understanding and appreciation of culture, class, language, ethnicity and other differences that contribute to the uniqueness of each student and staff member.”

In other words, grade schoolers will be taught to think of themselves less as individuals than as members of racial/ethnic/linguistic sub-group or an economic class. The AESD will purposefully teach them their uniqueness stems from their group identity.

The AESD Board of Education has voted infuse identity politics into K through 6th grade curriculum. That is what Ethnic Studies is: progressive political indoctrination masquerading as academics.

The AESD Board of Education is dominated by left-wing political activists and their go-along-to-get-along allies.  The Board president, J. Paolo Magcalas, teaches Ethnic Studies at Loara High School. He was elected to the AESD Board in 2016 because no other candidates ran. He is seeking election to a second term this November.

Indeed, it was Magcalas who brought Ethnic Studies into the Anaheim Union High School District. And his motive was to alter the political consciousness of students. He even published a paper explaining his belief that traditional U.S. history curriculum is “oppressive” and that he, as an American history teacher, had been an “oppressor.”

Magacalas resolved to bring Ethnic Studies to AUHSD in order to “liberate” the minds of students. Magcalas – who is running for a second term on the AESD Board of Education – is a vocal advocate for making Ethnic Studies a high school graduation requirement.

Another Board member, Juan G. Alvarez, is also a far-left political activist and AUSHD teacher. Several weeks ago, Alvarez opined on Facebook of his desire to “demolish” all walls and fences along the U.S.-Mexican border and pledged to use his “privilege” to fight for “no borders.”. 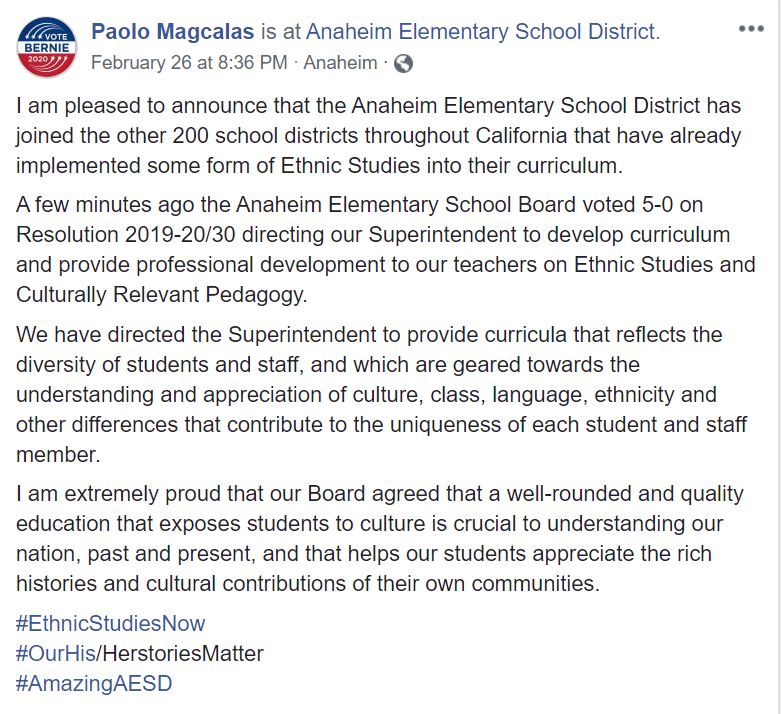 Ethnic Studies is often misunderstood as simply teaching students about other cultures – like a world history or anthropology class.  That is not the case. Ethnic Studies’ is aimed at getting youth to primarily identify as members of an historically oppressed group – regardless of their actual circumstances. It is premised on the belief that racism is still rampant in American society, and that students of color need to seek their authentic identity via their race or ethnicity or class. It encourages them to engage in “civic action” as members of their identity group, not as individual citizens who adhere to a common republican creed of equality and natural rights.

It is intrinsically political – something its proponents do not deny. Indeed, the theme of the upcoming Ethnic Studies Summit at Chapman University is “Situating the Personal as Political“: 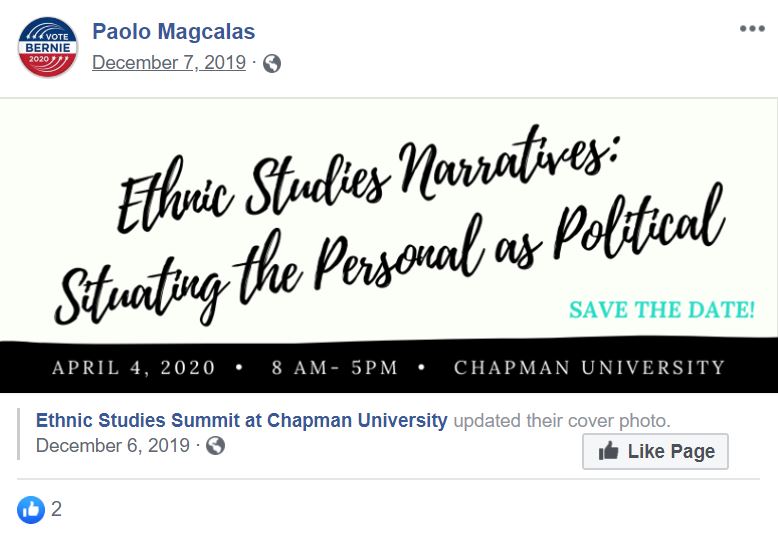 The Ethnic Studies course that Magcalas teaches at Loara High School is based on the pedagogy of a Marxist academic. On the walls of his classroom hang tributes to radical revolutionaries such as Black Panther leader Fred Hampton and the murderous Cuban communist Che Guevara. Magcalas views Thanksgiving as a racist holiday that should be “de-colonized.”

Magcalas is far from alone. Anaheim Councilman Jose F. Moreno – who wields considerable influence in both the Anaheim high school and elementary school districts – is a huge proponent of Ethnic Studies ideology.  So is AUHSD Superintendent Michael Matsuda and AUHSD teacher Carolyn Torres – who was recently elected to the Santa Ana Unified School District Board of Education. Jose Lara, the vice principal at Dale Junior High School, is an outspoken advocate of making Ethnic Studies a high school graduation requirement. To Lara,the mere absence of Ethnic Studies courses in a school district is prima facie evidence of “structural racism.” Lara used to ran an after-school learning center in Los Angeles where students were taught to view Che Guevara and Ho Chi Minh as role models.

The Anaheim Elementary School District has some of the worst-ranked schools in the county.  The AESD Board and district leadership ought to focus on doing their real job – providing the students in their charge with a quality education – rather than expending time, money and energy to incorporate ideological indoctrination into their school curriculum.  This latest folly from the AESD’s left-wing Board of Education confirms the wisdom of the Palm Lane Elementary parents who overcame underhanded maneuvering and expensive litigation from the district to break away and re-start Palm Lane as a charter school.