Citing an abundance of caution in the face of three planned protests this afternoon and evening, the City of Anaheim has declared a curfew tonight from 6:00 p.m. to 5:30 a.m.

A group of progressive political activists from the Anaheim Union High School District are organizing a “rally and protest” at La Palma Park at 4:00 p.m.: 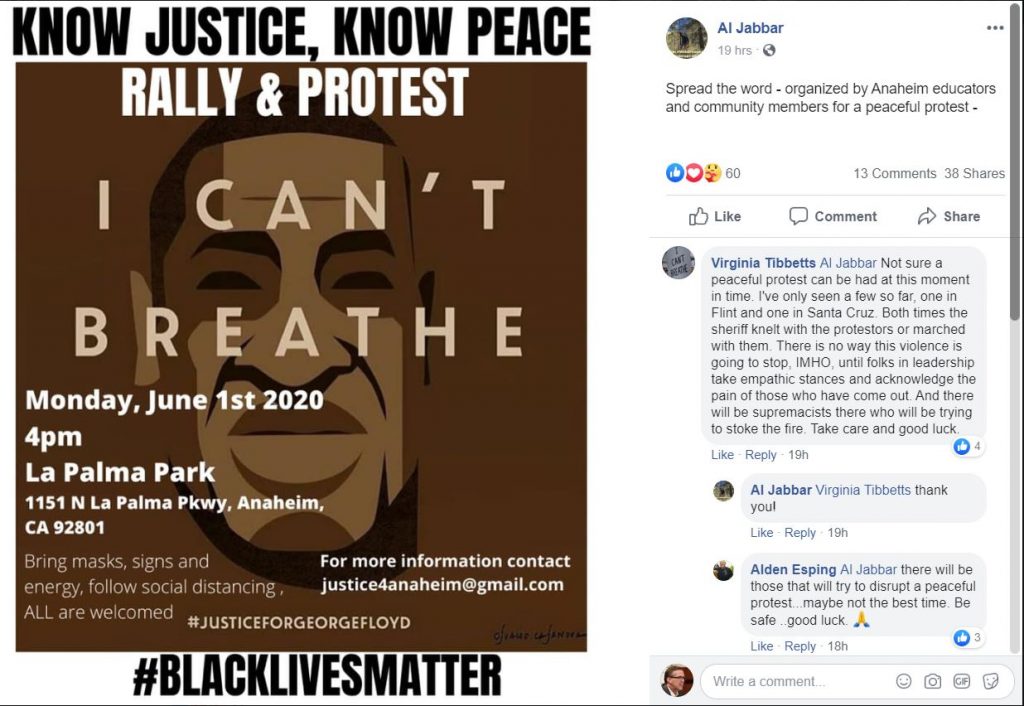 Commenters on Jabbar’s post and other places it is shared have expressed strong doubts about the wisdom of holding a protest now, given how all the instances of rioting and looting of the past few days have begun as peaceful protests. There are so many ways this rally can go sideways. The prudent, responsible thing would be for the organizers to call it off and re-schedule for a time when tempers have cooled.

Outside agitators are organ zing a “Fuck The Police” protest an hour later, at 5:00 p.m., by City Hall: 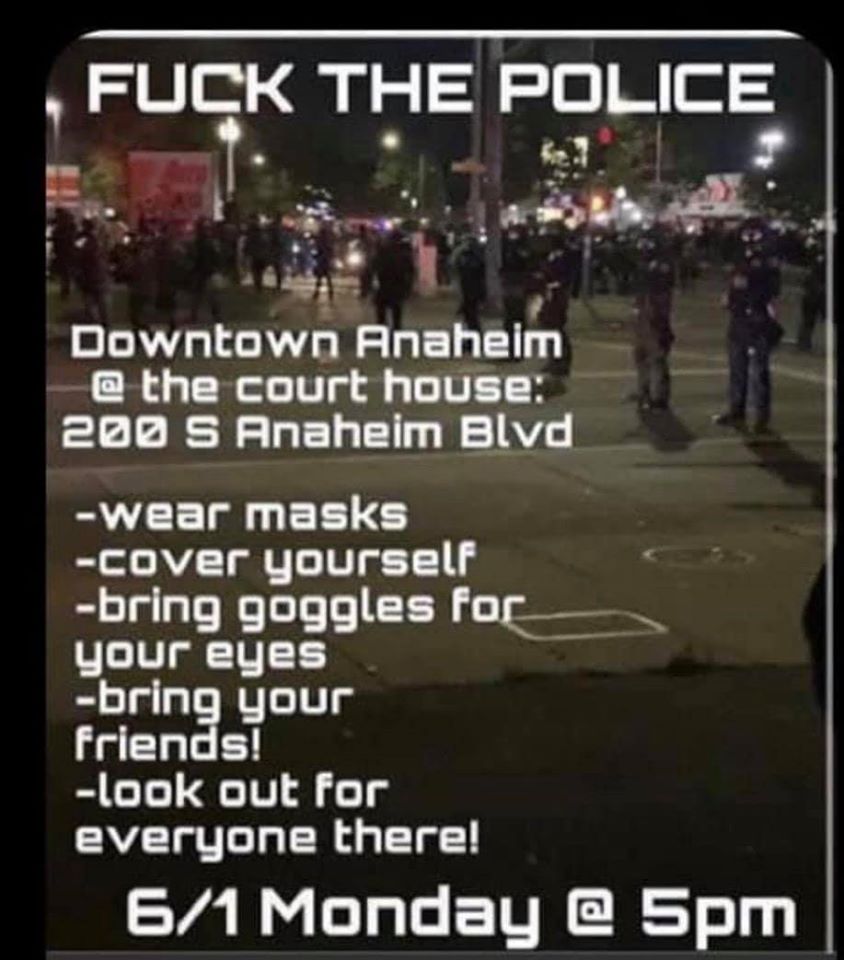 There is virtually no doubt this is being organized by violent extremists seeking – as they have in other cities – to exploit non-violent protest in order to carry out an agenda of rioting, mayhem and looting.  The flyer is nearly identical to the online flyer circulated for the protest-turned-riot in Santa Ana on Saturday night.  Progressive activists are active online seeking to discourage people from attending this protest. There is strong evidence the shadowy figures behind this protest are organizing a complementary protest at 7:00 p.m. at Harbor Boulevard and Lincoln Avenue, as well as an anti-police riot at the MainPlace Mall in Santa Ana tonight at 8:00 p.m.  Someone going by the online handle “spensas_gee” appears to be responsible for promoting these protests:

The person who posted this on ig @/spensas_gee has anti black stories and posts and promoted looting while not affiliated w BLM at all https://t.co/w7CSvGwBcv

These people are very organized and coordinate closely with each other. The sequential protests are probably a stratagem to divide and disperse law enforcement resources.

Paranoia Among Anaheim Leftists
Compounding the crazy, a group of Anaheim left-wing activist have been actively rumor mongering the wild claim that it is actually this writer who is organizing the “Fuck The Police” protest.  Orange Juice blogger Vern Nelson, Jose F. Moreno minions Jorge Gavino and Luis Zuniga, as well as a online gadfly named Fernando Gonzalez, have been flogging this absurd claim since yesterday.

The irony is I first spotted the “Fuck the Police” flyer on Zuniga’s “Anaheim Watch” Facebook page, where it had been posted by…Fernando Gonzalez.

Dishonest is, as dishonest does.

Stay Safe, Stay At Home
A number of downtown businesses are doing what they can to prepare for the worst case scenario this evening bu boarding up windows and other precautions, while hoping for the best.

The best outcome would be