Resort Unions Oppose Re-Opening Disneyland Resort. Do They Speak For Their Members?

Last week, the Coalition of Resort Labor Unions (CRLU) sent a letter to Governor Gavin Newsom opposing the phased re-opening of the Disneyland Resort beginning on July 9 with the re-opening of Downtown Disney.

The CRLU is comprised of a dozen unions with a combined membership of 17,000 Resort workers, who have been unemployed since mid-March when the Disneyland Resort shut down due to the COVID-19 pandemic, claiming unanswered “questions” about health and safety.

Disney has published rigorous plans and protocols to protect the health of both cast members and guests, and has already acquired significant experience in re-opening it’s theme parks in Asia.

There’s another – and significant – unanswered question raised by the CRLU’s letter: did these unions check with their unemployed members before publicly opposing plans to allow them to resume working?

A cast member posted this on his Facebook page upon learning of his union’s opposition to re-opening the Disneyland Resort: 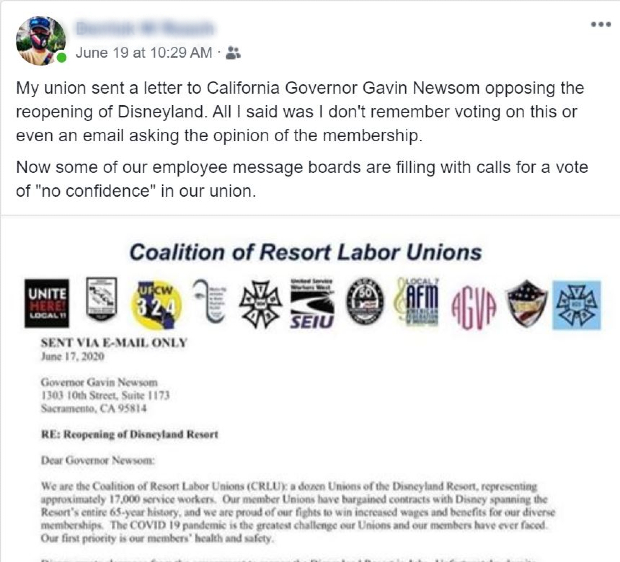 The cast member took the union coalition to task for failing to consult members on such a vital matter before deciding to speak on their behalf: “I don’t remember voting on this or even an email asking the opinion of the membership.”

The cast member also noted rising dissatisfaction among union members over the their leadership’s highhandedness:

“Now some of our employee message boards are filling with calls for a vote of ‘no confidence’ in our union.”

Nine weeks is a long time to be unemployed. The question of whether not your members have jobs and the opportunity to go back to work is a pretty fundamental one for a labor union. It’s astonishing that CRLU unions would not only publicly urging the Governor to, in effect, prevent their members from going back to work – but fail to consult with their membership before doing so.

Perhaps that is why CRLU member unions like UNITE-HERE Local 11 have met with massive failure in their attempt to get their members to pay dues during the pandemic.

When weighing the CRLU’s request, Governor Newsom ought to remember 17,000 members of the CRLU unions were not asked their opinion in the matter.