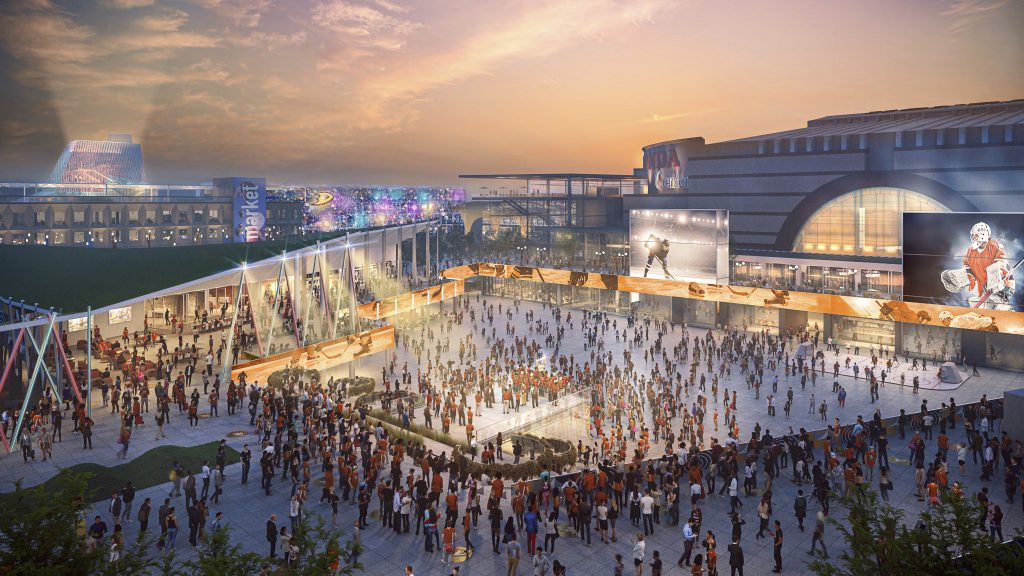 The Samueli family, owners of the Anaheim Ducks, yesterday announced plans for ocV!BE: a $3 billion, 115-acre, mixed-use, live entertainment development planned for completion in 2024. The ambitious project will create an estimated 13,000 construction jobs and 3,300 permanent jobs. It will also generate $2 billion in one-time economic impact and $400 million in annual recurring economic impact.

The project will be anchored by the Honda Center, and feature:

ocVIBE! is billed as a “sustainable community emphasizing walkability, health and wellness, and lifestyle amenities near transit.” A network of pedestrian bridges and walkways, including a landmark bridge over Katella Avenue, will connect the district. 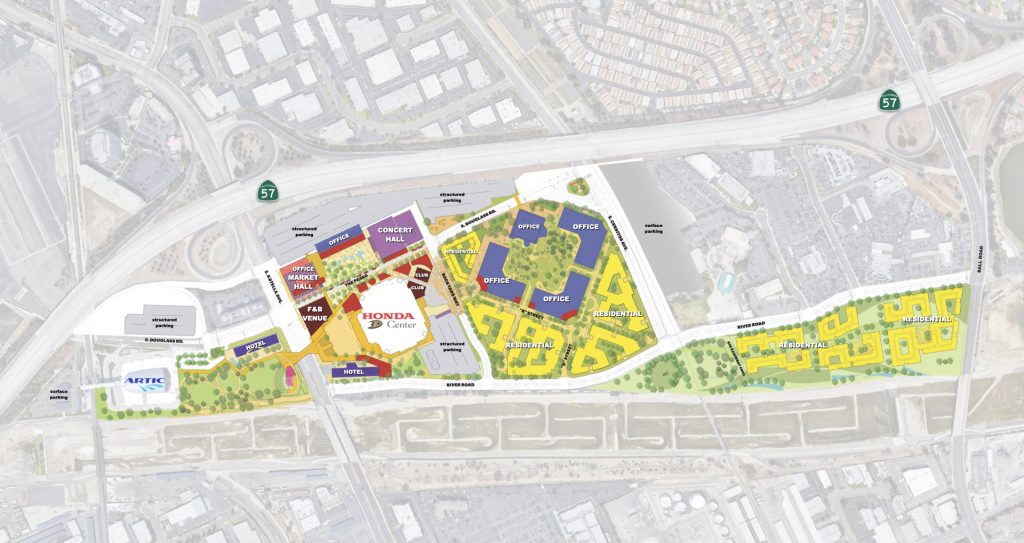 “ocV!BE will provide a live, work, and play community of a scale not seen in Orange County, with live entertainment events and activities year-round,” said Tim Ryan, CEO of newly created ocV!BE Sports & Entertainment, LLC, which will manage the development and operation of the district.

You can see more details and visuals about ocVIBE! by visiting the website. 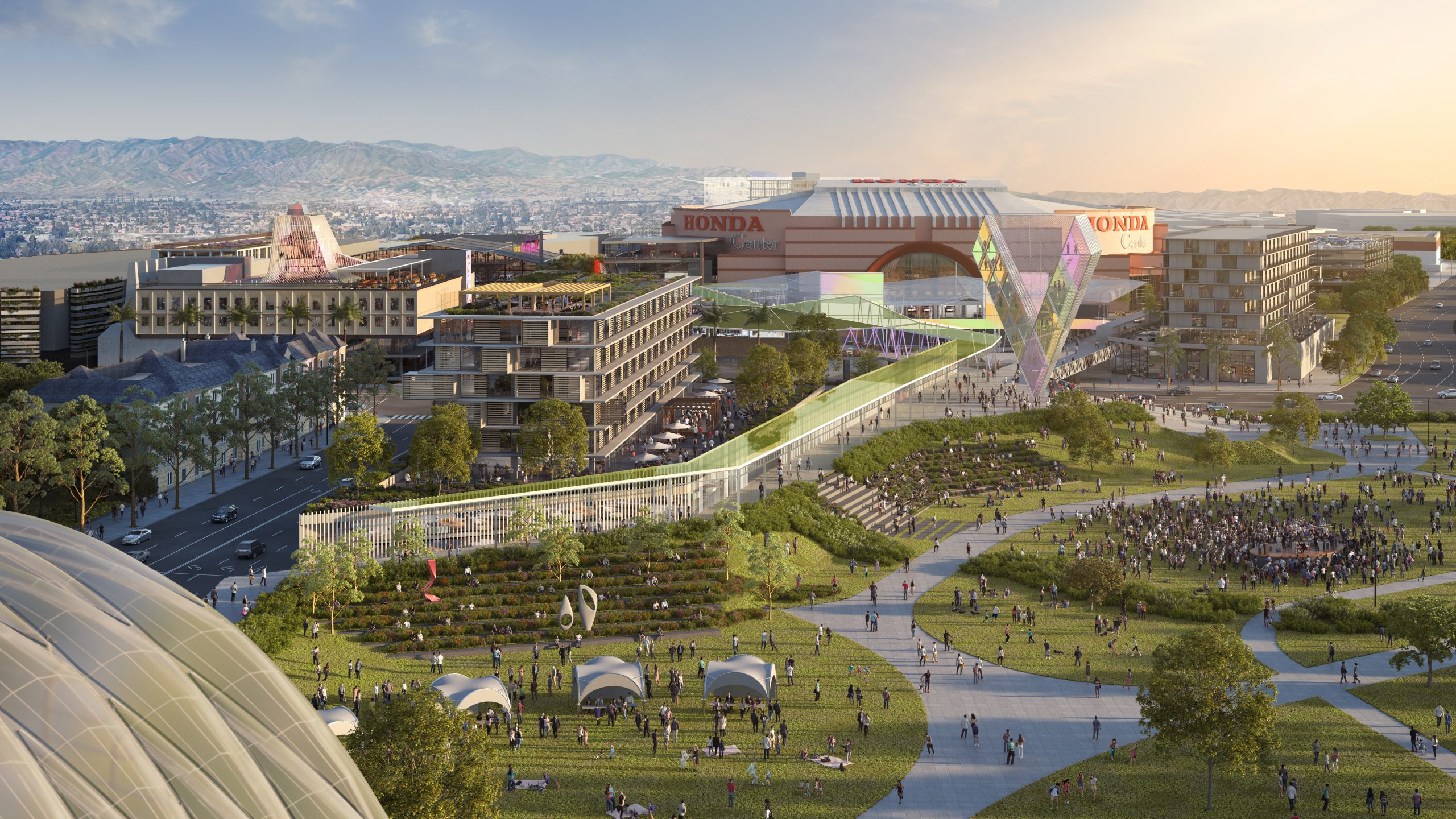 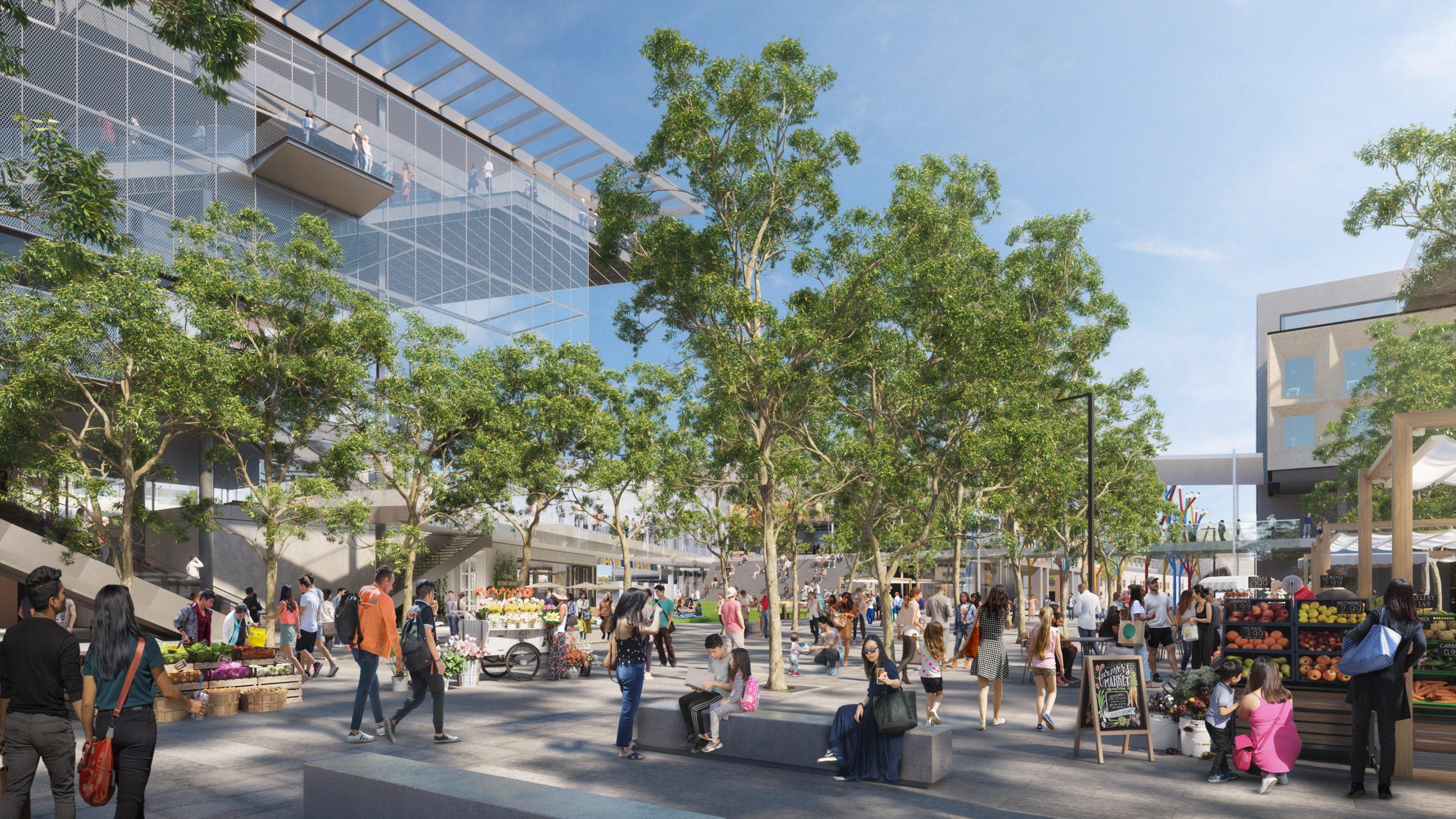 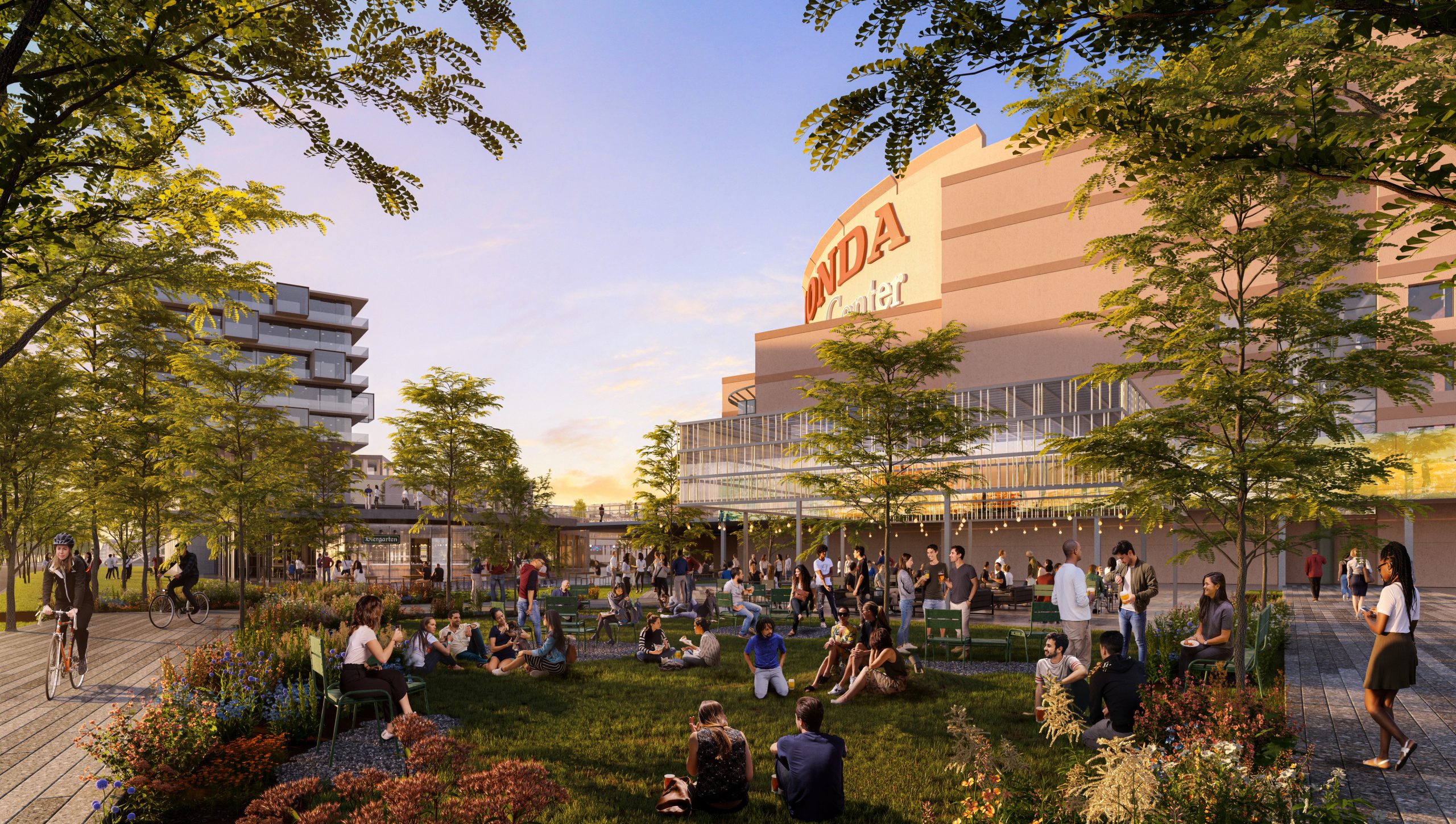 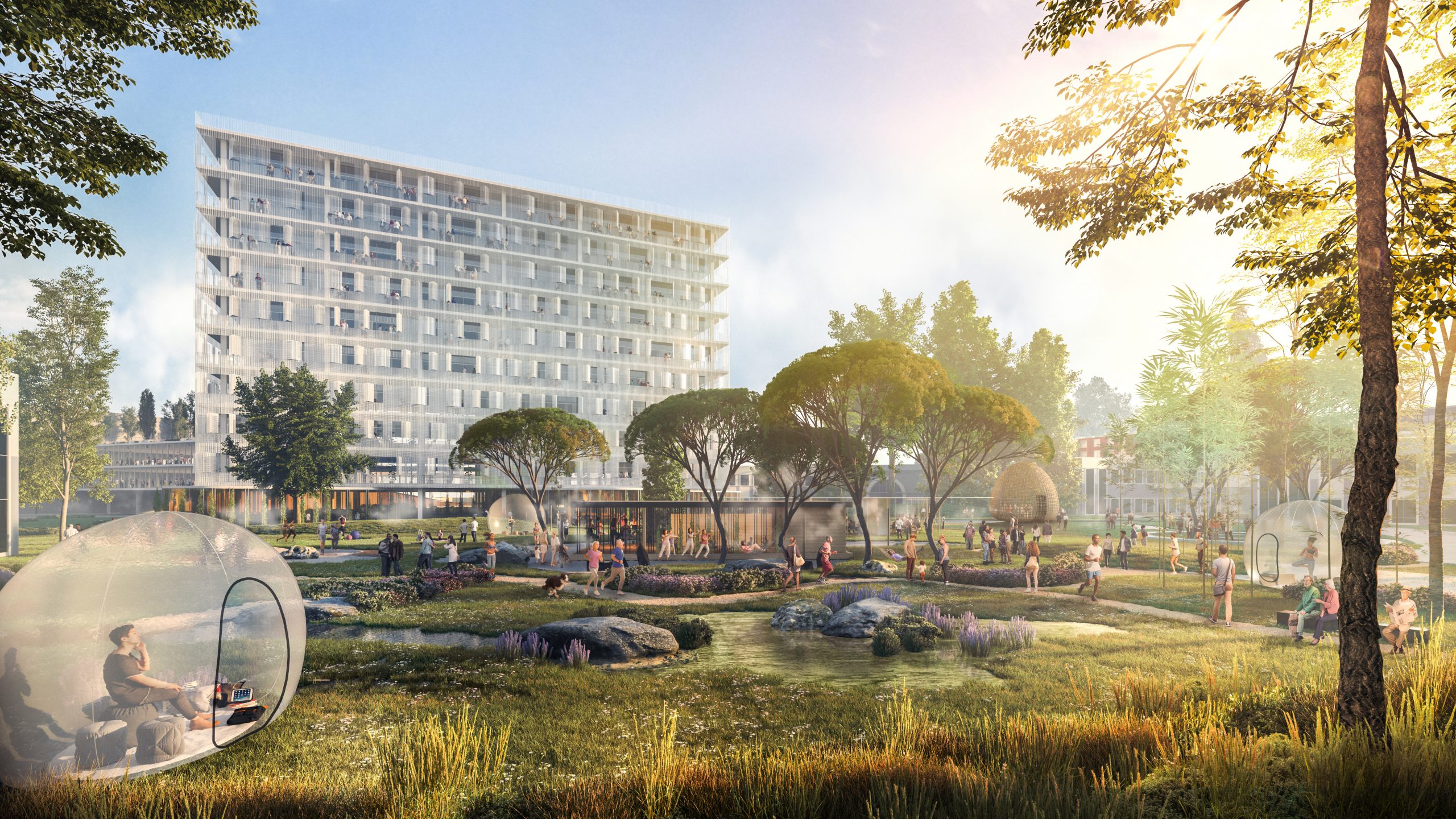 ocVIBE! is the fruition of planning that began with Samueli-owned Anaheim Arena Management purchasing the land around the Honda Center from the city for $10 million in late 2018. Under that agreement, the Anaheim Ducks also agreed to continue playing at the Honda Center until at least 2048, and to keep the name Anaheim Ducks. Other stipulations of the agreement included an AAM affiliate taking over operational responsibility for ARTIC, relieving the city of the of a $2.5 million operating deficit and agreeing to profit sharing with the city if ARTIC ever turns a profit.

The project entails a number of dramatic changes to the current city-scape around the Honda Center. For example, the main ARTIC parking lot will be converted into public park space, while the industrial buildings across Douglass Road fromt he transportation center will make way for a parking structure.  The small retail/restaurant center at the corner of Katella and Douglass will be replaced by one of the two planned hotels.

Acreage to the rear of the Honda Center will become a mixed-use area of offices and residential.  Former OC Water District property boundaried by River Road, Ball Road and the Santa Ana River will also be developed as residential.

It will be a remarkable transformation of the area, and when taken together with the adjacent development proposed by Angels owner Arte Moreno, the promise of the Platinum Triangle will be fulfilled, in spades.

[Editors Note: an earlier version incorrectly stated the Phoenix Club property was part of the ocVIBE! development; it is not. Also, we are unclear whether the Rancho Del Rio stable and equestrian center will be included in this project. Our soruces indicate it will be re-developed, but the timeline is undetermined.]