The nationwide spirit of radical iconoclasm that has already led to toppling or removal of statues of American icons such as Presidents Abraham Lincoln, Ulysses S. Grant and Teddy Roosevelt now has the Anaheim High School mascot in its sights.

Here’s are the offensive AHS mascot and coat of arms: 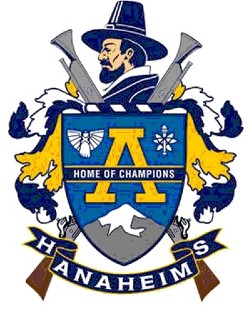 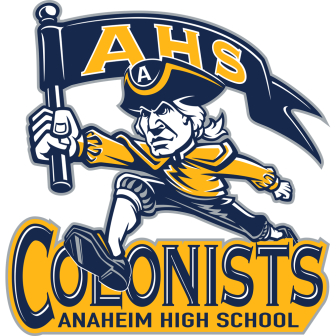 The petition, written by Luevano, argues the Colonist “perpetuates and glamorizes genocide, racial violence, and Anaheim’s historically racist past as a hub for white supremacy.”

Luevano, a student at UCI, claims that colonists, rather than being “heroes” who founded what became the United States are, in fact, villains who are guilty of “enforcing their societal expectations on indigenous people” and are “directly responsible for the mass genocide of native populations.”

“We cannot keep this mascot as it is a constant reminder of the trauma natives endured at the hands of colonizers. Our ancestors did not experience cultural genocide, assimilation, and exploitation for us to embrace this racist symbol. Alumni and current students alike do not embrace this mascot. We feel shame and rejection. And we demand this mascot be permanently removed from Anaheim and replaced with another more inclusive identity that represents our community.

The authors created their own gnarly graphic depicting a genocidal white colonist – reminiscent of the ritual daily vilification of Emanuel Goldstein in the Two Minutes Hate in Orwell’s “1984”: 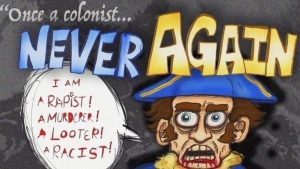 You can read the full petition – pseudo-historical claptrap infused with Ethnic Studies ideology – by clicking here. It currently has 2,021 signers.

Recently, there was a petition started to change the namesake or mascot of Anaheim High School in Anaheim, California. The basis of this claim was because this person, Laura Luevano believes that it represents the colonists that came to America, and of course she wants to jump on the bandwagon with all the other history revisionists that want to remove and destroy our history. This is a ongoing problem in this country where people are literally going from city to city, school to school, landmark to landmark and such, complaining, whining and attempting to remove or change names or history of various locations because it offends their sensibilities.

Their petition states: “Colonists are historically depicted as heroes who founded our society by “discovering” land and enforcing their societal expectations on indigenous people. In reality, they are directly responsible for the mass genocide of native populations.”

She also goes on to state that the term “Colonist” is “an ill-fitting mascot for Anaheim High School. It absolutely does not represent the school or its students. It perpetuates and glamorizes genocide, racial violence, and Anaheim’s historically racist past as a hub for white supremacy.”

If Ms. Luevano knew anything about Anaheim History, she would know that the reference to “Colonists” at Anaheim High School was not about the early Colonists to the new world, it was named after the early settlers who came here in 1857 to start Anaheim. The definition of a colony is as stated: “a group of people of one nationality or ethnic group living in a foreign city or country.”

You see the settlers were predominately of German birth, although other Europeans did eventually settle there as well. So, their use of the term “Colony” was not associated with any other reason other than that. Besides that, these settlers did not take part in any kind of genocide against the native peoples of this area, or any other groups of people for that matter. They also didn’t “discover” the land they built on. Doing a little research on the subject, and having something I like to call “common sense,” proves that none of Ms. Luevano’s statements in her petition wording are applicable to this subject at hand.

For those of you who are unfamiliar with our local history, let me give you a little history lesson:

Anaheim High School was established originally in 1898, when the very first students attended classes in an upstairs room on the second floor of the Central School (which no longer exists). By 1901, the funds had been appropriated to construct and finish the new high school. There has been more than one location for the high school over the years, but the name has not changed.

The term “Colonist” has always represented the early settlers who founded the “Mother Colony” of Anaheim. The Los Angeles Vineyard Society which was established specifically for this purpose, sent George Hansen to the area to purchase a small amount of land (1,160 acres) from Juan Pacifico Ontiveros in 1857. Ontiveros owned the Spanish Land Grant  “Rancho San Juan Cajón de Santa Ana” (which consisted of 35,971 acres in its entirety). The Ontiveros family were deeded that land from Mexico by Governor Juan Alvarado in 1837.

From its very beginnings, Anaheim consisted of (German) European and Hispanic settlers, many intermarrying within the community. A good example was Petra Ontiveros, daughter of Juan Pacifco Ontiveros, who married Augustus Langenberger.  Langenberger came to the United States from Germany in 1849. In 1850, Augustus married Juan Ontiveros’ daughter, Petra. He also became the very first merchant in Anaheim’s history.

Another example is the Rimpau family. Theodore Rimpau also came from Germany, arriving to California in 1848. He traveled from San Francisco to Los Angeles, where he eventually became very good friends with the Alcade of Los Angeles, Don Francisco Avila, who was also one of the richest ranchers in Los Angeles. A native of Sinaloa, Mexico, Don Francisco owned the Rancho Las Cienegas and the the Avila Adobe on Olvera Street (which is the oldest standing house in Los Angeles).

After asking Don Francisco for permission to marry his daughter, Theodore Rimpau and Francisca Avila were married December 23, 1850 at the Church known as La Iglesia de Nuestra Señora la Reina de los Ángeles.  After the marriage, Don Francisco put Theodore in charge of many responsibilities in the family, including supervising the family estate while living in Los Angeles. By the mid 1860s, the Rimpau’s moved from Los Angeles to Anaheim settling there and establishing roots that would last generations.

Going back to the subject at hand, as you can see, from Anaheim’s very beginnings it was a mixture of European and Hispanic culture and many of the descendants of the original settlers were of mixed heritage being both of Hispanic and European (mainly German) descent.

The High School’s mascot was named for the “Colonists”- (aka the Settlers) who set up the “Colony of Anaheim” so long ago. Thus the term Colonist was used. Do not remove our history based on the assumptions and misinformation (and lack of education) of the younger generation today who think it is okay to remove something if it offends them, even if they are completely ignorant of the real history to begin with.

The colonist name does not represent anything negative in Anaheim history whatsoever and I demand that the Anaheim Union High School District dismiss the nonsense of Ms. Luevano’s claims. Perhaps instead they can direct her to the MUZEO to speak with the historians there, so she can read up on Anaheim’s real history, instead of fabricating her own and misleading the public with her own ignorant and very uneducated views.

Author, Historian and the founder of “The History of Anaheim” Facebook History Group.

“Although rightfully angered, we will not allow them to harass us in this manner,” thunders Alatorre De-Lira.

This is the zeitgeist of the woke, multi-cultural Left: everything is racist, symbols viewed as contrary to their worldview must be expunged, and disagreement with their cultural Marxism is harassment and slander.