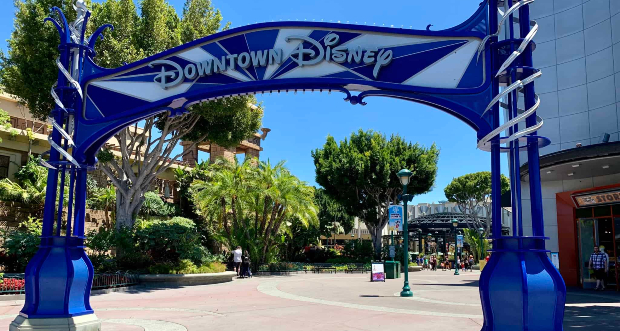 The Downtown Disney retails and entertainment district will re-open tomorrow, July 9 – the first in a multi-phased re-opening of the Disneyland Resort, which closed in mid-March as the COVID-19 pandemic took hold.

26 storefronts will be part of the initial re-opening:

Health and Safety Protocols In Place
The Disneyland Resort is implementing a slew of health protocols to protect both guests and employees from COVID-19.

The Resort has erected white tents at both entrances to Downtown Disney where guests and employees will have their temperatures checked prior to being admitted into the shopping and entertainment district. 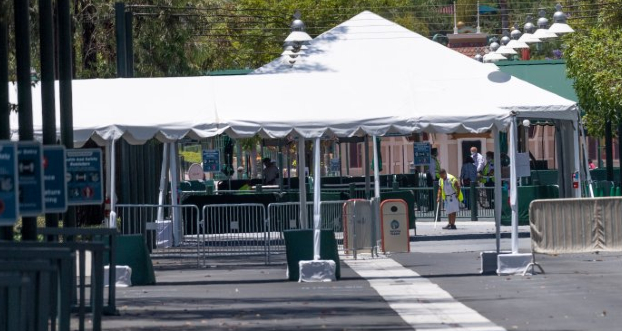 Visitors can park in the Simba lot at Disneyland Drive and Katella Avenue, and then enter white tent near the Disneyland Hotel and Earl of Sandwich restaurant.

Alternatively, they can come from the ride-share drop-off on Harbor Boulevard and enter the retail district at the white tented checkpoint between Disneyland and California Adventure. There will be no entry from the parking lot behind the ESPN Zone.

The Disneyland Resort was already planning to require the wearing of face masks, prior to the state and local governments making them mandatory in public. They will be mandatory for anyone age 2 and older. According to Downtown Disney re-opening rules, face masks must be hands-free, snug fitting, secured with ties or ear loops and cover the nose and mouth. Costume masks will not be allowed.

Other health protocols include reduced attendance capacity, social distancing and enhanced sanitization procedures. “Guest Experience Teams” will roam the district to explain the safety protocols to guests and encourage adherence to them.

A complete rundown of protocols and procedures, and other information on the Downtown Disney re-opening, is available here.

Tomorrow’s re-opening was originally announced as part of a phased re-opening plan for the entire Disneyland Resort. However, the planned July 17 re-opening of the Disneyland and California Adventure theme parks has been indefinitely postponed until pending positive action by the state government. The four month closure has thrown tens of thousands of people out of work, shut down Anaheim Resort hotels and associated businesses, and taken a huge chunk out of city revenues, necessitating severe budget cuts.