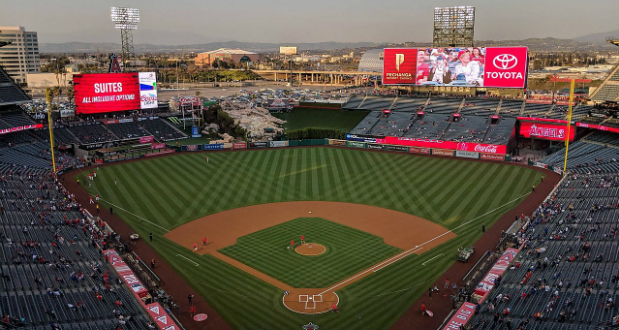 Major League Baseball will begin playing a truncated 2020 season in fan-less stadiums nest week. The Angels kick off their season with a home opener at Angel Stadium on July 23 against the Oakland A’s.

The 2020 season is off to such a late start due to the COVID-19 pandemic.  Training camps only opened two weeks ago, and teams could play up to three exhibition games prior to the July 23-24 opening of the season. Players will earn approximately 37% of their salary, assuming the 60-game season is completed.

MLB players will their temperatures taken, and be tested for COVID every other day – unless their temperature is over 100.4%, in which case they’ll be tested and sent home. On the first round of testing, 31 players and seven staffers tested positive for COVID-19: a 1.2% of 3,185 samples collected.

The shortened season takes place against recently unveiled ambitious plans by Arte Moreno-led SRB Management to transform the 153-acre Angel Stadium site into a complex of entertainment, residential, commercial, retail and hospitality uses with innovative public spaces.  It will feature 2.7 million square feet of officer space, 5,175 housing units, two hotels with a combined 943 rooms, a 5-acre urban park, plus another five-acres of linear parks, landscaped paths and playing fields, and a total of 1.1 million square feet of restaurants, retail and entertainment in two hubs flanking the stadium. 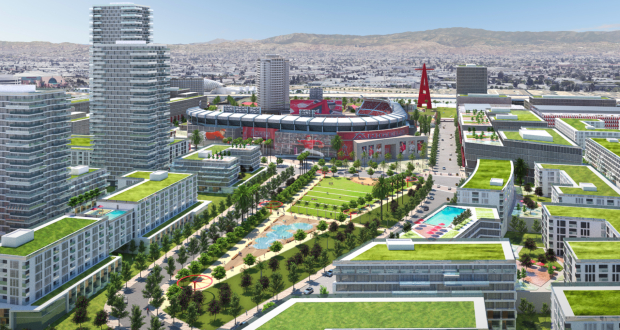 During the construction phase, it will create an estimated 30,264 good-paying jobs and generate $5 billion in economic activity

After build-out and during the course of 30 years, the Angels development will create 45,300 new jobs (exclusive of stadium jobs), and generate $1.2 billion in General Fund revenues – including $443 million in hotel and bed taxes.

This past December, Anaheim approved an agreement for SRB Management to buy the Angel Stadium site for $325 million – several million above the appraised value of the site. Once the deal closes, the city will be out of the stadium business, and the financial responsibility for either a new or modernized stadium will rest entirely on SRB Management.