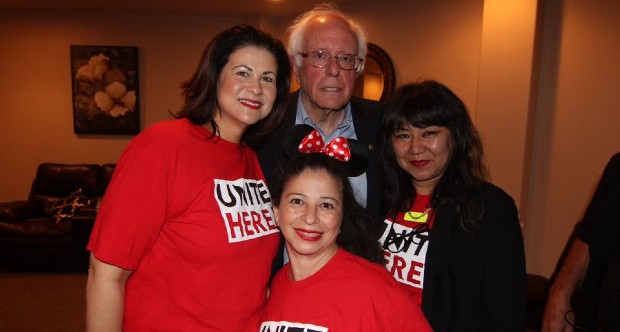 Local 11 ‘s other co-president is Ada Briceno, an active player in Anaheim politics who also serves as the chair of the Orange County Democratic Party.

Minato was also one of the protestors who disrupted the NAMM Convention last year by shutting down the busy intersection of Katella and Harbor in the Anaheim Resort.  She and 19 others – including Briceno and Councilman Jose F. Moreno – were arrested and are awaiting trial.

Although 90% of Local 11 members have been thrown out of work by the COVID-19 pandemic, the union is still trying to get them to pay their monthly dues.

Last year, we reported that Local 11 Co-President and International Executive Vice President Susan Minato had her husband on Local 11’s payroll as a well-paid IT consultant. The union failed to disclose the apparent conflict of interest; that’s likely because Griffith is not considered a “key employee,” despite earning the same, if not more, than other high-ranking Local 11 staff.

The union’s latest financial disclosure brings more news: Not only is Minato’s husband Gregory Griffith still being paid by Local 11 — 2019 was his most lucrative year yet. Last year, the union paid him a total of $98,762. He earned $85,484 the year before. Since 2014, Griffith has earned almost a half a million dollars as an “IT consultant” for Local 11.

Is Griffith’s pay reasonable? As it turns out, another in-state Unite Here local in San Francisco has been paying an IT contractor for what appears to be similar contract work since at least 2014 — the same year Griffith started receiving payments from Local 11.