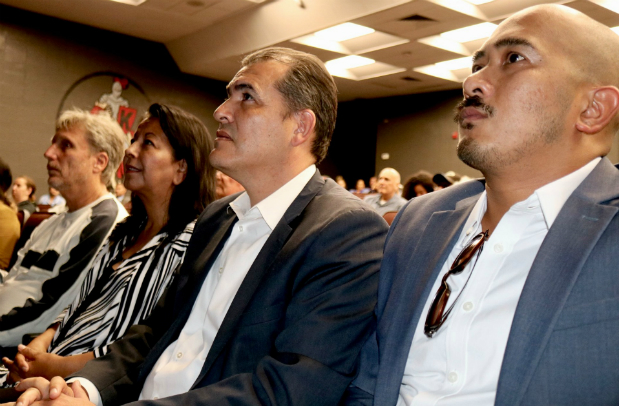 District 1 Councilmember Denise Barnes has effectively ended any doubts she would seek re-election, filing her intent to run paperwork with the city clerk on Friday, July 17.

Barnes was narrowly elected in 2016 with 27.3% of the vote, edging out Steve Chavez Lodge by 291 votes. She was plucked out of obscurity by former Mayor Tom Tait as his hand-picked candidate. During the first two years of her term, she sat next to Tait on the dais and took her voting cues from him. She rarely spoke from dais except from prepared statements.

After Tait was termed out in 2018, Barnes has functioned as political wingman to the other remaining member of the short-lived Tait majority: left-wing Councilman Jose F. Moreno.  She has moved left-ward politically herself: supporting rent control, calling for new taxes, standing and clapping at a Bernie Sanders rally, attending Anaheim Democrat Club meetings, accusing council colleagues of “racism” when they don’t support her motions, and making common political cause with the effort by leftist Councilman Jose F. Moreno and his political coalition to seize control of the council in the November 2020 elections.

Barnes had been a lifelong Republican until last month, when she switched to the Democratic Party.  The Democrats have a large voter registration edge in District 1:  48.3% to 23.8%, with 23.2% registered as No Party Preference (NPP). That is actually a relative improvement in GOP registration, which has been narrowly lagging behind NPP.

The only other declared candidate is Anaheim Parks and Recreation Commissioner Ryan Balius, who is also active in the West Anaheim Neighborhood Development committee.

This is first bid for elected office by Balius, a long-time member of the Anaheim Parks and Recreation Commission who is active in the West Anaheim Neighborhood Development Council (WAND). First-time candidates without a deep background in political activism often struggle with a key aspect of running for office: fundraising.  Few people like asking for money, and fundraising is often an area in which otherwise solid candidates fall short.

Balius, however, was able to raise nearly $10,000 in the last part of 2019. That total is more impressive considering he put it together from smaller contributions of $100 to $200 dollars.

By contrast, when current District 1 Councilmember Denise Barnes was recruited to run in 2016 by then-Mayor Tom Tait, most of the first $15,000 she raised come from five $1,900 contributions from the Tait family and one of their rich allies.