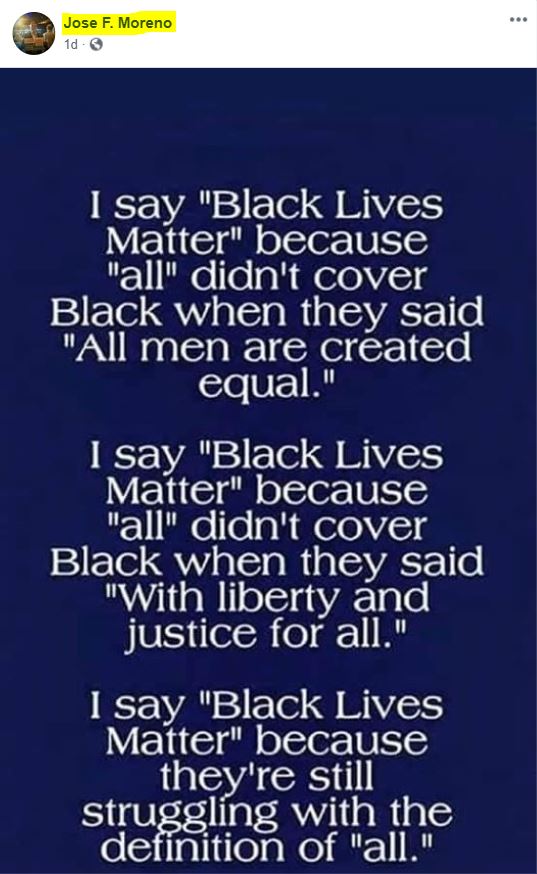 Councilman Jose F. Moreno posted this meme on Facebook on Monday. It is less a statement that Black lives matter – on that we can all agree – so much as claiming the American Founding was racist, and the signers of the Declaration of Independence did not believe its principles applied to all people, particularly Black people.

Moreno’s claim is unhistorical and demonstrably wrong. The Declaration’s author, Thomas Jefferson, stated repeatedly throughout his life that the principles contained therein – including the ringing phrase, “We hold these truths to be self-evident, that all men are created equal, that they are endowed by their creator with certain unalienable rights.”” – applied to all people.

Every man, and every body of men on earth, possess the right of self-government. They receive it with their being from the hand of nature.

The Declaration’s author wrote “all men” are created equal because he believed it. The signers affixed their names because they also believed – so much so that they pledged their lives, their fortunes and their sacred honor to defend them. .

Did a number of the signers own slaves? Yes. Was that contrary to principles of the Declaration? Of course. And yet, they meant it. They could have approved and signed a Declaration only white men, or Englishmen, or Europeans, were created equal. After all, the document’s stirring preamble was unnecessary for the purposes of declaring independence from Britain; the list of specific grievances following it would have sufficed for that purpose.

Yet, the Founders went further, and publicly staked their lives and their new nation’s future on the universal principle that equality is the unalienable right of all people, everywhere.  That was a revolutionary thing to say in that era.

The above meme’s claim, endorsed by Councilman Moreno, is that the Declaration of Independence didn’t really apply to Black people because the American colonies – particularly in the South, allowed slavery.

Woke progressives are not the first to argue the Declaration applied only to whites. Indeed, they’re essentially recycling the same arguments made during by salver apologists attempting to defend and extend the “peculiar institution” during the antebellum era. Like today’s Left, apologists for the Slave Power said “all men are created equal” did not apply to Blacks because many of the signers owned slaves – and therefore could not have meant it to encompass Blacks. Like the contemporary Woke activists, slavery apologists viewed the Declaration as outdated, an artifact that served its purpose in 1776  but must make way for more modern governance. Like today’s progressive Left, Chief Justice Roger B. Taney, author of the Dred Scott decision, contended the Founders didn’t think of slaves as men.  Other acolytes of the Slave Power, such as Alexander Stephens (who became Vice President of the Confederacy), admitted the Founders included Blacks in the Declaration’s promise but criticized that belief as mistaken.

No less a proponent of slavery than John C. Calhoun, the intellectual godfather of secession, condemned Jefferson for his belief in the equality as a natural right. Calhoun excoriated Jefferson for the “great error” giving equality “a place in the declaration of our independence.”  Calhoun complained the belief that Blacks “were as fully entitled to both liberty and equality as” whites had a”strong hold on the mind of Mr. Jefferson” and bemoaned that “[Jefferson’s] proposition to exclude slavery from the territory northwest of the Ohio may be traced, and to that the ordinance of ’87” back to Jefferson’s conviction that to withhold liberty and equality from Blacks “was unjust and immoral.” If Thomas Jefferson had intended the Declaration apply only to whites, Calhoun would never have singled him out for derision.

The greatest opponent of such historical revisionism was Abraham Lincoln. Throughout his political life, Lincoln pushed back against the revisionist and reminded Americans that the Declaration’s principle of equality was “applicable to all men and all times,” that such was the intent of the document’s author and signers.

According to Lincoln, the American Experiment depended on “the spirit which prizes liberty as the heritage of all men, in all lands, every where.”

“They [the Founders] meant to set up a standard maxim for free society, which should be familiar to all, and revered by all; constantly looked to, constantly labored for, and even though never perfectly attained, constantly approximated, and thereby constantly spreading and deepening its influence, and augmenting the happiness and value of life to all people of all colors everywhere.”

His great political rival, Stephen Douglas, argued that when the Founders said “all men are created equal,” they really just meant that royal subjects in America were the political equals of royal subjects in Britain. In other words, it only applied to those living in the colonies at the time of independence.

Not so, countered Lincoln, affirmed the transcendence of the Declaration’s principles by explaining how they connected the millions who had immigrated to America with the Founding generation:

“If they look back through this history to trace their connection with those days by blood, they find they have none, they cannot carry themselves back into that glorious epoch and make themselves feel that they are part of us, but when they look through that old Declaration of Independence they find that those old men say that “We hold these truths to be self-evident, that all men are created equal,” and then they feel that that moral sentiment taught in that day evidences their relation to those men, that it is the father of all moral principle in them, and that they have a right to claim it as though they were blood of the blood, and flesh of the flesh of the men who wrote that Declaration and so they are. That is the electric cord in that Declaration that links the hearts of patriotic and liberty-loving men together, that will link those patriotic hearts as long as the love of freedom exists in the minds of men throughout the world.”

It is an article of faith among identity politics activists that American Founding was rotten, premised on preserving slavery and that America is racist from top to bottom. This belief is fundamental to their ideology.

It is also wrong, anti-historical, ignorant and malicious. The truth of the American Founding is under greater domestic attack than at anytime since before the Civil War. It is a bitter irony that woke ideologues and BLM activists are trying to de-legitimize the Founding using the same arguments employed by antebellum defenders of slavery – yet unsurprising given their warped and inadequate understanding of their country’s history.

These days, when our culture is being flooded with nonsense that undermines informed patriotism, it is vital that we speak out. When a councilman from Orange County’s largest city propounds the dishonest and corrosive idea that the Declaration did not apply to all people, he should be called out. Councilman Moreno ought to more thoroughly immerse himself in the history of his country, instead of imbibing Howard Zinn’s ahistorical quackery.

“Clarify”? What Moreno and his identity politics co-religionists are doing is obscuring. What’s sad is that someone elected to provide quality education to AUSHD students is so blinkered by ideology and ignorant of her country’s founding document. If she doesn’t understand the Declaration, how can she ensure AUSHD students do? You can’t give what you don’t have.

By the way, Randle-Trejo is running for Anaheim City Council from District 4 with Moreno’s blessing.

Black lives do matter. And our nation was founded on the principle that the lives of Black people matter equally as any other lives. To say so is not to ignore that many of the Founders acted contrary to the principles they endorsed by owning slaves. Neither did they try to rationalize that contradiction by renouncing the natural right to equality. By the same token, woke progressive claim “Black Lives Matter” while vocally opposing policies such as charter school expansion that offer the opportunity to rise to disadvantaged Black children trapped in failing schools.

Obviously, this is not to compare the intrinsic evil of slavery with any contemporary obstacle to advancement. It was, as many have noted, the original sin of the American Founding. And that stain on our nation’s history makes it even more important to reject the revisionism promoted by politicians like Moreno and Randle-Trejo. If their revisionism – and that of Calhoun and Douglas and Stephens – were correct, there would have been no Civil War, no Reconstruction Amendments, no Civil Rights Acts or Voting Rights Acts. If the revisionists were correct, there would have been no effective opposition to the expansion of slavery; no moral basis for Martin Luther King calling on the country to honor its “promissory note” by dismantling Jim Crow and extending full civil rights for Black Americans. It is vital for the proper historical education of young Americans that we reject this dangerous interpretation.