The District 5 council race is the scene of some questionable vote-buying by the Kenneth Batiste campaign, plus a related bout of left-wing cancel culture.

On Facebook this Sunday, Yesenia Rojas, a union member and community activist who has generally sided with the Tait-Moreno side in Anaheim’s civic battles, called out left-wing blogger Vern Nelson for putting Kenneth Batiste campaign flyers inside food boxes and distributing them in low-income neighborhoods: 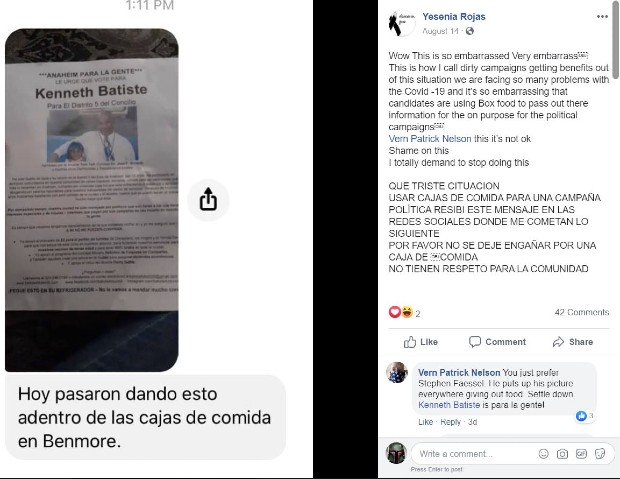 The Batiste campaign flyer is in Spanish and urges recipients of the food boxes to vote for him in November, and post it on their refrigerators so others get the message. It doesn’t include a campaign disclosure on the flyer. This could reasonably seen as vote-buying with food packages, and the law forbids providing voters with material inducements in exchange for their vote.

Others pointed out the questionable legality and ethicality of Nelson’s campaign tactics:

But did anyone really need to tell Nelson he was crossing an ethical and possibly legal line? But for him, the real transgression was Rojas refusing to go along with the Nelson and the rest of the Moreno clique in backing Batiste. Breaking from groupthink isn’t tolerated. Nelson paternalistically admonished Rojas that he knows better than her what is in her own best interest:

How dare Rojas make up her own mind! George Grachen piled on with some “Dear Leader” flavored criticism, wondering how Rojas could possibly support Faessel since former Mayor Tom Tait endorsed Batiste ( a Democrat). Grachen accused her of being disloyal, manipulated and deluded for supporting Faessel over Batiste:

Keep in mind Grachen is the president of the conservative Anaheim Republican Assembly. Apparently, the irony of the ARA president criticizing Rojas for backing a Republican over a Democrat – given that Grachen’s position entails electing Republicans over Democrats.

Moreno minion Jorge Gavino jumped in with a helping of race guilt, saying Rojas is letting herself be used and baselessly accusing Faessel of harming Latinos and Blacks:

Another local leftist, Louis Zuniga, tries to excuse the Batiste campaign’s use of food boxes to garner voters by claiming it is no different than Councilman Faessel posting photos on social media of his assisting with fodd distribution efforts:

Actually, they are entirely different: unlike the Batiste campaign, Faessel isn’t passing out campaign literature and soliciting votes while helping distribute food to residents.

Zuniga also joined in the attempted shaming of Rojas, posting a screenshot of her posting on Facebook about upcoming food distributions – a masked Councilman Faessel is in the group photo. In Zuniga’s mid, that is apparently enough to brand Rojas an enemy of the people: 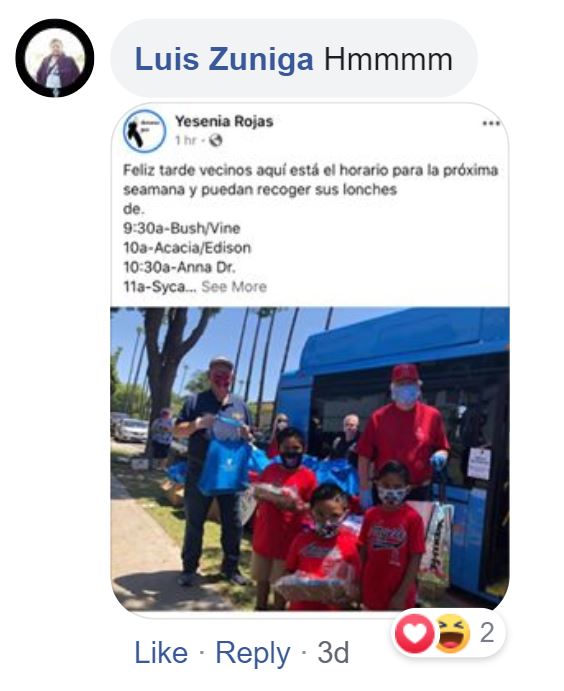 Luis Perez of the pipe fitters union tried to inject some sanity and perspective into the cancel culture denunciations of Rojas:

A valiant attempt, but it fell on deaf ears.

If nothing else, it’s a vivid illustration of the hive mentality of many of Councilman Moreno’s political acolytes: blatant vote-buying can be overlooked, but if you break ranks and refuse to tow the party line, be prepared for the Red Guard treatment.