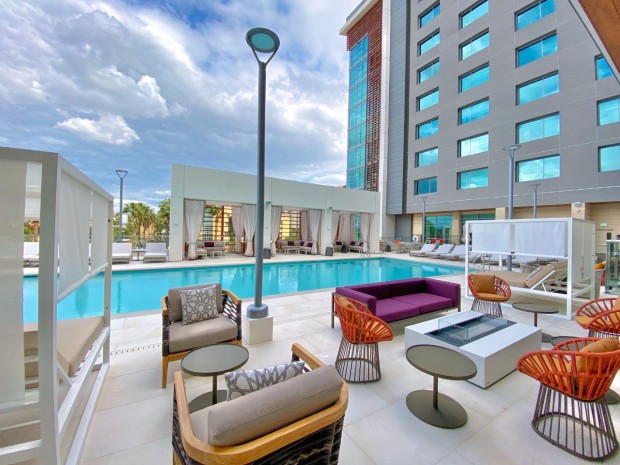 The JW Marriott, Anaheim Resort officially opened for business yesterday. It has been a long and difficult road for this beautiful property – the first 4-Diamond hotel to open in the Anaheim Resort since Disney’s Grand Californian Hotel opened its doors in January 2001.

The project was approved by the Anaheim City Council in early 2012. The developers, Ajesh Patel and Bill O’Connell, Sr., have had to contend with frivolous lawsuits filed by the unscrupulous UNITE-HERE Local 11, being unfairly vilified and harassed by former Mayor Tom Tait and current Councilman Jose F. Moreno and their followers. These union and political shenanigans failed to derail the hotel, although they not only increased project costs but also cost the City of Anaheim tens of millions in tax revenue by delaying its completion by several years.

Thousands of people were employed in good paying jobs during the construction of the enormous luxury property.  The JW Marriott Anaheim Resort will provide hundreds more good-paying, permanent jobs. The city will net hundreds of millions in tax revenue from the property – even when taking into consideration the TOT rebate incentive approved in 2013 in order for the 4-Diamond project to pencil out and be built.

Bill O’Connell, Sr. is a kind and decent man – a gentleman in every sense of the word. Despite years of unfair and unkind treatment at the hands of Mayor Tait and his allies in local politics and media outlets, he doesn’t stew in resentment. Frankly, he embodies the spirit of the “City of Kindness” slogan more fully than most of those who mouth it.

So it was both surprising and welcome at a November 2017 city council – where Tait and Moreno cynically attempted to use a routine consent item to sabotage the project – O’Connell took to the podium to call them out in his understated way:

Congratulations to Propera Hotels and O’Connell Hotel Group on weathering this long and artificially-created storm and opening a stunning property that will create jobs, opportunities for advancement, tax revenue for the city and generally contribute to the economic well-being of the city. The builders prevailed over the wreckers.