Magcalas And The COVID Exemption For Protests And Politics 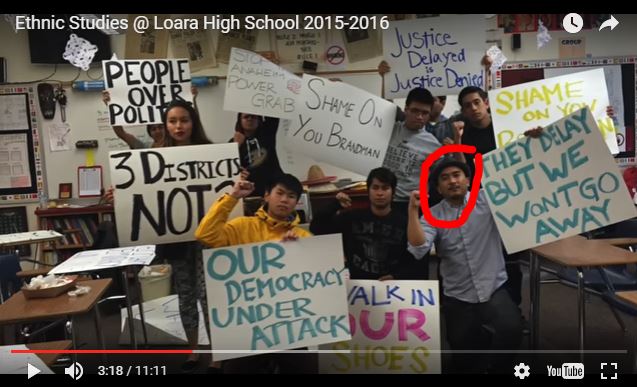 J. Paolo Magcalas is running for a second term on the Anaheim Elementary School District Board of Education from Trustee Area 3.  Readers may be familiar with Magcalas as a radical exponent of Ethnic Studies who thinks Thanksgiving is racist, supports gutting Proposition 13 and defunding the police (including school safety officers) and voted to spend nearly $1 million in taxpayer funds on a failed lawsuit to stop a group of immigrant families from converting Palm Lane Elementary into a charter school.

Macgalas is also an unelected elected official in the sense that he has never actually been on the ballot. He was the only candidate when he first ran in 2016, resulting in the Trustee Area 3 election canceled. Magcalas has never actually received a single vote from AESD voters.

In mid-July, Magcalas and the rest of the teacher union-dominated AESD Board of Education voted to go to distance-learning when school resumed in August, citing COVID-19 transmission concerns, leaving parents scrambling. After the vote, Magcalas said:

“My top priority has always and will always be the health and safety of not only our students, our staff, but our families and our neighboring community especially the elderly. I’m incredibly worried about, you know, COVID spreading even more.”

Magcalas wasn’t worried about spreading it a few weeks earlier when – well into the COVID-19 pandemic – he and other left-wing AUHSD teachers organized  hundreds of students for an anti-police protest in La Palma Park. They disregarded CDC social distancing protocols for limiting transmission of the virus, and quite a few protesters – especially speakers – went maskless. 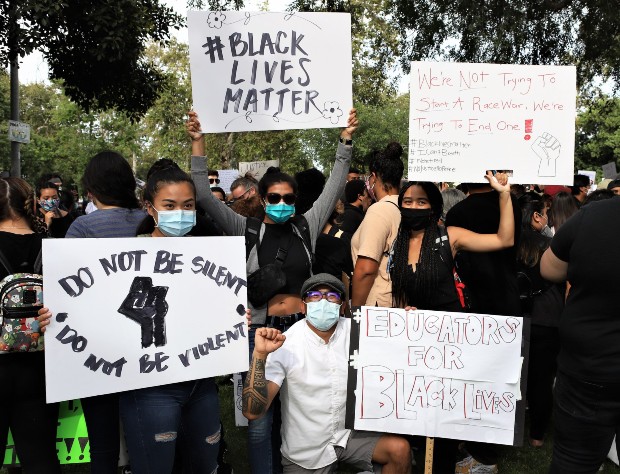 Masks aren’t a magic talisman that wards off the coronavirus; they help reduce the risk of transmission when used in conjunction with other protocols such as distancing, frequent hand washing and other measures. They can’t compensate for standing shoulder-to-shoulder with hundreds of people who are shouting and chanting together for more than an hour.

And those students have families and communities and elderly relatives and neighbors.

But like other woke Left activists, Magcalas carved out a “protest exception” to the fight against COVID-19 – and it continues undermining their credibility on the issue.

Perhaps sensitive on the matter now that he is running for a second term, Magcalas is posting on social media to assure one and all that he is taking it seriously: 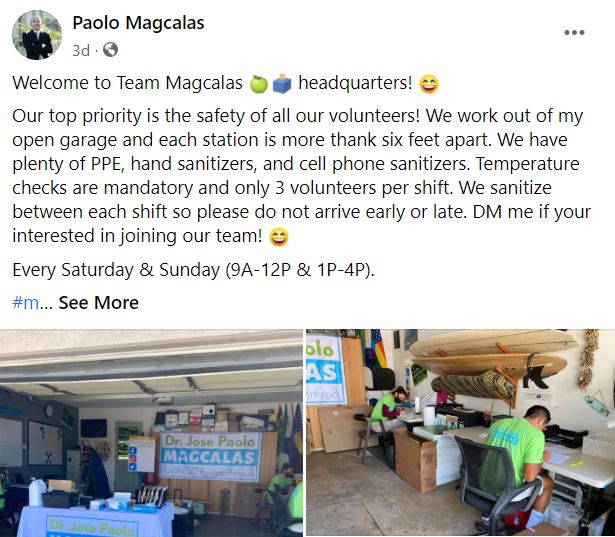 But is he?  The campaign photos he and his allies are splattering on social media show a maskless Magcalas hugging, holding hands with and exhaling at maskless children from the K-6th grade demographic – and no regard for COVID-19 protocols: 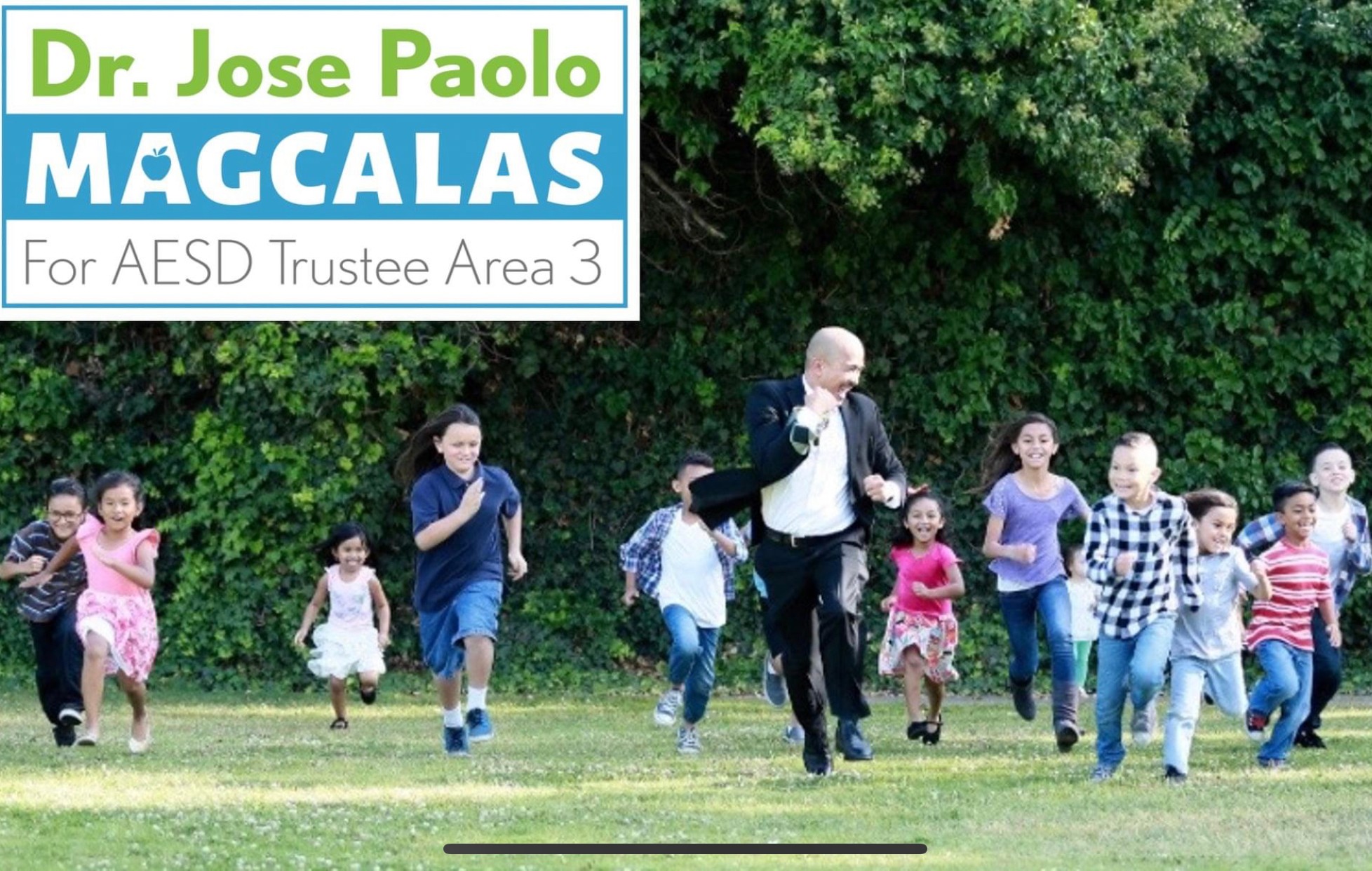 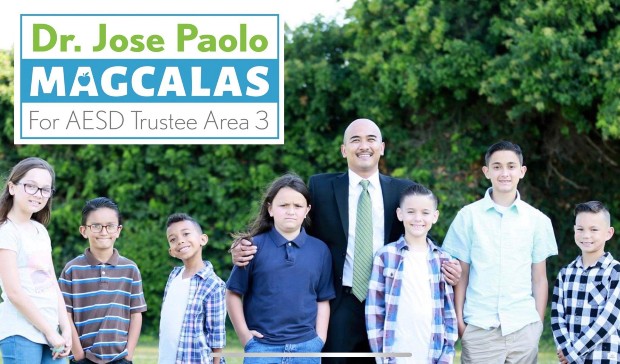 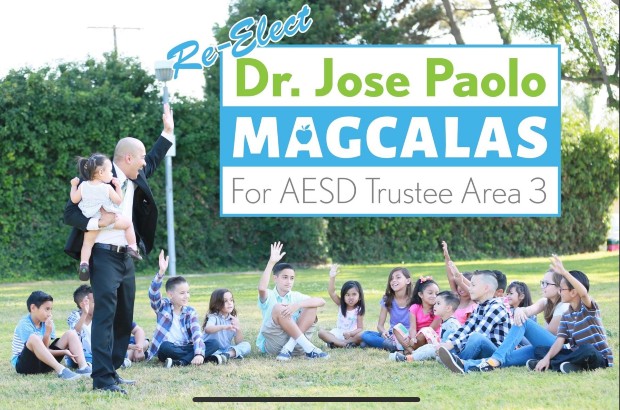 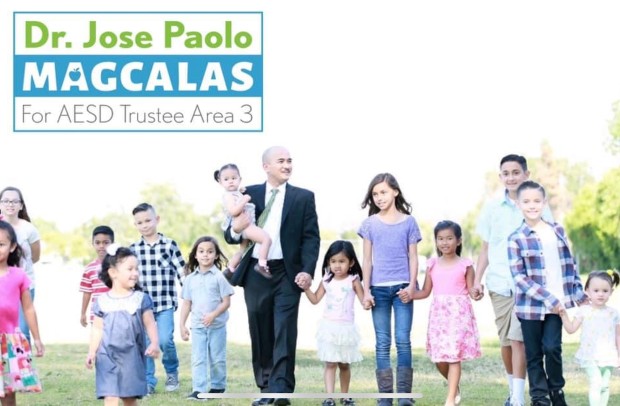 The moral of the story seems to be that when pandemic protocols collide with Magcalas’ political priorities – protesting against the police or securing another term on the AESD Board – politics carries the day.

Magcalas is facing his first ever election opponent this year: Anaheim Councilwoman Lucille Kring. Kring presents Area 3 voters with a genuine alternative to Magcalas’ pro-union radicalism. She supports charter schools and expanding school choice, and elevates the interests of students and families above the interests of the teachers union. While Magcalas was suing the Palm Lane Elementary parents, Kring championed them and is a member of the Board of Directors of the Palm Lane Charter School.  Her focus will be on providing AESD students with a quality education and preparing them for success in high school, rather than forming them into little Social Justice Warriors. Kring will provide a welcome voice for school choice, better outcomes and parental rights on a school board characterized by woke groupthink.