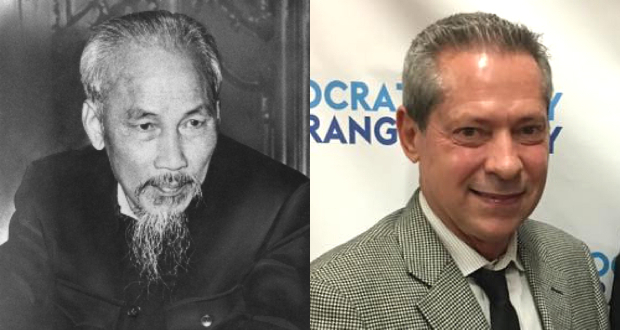 Jeff LeTourneau, a long-time progressive Democrat activist, resigned all leadership posts in the Democratic Party of Orange County tonight after a heated marathon meeting of the DPOC executive committee, over a Facebook post this week in which he praised the late Vietnamese Communist dictator Ho Chi Minh.

LeTourneau was the DPOC Vice Chair for North Orange County. Prior to the start of the DPOC executive committee meeting, he was stripped of his posts as co-chair of the bylaws and resolutions committees. As the meeting progressed and it became clear he and his supporters lacked the votes to stop his removal from being forwarded to the full Central Committee, LeTourneau agreed to resigned his vice chairmanship.

Here is LeTourneau’s post lauding communist dictator Ho Chi Minh as a “liberator” and praising him for defeating the “imperialist” United States (the country of which LeTourneau is a citizen): 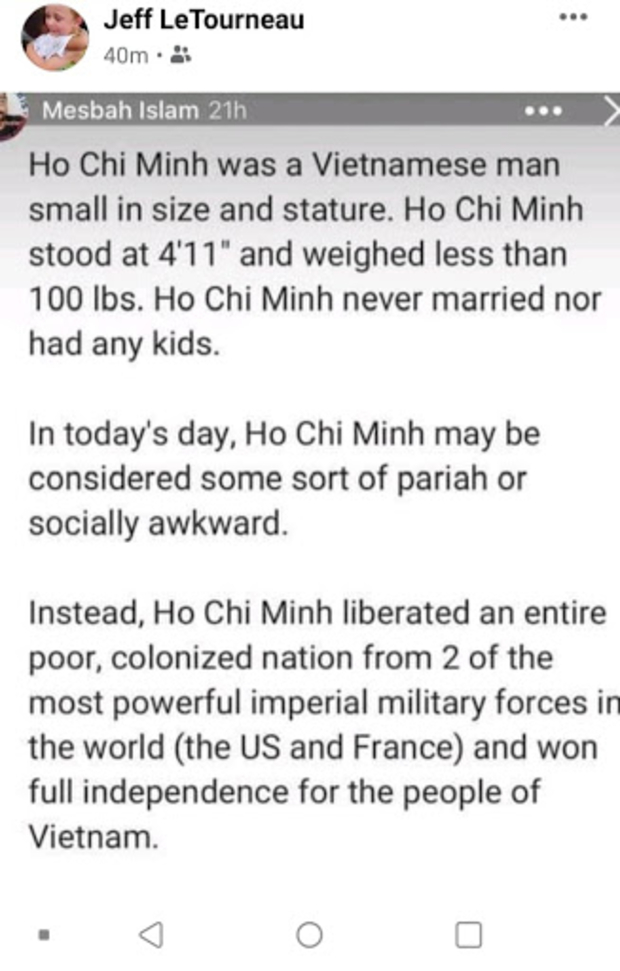 LeTourneau was condemned across the spectrum, especially among Orange County’s large Vietnamese community. That criticism bridged party lines. The Republican and Democrat nominees in the 72nd Assembly District race – both of whom came to America as Vietnamese refugees – called for LeTourneau’s sacking.

For a leader of the Democratic Party to praise communist Ho and label America’s military as imperialist is both highly offensive and historically wrong.

The Democrat candidate, Garden Grove Councilwoman Deidre Nguyen sent a letter to the DPOC calling for his removal:

“I am appalled at Mr. Jeff LeTourneau’s ignorance of the legacy of evil Ho Chi Minh carried out against the Vietnamese people. Holding him out as an example of someone to emulate is an inexcusable insult to the vibrant and staunchly anti-communist Vietnamese-American community here in Orange County.

“My father fought alongside U.S. servicemen against the communists in Vietnam. When Saigon fell, he was imprisoned for eight long years of hard labor. My Mom and I were both jailed for attempting to flee the communist regime. She was sent ot prison for three years. I was locked in isolation for two months. I was 7-years old.”

Some members of the progressive-Left wing of the county party rallied to LeTourneau’s defense. Victor Valladares, who was ousted as DPOC Vice Chair earlier this year due to inattention to his duties, online outbursts against the DPOC and his ongoing legal problems, posted a rambling defense of LeTourneau that failed to convince even his friends. OC progressive activist Mirvette Judeh posted a “nothing to see here, let’s move along” rationalization that was “liked” by Anaheim Councilman Jose F. Moreno:

UPDATE: the morning of September 3, the DPOC issued a press release on LeTourneau’s resignation (emphasis in red added):

Democratic Party of Orange County North Vice Chair Jeff LeTourneau announced today he has decided to step down from leadership in the Democratic Party. LeTourneau’s decision is in response to a Facebook post he shared on August 30th that called communist dictator Ho Chi Minh a “liberator.”

In the letter, Mr. LeTourneau stated,

It is my hope that Democrats across Orange County can unite behind our candidates and the values of the Democratic Party. We support working families, affordable housing, access to healthcare, and opportunity for all. We must support these values not only in the lead up to the upcoming election, but for years to come.”

Onlty in the “past few days” has LeTourneau figured out Ho Chi Minh was a murderous tyrant?