A long time ago, in a political culture far, far away, progressives opposed segregation, especially in public schools. They believed the law should be color-blind and the government should not discriminate or treat individuals differently due to their race or ethnicity.

Now, you have “social justice educators” – infused with the ideas of Paolo Freire, Critical Pedagogy and Critical Race Theory – actually advocating for the establishment of return to racially-segregated schools. 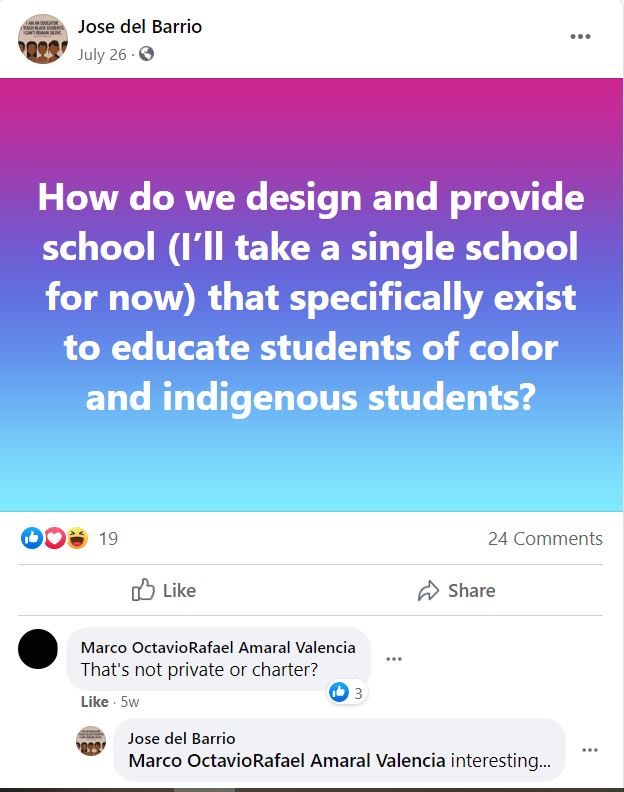 Lara’s idea is obviously problematic, for a number of reasons.

For one thing, it involves racial discrimination. Establishing a school that exclusively serves “students of color” and “indigenous students” by by definition requires excluding all other students on the basis of their race and ethnicity.

It is contrary to one of the this nation’s founding principles: equality before the law.  A school such as Lara envisions is predicated on treating students differently on the basis of their skin color or ancestry. More than that, the underlying idea is that segregating children on the basis of race and ethnicity is a good thing.  This is “separate but equal,” Plessy v. Ferguson territory.

Unfortunately, Lara is not a rarity in the world of public education. A growing number of teachers and administrators see themselves as  “social justice educators” who believe they have a duty to inculcate students with “social justice principles” (i.e. woke political views). That strikes most people as inappropriate, intrusive and contrary to what this country is about, it is taken for granted in the woke educational circles that increasingly influence curriculum. They don’t see themselves as radicals.

Take, for example the positive reaction of Juan G. Alvarez – another AUHSD teacher and a member of the Anaheim Elementary School District (AESD) Board of Education. Alvarez thinks it’s a great idea:

It ought to be disturbing and newsworthy that a school board trustee equates racially-segregated schools with “justice” and advocating for them as courageous and compassionate.  But don’t expect to the Voice of OC to report on this.

Alvarez and Lara aren’t outliers. One of the commenters on this post if Marco Amaral, a high school teacher in Chula Vista and member of the South Bay Union District Board of Education. Amaral is a Marxist who has stated publicly he “believes in the process of decolonizing and revolutionizing our schools, from elementary to high schools.” He put it even more succinctly on his school trustee Facebook page last month: 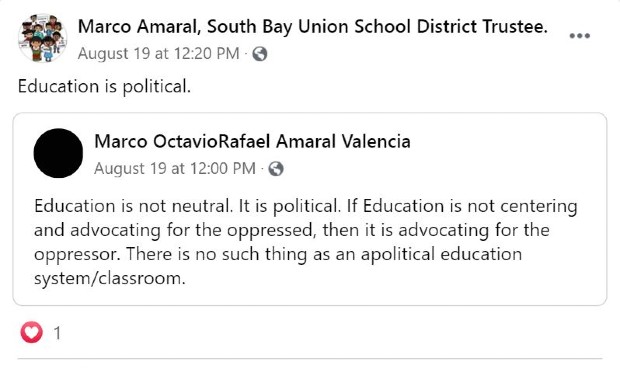 Amaral would fit right in on the AESD Board of Education. 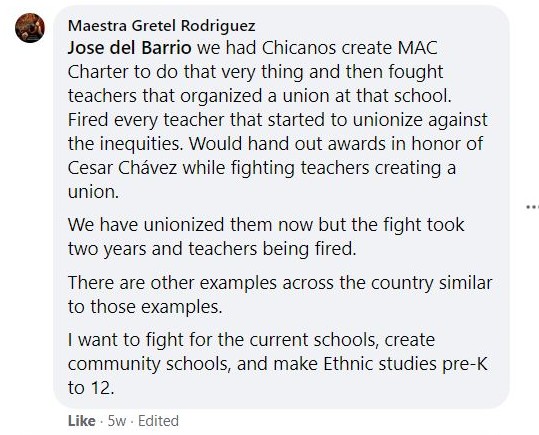 Rodriguez is former officer in her teachers union and past chair of its political action committee. She’s about as woke as it gets – here she hectors white colleagues to be good “allies” and fall in line behind her and other “BIPOC” leaders by lecturing them to “Remember many of you and your ancestors created this system we now have to change”:

BIPOC leaders are not the whole system. Don’t hold them accountable for all of it on one vote! If you are an ally trust BIPOC lead and organize! Remember many of you and your ancestors created this system we now have to change. Count all those votes compared to their one vote! https://t.co/LfOHvIiy5A

This isn’t Lara’s first excursion into indoctrinating the young. When he worked for the LAUSD, he ran an after-school center where he taught students to esteem bloody-minded Communist revolutionaries like Ho Chi Minh and Che Guevara.

What makes all this even stranger is that woke educators like these pay ritual homage to Sylvia Mendez, the name plaintiff in the landmark 1947 Mendez V. Westminster decision – which paved the way for the Brown v. Board of Education decision seven years later that ruled de jure racial segregation of schools to be unconstitutional.

Sylvia Mendez and her fellow plaintiffs and their families are rightly esteemed for fighting racial discrimination and the segregation of schools based on a child’s surname or skin color or heritage.  Those families sued to put an end to “Mexican schools.” Now, we have the weird spectacle of woke educators who praise the Mendez decision while pining to re-create the kind of schools that decision struck down. Talk about cognitive dissonance.

Parents send their children to school expecting they’ll receive a quality education that will enable to them to succeed and prosper in life, and to become productive members of society as they engage in the “pursuit of happiness.”  They don’t send them to school so that “social justice educators” who turn the principles of equality before the law and color-blind government inside-out, while using tax dollars to make students believe they’re victims who live in a rotten, racist country.

Then again, what parents want isn’t a priority for these “social justice educators.”