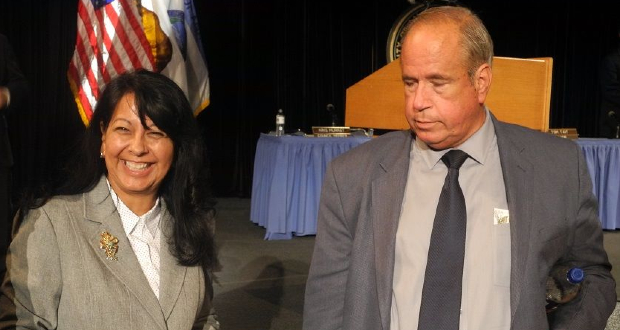 Mark Richard Daniels, one of District 1 Councilmember Denise Barnes’ most vocal political supporters and her appointee to the Cultural & Heritage Commission, has been caught on video making sexually demeaning comments about a female West Anaheim community improvement activist.

Daniels is a regular speaker during public comments at council meetings, and an active member of the Anaheim Democrat Club.

On September 22, 2020, the Anaheim Police Department conducted a sting operation law enforcement operation at corner of Beach Boulevard and Ball Road. According to the APD:

“APD investigators and SWAT team served two search warrants at illegal casinos, also known as a ”slap house” on the streets. These locations are often hotbeds of additional violent crimes and raise money for criminal organizations. At one of the locations, we made 8 felony arrest, 2 additional arrests for felony warrants, 47 misdemeanor arrests and seized 3 handguns and over $62,000.

R. Joshua Collins, a homelessness activist who roams Orange County videoing police interactions with the homeless, arrived to record the scene. Collins is opposed to enforcing ordinances designed to prevent the homeless from living in parks and other public spaces.

Below is an excerpt of the portion of Collins’ video in which Daniels attacks Ms. Mosley:

This afternoon, Collins changed the viewing settings on the video to private. However, a downloaded copy was made available to the Anaheim Independent.

While he videos, Collins is joined by Daniels, who commences a running commentary. At the beginning of this excerpt, Daniels begins disparaging Jodie Mosley, a West Anaheim resident who has been active for years in pressing for city action to clean-up and revitalize distressed areas in her part of the city. Collins giggles as Daniels denigrates Mosley, including a claim that former Mayor Tom Tait told Mosley the best thing about not being mayor was he no longer had to talk to her.

At the :22 mark in the video, Collins swivels to record Mosely, who is across the street speaking with the police. Daniels continues deprecating Mosley to Collins, who laughs at his comments.

At the 1:33 mark, Daniels can be heard saying about Mosley:

“She’s probably blowing every one of those cops.”

The Anaheim Independent contacted Mosley, a lifetime Anaheim resident who is active in the West Anaheim Neighborhood Development Council.

Mosley said she lives very close to the shopping center where the APD raid took place, and drove over to see what was going on, and to talk to the police officers on the scene and thank them for efforts.

“I wanted to thank the police for what they were doing,” said Mosley. “What was happening there was very dangerous for our neighborhood. It ws not only gambling, but guns and drugs.”

Earlier today, Anaheim resident Kathy Chance sent an e-mail to members of the Anaheim City Council demanding Daniels be immediately removed from the Cultural & Heritage Commission.  Chance praised Mosley for her activism on behalf of West Anaheim neighborhoods, excoriated Daniels’ sexist remarks and called on Barnes to remove him:

“We demand Mark Richard Daniels to be removed immediately from his Denise Barnes’ appointment to the Anaheim Cultural Commission,” wrote Chance.

Mosley told the AI she has reached out to Councilmember Barnes via text and e-mail about Daniels’ sexually demeaning attack. As of this evening, Mosley has received no response from Barnes.

“I’m really disappointed that Denise Barnes hasn’t bothered to respond to me about the her commissioner’s gross and appalling comments,” said Mosley.

The AI has reached out to Daniels, Barnes and Collins with questions regarding Daniels’ sexually demeaning attack on Ms. Mosley.  None of them have responded to our requests.  Since being contacted by AI for comment, Daniels have changed the settings on his Facebook page so it is no longer viewable by the general public.

Barnes is running for re-election to a second term this November.

UPDATED:  Shortly after this article was published, R. Joshua Collins removed the video from his Facebook page. He has still not responded to Anaheim Independent requests for comment.