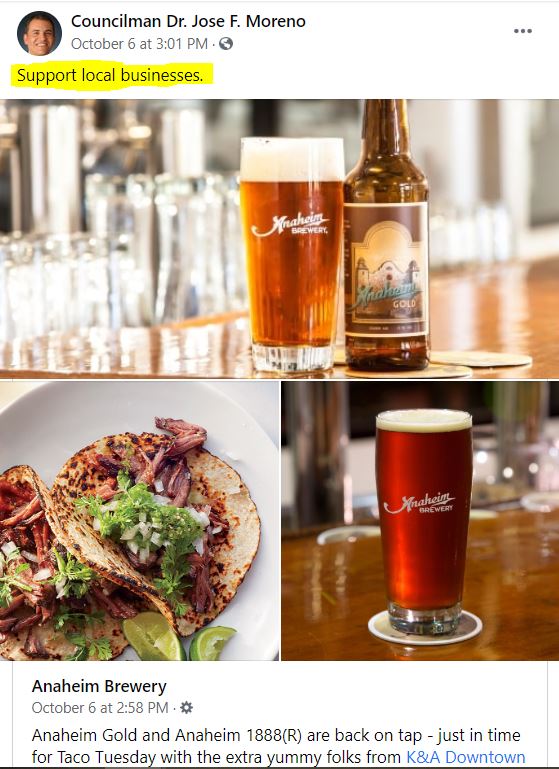 A few hours later, Moreno was arguing in favor of Proposition 15 – a ballot initiative that would hurt small businesses like Anaheim Brewery by dramatically raising commercial property taxes.

Liberal special interests – particularly the government employee unions – despise Prop. 13 and have called for its repeal since its passage, because it limits their ability to transfer wealth from our pockets into the government’s.

According to the non-partisan Legislative Analyst’s Office, passage of Prop. 15 would raise commercial property taxes by $10 to $12 billion per year.  That is an enormous hit.

Moreno glossed over the severe impacts of Prop. 15 during his presentation – which was equal parts disingenuous and uninformed.

Moreno made the case that a token reduction in the state tax on business equipment – amounting to a few hundred million dollars – somehow offsets a multi-billion tax increase.

He claimed – with a straight face – that carving up Prop. 13 actually preserves it.  That’s Orwellian.

Councilman Moreno also repeated the claim that small businesses are somehow exempt from Prop. 15, saying it “only” affects properties worth more than $3 million and it “won’t impact small businesses.”

This is simply untrue.

For one thing, when it comes to commercial property prices, $3 million isn’t as big a number as Councilman Moreno seems to think. Furthermore, the $3 million figure is aggregate. For example, say a partner with a 5% ownership stake in a $1,000,000 property also have ownership stakes in other properties who assessed values collectively exceeds $3 million, than that $1 million property will be reassessed at current market rate. In other words, the “$3 million exclusion” is smoke-and-mirrors.

Furthermore, most small businesses are tenants, not property owners.  They rent their space on what is called a “triple net lease” under property owners pass along property taxes, insurance, and maintenance costs directly to the tenants.

If Prop. 15 passes, small businesses the Olive Tree Restaurant in Little Arabia, or the owner of a Michoacan ice cream franchise will begin paying higher rents as landlords pass along the increase in their property tax.  Rent is a fixed cost. Small business owners will have to compensate for higher rents by reducing costs elsewhere – laying-off employees or reducing their hours – or raising prices, moving to a less expensive (and perhaps less desirable) location. And none of that may do the trick and these small business owners will have to close up and shelve their dreams because politicians like Councilman Moreno want more money for government.

Councilman Moreno has seen the devastation impact of how this will play out in the case of the Rancho La Paz mobile home park. When that property was sold, it was reassessed at market value and the property taxes skyrocketed, resulting dramatic rent increases for the tenants. Granted, Rancho La Paz is residential property, but the principle is the same.

Prop. 15 could well spur the “gentrification” that Moreno loathes so much, and reduce housing stock. Local government’s will have a hughe financial incentive to attract and approve commercial projects that displace residences, since the former will be re-assessed at market value every three years.

Moreno doesn’t appeear to have though the matter through, apparently too mesmerized by the tax dollar signs dancing before his eyes. Again and again in his presentation, Councilman Moreno talked how much money government gets from Proposition 15. No surprise there. Moreno has never met a tax increase he doesn’t like. Businesses all across Anaheim and the country are struggling to stay in business. Unemployment is staggering. California already had a terrible business climate pre-pandemic. And Moreno’s priority is to shift billions from the productive private sector into government coffers.

What good is sharing a local business’ Facebook post when Moreno wants to make it more expensive for that business to operate? Hypocrisy or ignorance? Both?

According to a study by the California State Conference of the NAACP and Berkeley Research Group, Prop. 15 will disproportionately harm woman- and minority-owned businesses the most. Another study concludes passage of Prop. 15 will lead to the loss of 120,000 private sector jobs.

Does Moreno have a plan to replace those?

Councilman Moreno and his fellow Prop. 15 proponents are putting government profit over people.