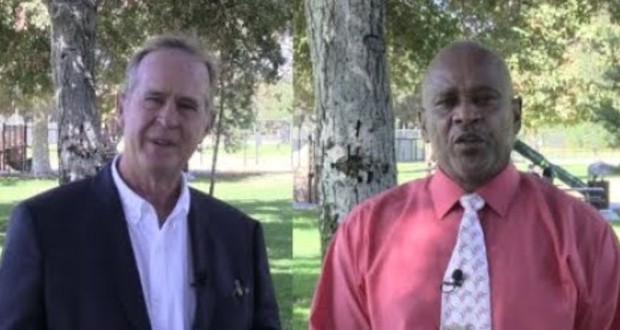 Anaheim Independent reported last week how District 4 council candidate Annemarie Randle-Trejo has been blowing off laws governing disclosure of her campaign donors.
She isn’t the only one.
Over in District 5, Ken Batiste has been having trouble complying with campaign finance disclosure law. The period during which candidates are required to disclose contributions of more than $1,000 within 24 hours (known as a Form 497) began on August 5. For some reason, Batiste finds it impossible to comply with this requirement.
Batiste received a $2,000 contribution from Jason Young on August 17. The law required him to report it within 24 hours, but failed to do so until 5 weeks later.
On September 24, Batiste took a $2,000 contribution from Fullerton real estate developer Tony Bushala, but blew off filing the Form 497 report within the required 24 hours. Batiste waited a full month to disclose the campaign contribution, folding it into his larger Form 460 report covering the period September 20 to October 17.
On October 17, Batiste accepted a $1,500 from former Mayor Tom Tait, but didn’t report it until a week later.
In fact, on only one occasion has Batiste complied with the 24-hour reporting requirement: when would-be performing arts center developer Howard Knohl donated $1,000.
Batiste, like other Anaheim council gadflies and critics, ceaselessly prattle about transparency and attack the integrity of members of the council majority – while failing to hold themselves to the same standards.
Batiste’s repeated violations of campaign disclosure requirements come on top of his campaign’s proclivity for mixing charitable food donations with electioneering.
Selective Gadfly Outrage Over Campaign Contributions
Daniel Robbins is the son of left-wing council gadflies Mike and Jeannine Robbins, the latter of whom is running for city council from District 4.  She is part of the “Anaheim for the People” slate along with Batiste and District 1 Councilmember Denise Barnes.
Daniel Robbins has also been reviewing campaign finance reports, and posted what he views as a “gotcha!” regarding donations from developer Camphor Partners to the campaigns of District 5 Councilman Steve Faessel and District 4 candidate Avelino Valencia: 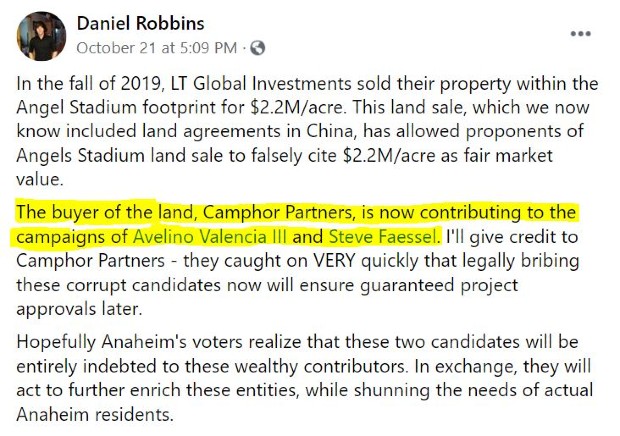 Like the rest of the Jose Moreno crew, young Robbins paints a developer contribution as “legal bribery.”
So, how does Daniel Robbins explain the fact Camphor Partners also made a maximum campaign contribution of $2,100 to Denise Barnes – whose re-election Robbins and his fellow progressive activists strongly support?:

Robbins doesn’t explain it. In fact, he completely ignores the Camphor Partners maximum donation to Barnes – presumably because it undermines his hysterical claim of “legal bribery.” After all, it would cut against Robbins’ ongoing narrative to accuses Barnes of being a “corrupt candidate” engaged in “legal bribery.”
These people give doubel standards a bad name.
district 5 Kenneth Batiste 2020-10-26
Matthew Cunningham