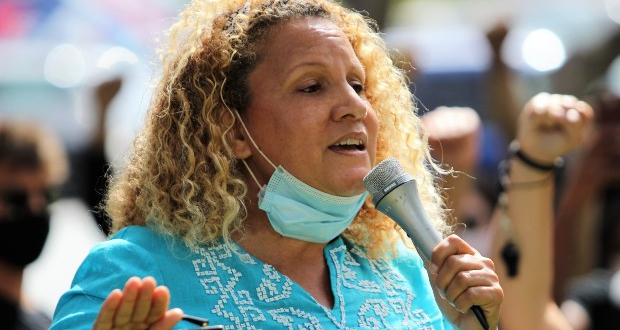 Annemarie Randle-Trejo is running for Anaheim City Council in District 4. She works part-time for the Anaheim Elementary School District and sits on the Anaheim Union High School District Board of Education.  She’s also adamantly in favor of Proposition 15, which would enact the largest property tax increase in state history.

If passed, Prop. 15 would remove those protections for commercial property and impose a $12 billion annual tax increase on the California economy.  And Randle-Trejo thinks that’s a good idea, and she’s angry the city council majority voted for a resolution opposing Prop. 15: 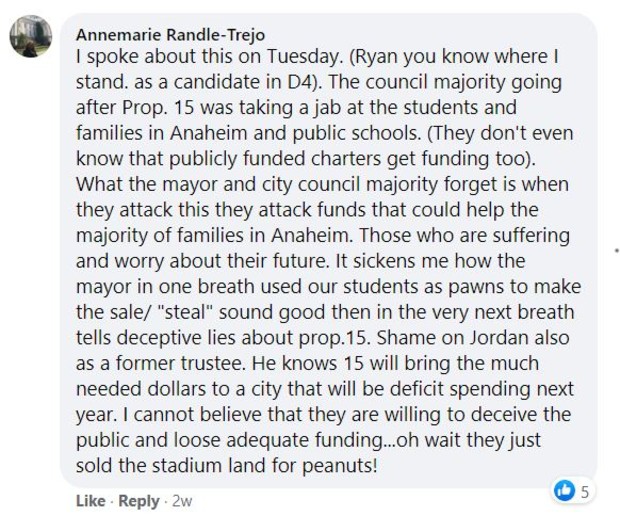 What comes through loud and clear is when it comes to Pro. 15, all Randle-Trejo sees is more money for state and local government.  She’s blind to the severe damage such a gargantuan tax increase and continuously escalating commercial property tax increases will inflict on our economy – and particularly on small businesses, the livelihoods they support and customers they serve.

Progressive like Randle-Trejo often talk about supporting small businesses as the backbone of the community – but when it’s a choice between standing with those businesses or shoveling more tax dollars into the government, they’ll choose government every time.

Randle-Trejo repairs to the political nostrums being propounded by the Prop. 15 campaign – falsities that OC Taxpayers Association Chair Carolyn Cavecche ably demolishes in this column published Sunday in the OC Register:

With a dozen propositions on our ballot the disinformation campaigns can be confusing. The spin from the proponents of Proposition 15 has been the worst I have seen in a long while.

Let me be very clear. There is no loophole that Proposition 15 needs to close, and this is not about our children or their education.

Proposition 15 is about trying to pass the largest property tax increase in California history and begin to tear apart historic Proposition 13 protections on everyone, homeowners, renters and businesses.

All properties are taxed in the same manner whether commercial of residential based on our state constitution, not Prop. 13. And it was the state legislature in Sacramento that defined when a change of ownership occurred for reassessment purposes, not Prop.13.

If the state legislature wanted to change the rules they could.  But they won’t. They have been saving this “loophole” political spin for just this moment.

Proposition 15 would raise property taxes on fundamentally every commercial property in California.  And while this was a really terrible idea last year, it will now destroy any hope of a return to a robust economy in California, and that means more job losses.

If Proposition 15 passes it will not just impact large corporations. The claim that most of the revenue will be provided by just a few large corporate properties is a red herring. Most small businesses rent their space and have what is known as a “triple net lease” which means they are responsible for paying any increase to the property tax bill.

Think about every business in your neighborhood. Your favorite restaurant, your grocery store, where you get your hair cut, the vet who takes care of your pet, your nail salon, your gym, your child’s day care center, your grandparent’s senior residential care home, the movie theater you used to be able to go to…every local business will have their property tax or rent bill raised.

Which means you will be paying more at the register.

What is even worse is using our children as a reason to pass this $11.5 billion tax increase.  Prop. 15 places schools at the lowest priority for receiving any new revenue.  It’s no surprise to learn that Sacramento bureaucrats get first shot at the new money stream.

Next, counties will need to take their cut just to try and implement the new assessment process.  County assessors up and down the state are opposed to Proposition 15 because of the costs and difficulties in trying to implement this badly written initiative.

After local government and special districts take the next chunk, schools will end up with less than 30 percent of any revenue.

There is also no guarantee that a dollar will see the inside of a classroom. Nothing is written in Proposition 15 that states how these new tax dollars need to be spent.

You can read the rest of Cavecche’s column here.

Progressives like Randle-Trejo forget the government sector depends for its funding upon the productive, private sector.  Policies like Prop. 15 that damage the economy, reduce jobs, force businesses to raise prices or close down, or even leave the state – such policies dampen economic vitality and ultimately government revenues.

A massive $12 billion increase in commercial property taxes will translate onto higher rents for small businesses, which will have to compensate by raising prices, reducing labor costs, or both.  Immigrant entrepreneurs who worked and saved to open their own shop or storefront will be faced with significantly higher operating costs. Those still hoping to open their own business will find their dreams postponed due to higher operating costs.

One would like to think support for Prop. 15 from progressives politicians like Randle-Trejos, Anaheim Councilman Jose F. Moreno, AUSHD Trustee Al Jabbar, AESD Trustees Ryan Ruelas, J. Paolo Magcalas and Juan Alvarez – one would like to think it stems from ignorance of the harm the initiative would inflict on people for whom they purport to fight.

But the more likely explanation is they know, and do not care. Or at least, their desire to appropriate more of the people’s money for government, outweigh’s any concern for the people themselves.