Election Day is here at last. While most eyes are focused on the presidential election, there’s a lot at stake in Anaheim, with elections in three council districts that will decide whether the current council majority retains control or if District 3 Councilman Jose F. Moreno controls the dais for the last two years of his term.

One measure of which outcome appears more likely is the increased shrillness from Moreno and his political followers – led by Moreno himself.

The left-wing academic has been blasting Mayor Harry Sidhu as “despotic” and complaining over the massive disparity in campaign resources between his endorsed candidates and their opponents. You see, in Morenoland, a ample warchest is only bad when it belongs to your opponent.

In 2014, when special interests from Los Angeles, San Francisco and Washington DC were pouring hundreds of thousands of dollars into the ballot measure to implement district elections and increase the city council from four to six, Moreno was very OK with it.

The District 3 councilman has also been assailing the integrity and humanity of District 5 Councilman Steve Faessel – who is one of the most decent and conscientious individuals you’ll ever meet. Moreno growsls that Faessel “has to go” and accuses him of being “indifferent” to the health of his constituents. Mind you, Councilman Moreno measures someone’s indifference by whether or not they support Moreno’s policy schemes; opposition to whatever idea Moreno is running up the flagpole will get you marked as being against “the people” and in the pocket of “corporate interests” – the latter being the people and organizations that actually invest, take risks, provide jobs and create opportunities for advancement.

Moreno – ever fixated on people’s race, sex and ethnicity – also sounded his alarm about the possibility the election may result in an all-male city council: 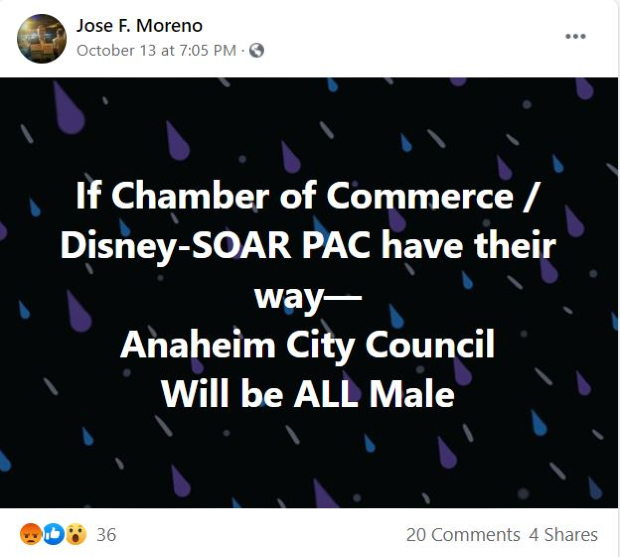 And in District 4, he has failed to endorse either of the two female Democrat candidates. If an all-male council is such a catastrophe, Moreno is doing to little to avert it. 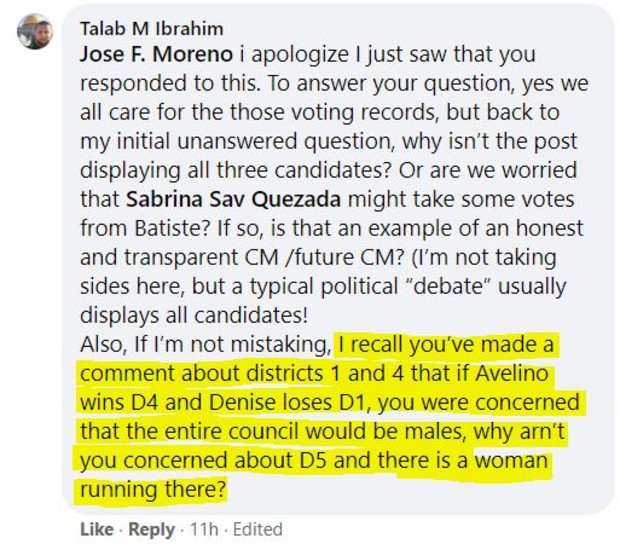 So far, crickets from Moreno.

Ryan Ruelas – AUSHD teacher, California Teachers Assocication officer and AESD Board of Education member – has also been railing on Facebook about how unfair it is that Councilman Faessel seems poised for re-election.

Ruelas could have put his money where his mouth is and challenged Faessel.  Ruelas isn’t up for re-election to the school board unitl 2022, so his school board seat wasn’t at ris.

But Ruelas shrank from doing so, leaving the Moreno clique to invest its hopes in Ken Batiste.

Batiste is earnest but a decidedly third-tier candidate who may well come in third behind Sabrina Quezada – whom the Moreno clique has been trashing on social media.