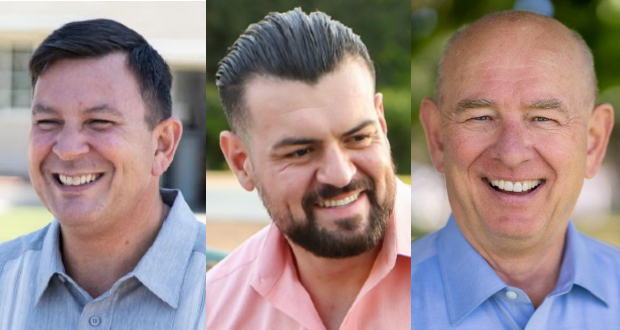 Council seats in Districts 1, 4 and 5 were on the ballot. In Districts 1 and 5, incumbents Denise Barnes and Steve Faessel, respectively, were seeking re-election to a second four-year term.  District 4 was open, as term limits prevented Councilmember Lucille Kring from running again.

This year, it was Councilwoman Denise Barnes. She is losing to Jose Diaz with 38% to Diaz’s 42%.

Barnes was recruited and narrowly elected in 2016 with the strong support of then-Mayor Tom Tait, winning 27.3% of the vote in a seven candidate field. She ran on promises of fixing parks that had become homeless encampments, investing in neighborhoods, improving quality of life in West Anaheim and opposing programs to increase tax revenues by incentivizing luxury hotel development in the Resort Area.

During her first two years in office, Barnes stuck closely to Tait, seldom spoke at council meetings – and when she did it was from prepared statements.

However, she seemed more interested in helping Moreno joust with the council majority than in delivering for her district. played little to no role in cleaning homeless encampments from places like Maxwell Park or in jump-starting the redevelopment of the “Sinkin’ Lincoln” site as the 39 Commons entertainment-retail-residential project as the spearhead of Beach Boulevard revitalization. She even played ther race card, accusing council colleagues of not supporting her initiatives because of her ethnicity (she’s Mexican-American).

Barnes drew two opponents: Ryan Balius, her appointee to the Anaheim Parks and Recreation Commission, and Jose Diaz, who works as water services manager for the City of Orange. Balius is a Republican and Diaz is registered as No Party Preference.

Barnes’ leftward drift put her in a sort of no man’s land.  Four years ago, she was the beneficiary of financial support from conservative multi-millionaire Howard Anahmanson, who funded significant independent expenditures supporting her campaign and attacking her opponents.  She also raised more than $10,000 in maximum contributions from Tait family members and associates.

This year there was no support from Ahmanson, who opposes left-wing policies such as rent control and “living wages” that Barnes subsequently embraced.  Although former Mayor Tait donated $1,500 to her campaign (the maximum is $2,100) and appeared in some YouTube videos, his support fell well short of 2016 levels. 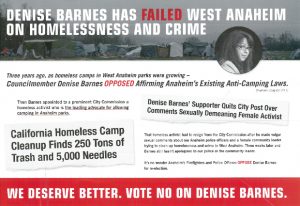 Diaz has an inspiring immigrant. He left his native Cuba in 1995 in a home-made rubber raft to escape the totalitarian Castro regime, making it to the U.S. via Guantanamo Bay.  Though he arrive poor, Diaz lifted himself up by dint of hard work and education, eventually rising to become manager of the City of Orange’s water services.  He has lived in West Anaheim for 20 years, where he and his wife are raising their four children.

Diaz is pro-free enterprise and economic growth, and believes local government should focus on its primary purpose of ensuring the safety and liberty of its citizens.

When the first results came in on election night, Barnes and Diaz were virtually tied, which turned into a 500-vote Diaz lead by the final election night report. Diaz’ lead widened to 609 votes after yesterday’s updated report. 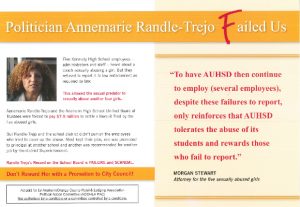 Valencia’s opponents were Anaheim Union High School District trustee Annemarie Randle-Trejo and council gadfly Jeannine Robbins. Both of whom are left-wing Democrats allied with Councilman Jose F. Moreno – who unofficially supported both of them. Moreno’s supporters split between them while viciously attacking Valencia on social media.

Neither Robbins nor Randle-Trejo were able to raise campaign funds sufficient to support the adequate voter communication.  Valencia proved an able fundraiser and ran a positive campaign.

Like Barnes, both Robbins and Randle-Trejo are inveterate critics of the businesses and organizations that create jobs, generate tax revenue and work to foster robust economic opportunity and activity in Anaheim, favoring a heavy-handed tax-and-regulate approach. Not surprisingly, the targets of their hostility opposed Robbins and Randle-Trejo, and funded mailers highlighting the latter’s record as a school board trustee.

Valencia flattened both Robbins and Randle-Trejo, garnering more votes than all his opponents combined:

District 5: Faessel Re-Elected  By Large Margin
Life-long Anaheim resident, retired businessman and local historian Steve Faessel was elected in 2016 bringing an unequaled depth and degree of civic experience and commitment to his community. He has conducted himself with care, attention to constituent needs and a spirit of compromise.

Faessel had also become the target for growing invective from Councilman Jose F. Moreno and his political followers. For months, Moreno has openly called for Faessel’s defeat, and enthusiastically threw his support to one of Faessel’s opponents, left-wing Democrat and council gadfly Kenneth Batiste.

homelessness, and investing in neighborhoods.

Batiste ran a quirky, unfocused campaign marked by incidents of mixing charitable activity with electioneering.  The other candidate, 25-year Sabrina “Sav” Quezada campaigned on the esoteric issue of a city-funded Universal Basic Income.

In 2016, Faessel garnered 42.7% of the vote. This election, he increased that share to more than 54% – a significant majority that will likely increase as the vote tabulation progresses.

When November arrived, more than 54% of District 5 voters remembered….to re-elect Councilman Faessel to a second term.