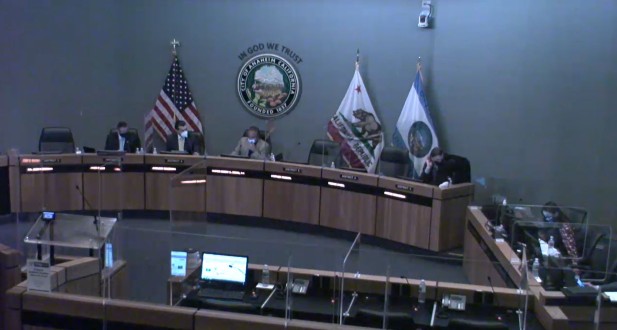 Last week, the city council took steps to limit the impact of new residential developments on parking by increasing the minimum parking space requirement for new homes with four or more bedrooms.

Prior to the council’s vote, the city required that homes with four or more bedrooms must have at least four spaces: two in the garage and two in the driveway and/or street.  Under the amended code approved by the city council, minimum parking requirements increase progressively: 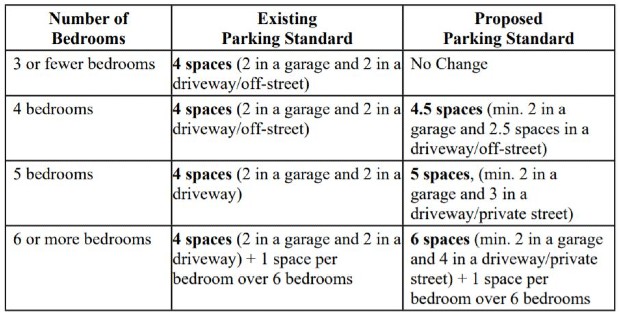 Since the the parking space requirements are contingent o the number of bedrooms, the council also voted to amend the zoning code’s definition of a bedroom, ensuring rooms that can be used as bedrooms are included in the count.

Since Anaheim is built out, current and future residential development in the city will consist of in-fill projects. Parking is already a challenge in the flatlands, as homeowners contend with residents of older, underparked apartment complexes for scarce street parking. The goal of minimum parking requirements is to mitigate the impact of new development on existing – and limited – street parking inventory.

The council first dealt with the matter at its January 12, 2021 meeting, where it originally included a recommendation to cap tandem parking at 20% of the parking spaces in any new development. Anaheim has never capped tandem parking, which is basically an extra-long parking space (in a garage or on a parking pad) that can fit two vehicles. At the behest of Councilmembers Trevor O’Neil and Avelino Valencia, the tandem parking cap was removed.

Tandem parking is one tool in the developer tool box, but not a popular one. It’s inconvenient in comparison with traditional parking solutions. Developers are responsive to consumer preferences, and largely eschew tandem parking, as Planning Director Ted White informed the council last month. Imposing an arbitrary tandem parking cap would be unnecessary and counter-productive.

Councilman Steve Faessel unsuccessfully requested re-consideration of the tandem parking cap. Councilman O’Neil replied it was no longer part of the zoning code amendment, but pointed out the council can always further examine the matter without holding up the updated parking requirement. When Councilman Jose F. Moreno made a motion to “re-instate” the tandem parking cap, O’Neil noted – not for the first time that evening – there was nothing to “re-instate” as Anaheim had never had such a cap.  Moreno’s motion failed, and the increased parking requirements were approved.

Some building industry voices weren’t thrilled about the increased minimum parking requirements, either. Californians for Homeownership, a lobbying arm of the California Realtors Association, sent a letter to the council objecting it would “lessen the intensity” of development – i.e. hamper increasing density in existing neighborhoods. The letter also threatened litigation if the parking requirements were adopted. Californians for Homeownership is the state’s leading advocate for increasing density in existing single family neighborhoods by stripping local governments of the power to approve or deny the construction of Accessory Dwelling Units (ADU) on existing lots – and without regard to their impact on street parking..