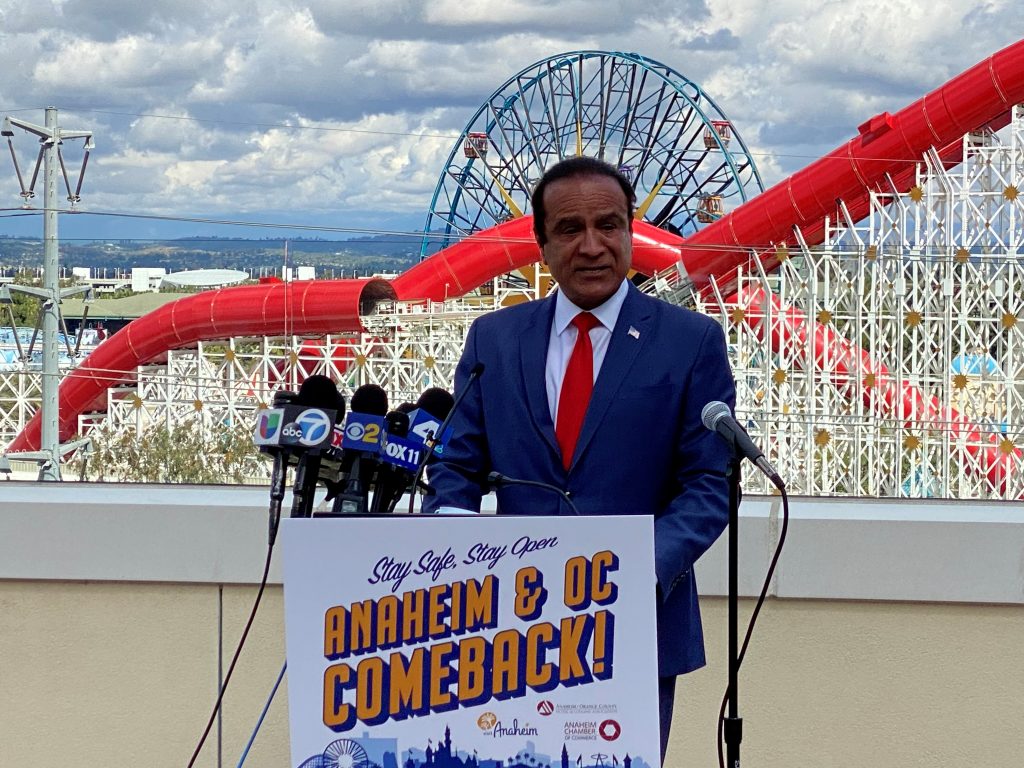 Orange County and Anaheim leaders representing business, labor and local government  held a press conference on March 11 to support Newsom Administration actions to accelerated re-opening of the Disneyland Resort and Angel Stadium, while warning that the Governor’s failure to issue meeting guidelines for convention centers and hotels undermines efforts to revive the Anaheim Resort economy and the jobs and businesses it supports.

The press conference was held at the Westin Anaheim, which was completed last year but remains closed due to the absence of re-opening guidelines from the state.

Anaheim Mayor Harry Sidhu and Councilman Avelino Valencia (whose district includes the Disneyland Resort and the Anaheim Convention Center), as well as hotel owners and employees, small business owners and union representatives addressed the devastation causes by the shut down, the hope generated by the impending re-opening of Disneyland and the urgency of obtaining similar re-opening guidelines for conventions and business meetings.

“We now have a path forward for the Disneyland Resort and Angels Baseball,” said Mayor Sidhu. “Today, I’m proudly declaring the Anaheim comeback.”

“There is still more work to do in Anaheim,” the mayor continued. He noted the rapid pace of vaccinations – Anaheim is home to two vaccination super PODS – and stated that overcoming COVID and economic re-opening can move in tandem.

“We can fight coronavirus while working on economic recovery,” declared Sidhu.

“It’s true what they say: we never really know what you have until it’s gone,” said Councilman Valencia. “The theme parks, Convention Center, hotels, and other businesses of the Anaheim Resort are the life of our city.” 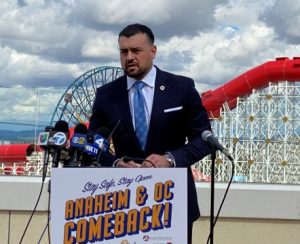 The pandemic shutdown has had a uniquely devastating impact on Anaheim’s economy, thanks in large part to the Newsom Administration’s mystifying foot-dragging on issuing workable re-opening guidelines on theme park re-opening.

“We are ready and prepared to begin safely holding events at the Convention Center when the time is right.” 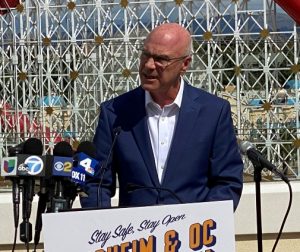 Jay Burress, CEO of Visit Anaheim, described how the huge economic cost to Anaheim, noting the 1st and 2nd quarters of this year are a total loss for the Convention Center due to the absence of convention guidelines. – the loss of more than $900 million in economic impact.

“This week we received the cancellation of a 3rd Quarter 2021 citywide convention, worth $35. 3 million in economic impact, that must move to another state due to no guidelines in California,” continued Burress, noting that another five large conventions, totaling more than $144 million in economic impact, are poised to cancel due to lack of guidelines.

Ernesto Medrano, representing the LA/OC Building Trades Council, which represents many of the tradesman who worked on the construction of the approximately  remarked on the reality working safely during the pandemic. 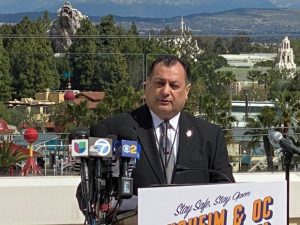 “All the trades have rapidly adapted and learned how to work with safety and health measures implemented in the anticipation of this reopening and us working on this hotel is a prime example of those safety measures,” said Medrano. “We’ve been doing it for months and added measures to protect the health and safety of our members and the general public.”

“We’re confident than the safety measures have been already implemented, and we’re ready to get back to work,” Medrano continued.