Disneyland Resort To Re-Open on April 30 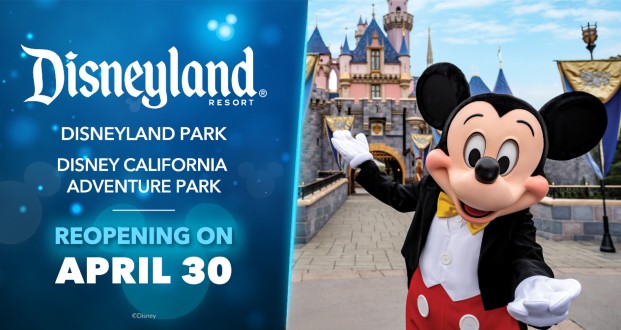 The Disneyland Resort will re-open on April 30, it was announced yesterday by Resort President Bob Chapek. Disneyland and Disney’s California Adventure closed on March 14 of last year as part of the statewide shutdown ordered by Governor Gavin Newsom as part of his strategy to combat the spread of COVID-19.

In the case of Anaheim, Newsom’s strategy was successful in putting more than 30,000 Disney cast members out of work, destroying hundreds of small businesses, boosting local joblessness to Great Recession levels, shuttering dozens of hotels and blowing a $100 million hole in the City of Anaheim’s budget.

The re-opening comes in the wake of the Newsom Administration’s re-jiggering of the theme park re-opening guidelines it issued in December – which were roundly criticized at the time as flawed and divorced from the reality that theme parks operators such as Disney are capable of safely operating during the pandemic.

Governor Newsom has been the target of a recall campaign fueled by dissatisfaction with his handling of the pandemic. The recall is expected to qualify and go before the voters this Fall.

Under re-formulated theme park guidelines announced earlier this month, the Disneyland Resort could re-open with limited capacity as early as April 1.  However, after being closed for more than a year, Disney cannot simply flip a switch and welcome guests to the park.

Thousands of laid off cast members have to be recalled. Many cast members had to find new employment and may choose not the return. Whether they are returning veterans or new hires, they have to be re-trained according to new operations protocols geared to the pandemic. And keep in mind that the Newsom Administration is complicating the matter by dragging its heels on issuing more detailed guidelines on what counts as safe operation of rides and guest traffic.  The state has decreed that all Disneyland Resort guests must be California residents and wear masks, cast members must be tested weekly and no indoor dining is allowed.

Disneyland Resort operations also depend up an extensive network of outside vendors – many of which went out of business during the state-government-imposed shutdown. That means Disney has to re-build its vendor network.

Disney’s other theme parks re-opened months ago, and have demonstrated the company’s expertise in safely operating a major theme park – contrary to lockdown advocates who predicted re-opened theme parks would function as super-spreaders. The reality has been opposite.

Re-opening the Disneyland Resort, even on a limited basis, is enormously good news for Anaheim Resort hotels and other businesses, many of which have closed their doors or are hanging by a thread. At least 29 Resort area hotels simply shut their doors pending a re-opening of the park.

Even so, the park’s re-opening is only a first step toward resorting vitality to Anaheim’s economic engine. Inexplicably, Governor Newsom has yet to issue guidelines for the conventions and meetings industry. Without guidelines, Anaheim Convention Center cannot re-open and hotel ballrooms and meeting rooms remain ideal because they cannot book weddings, banquets, business meetings.  This failure by the Newsom Administration has been costing Anaheim hundreds of millions of dollars in lost economic impact from canceled conventions, and more major conventions are poised to cancel if the state does not act soon.