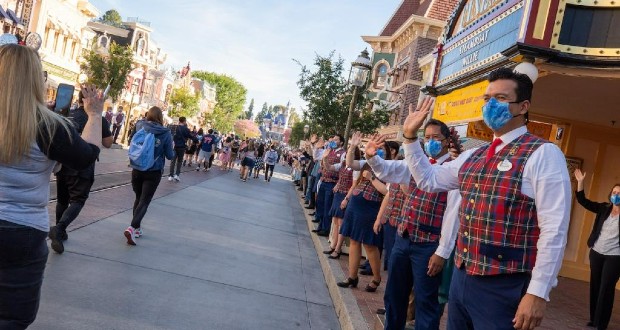 After being closed for an unprecedented 14-months due to shutdown order by Governor Gavin Newsom, the Disneyland Resort admitted its first guests in more than a year on April 30 – heralding the return of the Happiest Place on Earth and the economic engine of Anaheim.

According to the Newsom Administration’s ever-changing re-opening guidelines, the Disneyland Resort is allowed to operate at 25% capacity (since Orange County is in the Orange Tier).  Once OC moves into the less restrictive yellow tier, the capacity limit increases to 35%. While, the Newsom administration initially limited theme park admission to California residents within a certain geographical radius of the park they are visiting, that rule has been liberalized to include fully-vaccinated out-of-staters. Nonetheless, Disney is limited admittance to California residents for the time being.

Most attractions in Disneyland and Disney California Adventure are open, albeit under COVID-19 protocols such as mandatory masking, social distancing and outdoor queues. A few, such as Great Moments with Mr. Lincoln, the Submarine Ride and the Monorail remain closed.

Park hours are circumscribed compared to pre-pandemic hours, with the park closing at 7 p.m. compared to the customary midnight during the warmer months.

Fans began lining up in the early hours of the morning, eager for their first taste of the Disneyland experience after more than a year.  Although ride-management features such as the FastPass aren’t available, their absence is compensated by reduced park attendance.  For regular Disneyland guests, the relatively sparseness of guests will be a jarring but welcome contrast to the pre-pandemic crowds that are certain to re-appear at some point.

The re-opening is especially good news to Anaheim Resort hotels and other businesses that depend on the dollars that accompany Disneyland guests. Many local hotels simply shut their doors at some point during the seemingly endless COVID-19 pandemic shut down as the Newsom Administration dithered about issuing rational re-opening guidelines that businesses could use as a basis to plan resuming operations and recalling employees.

Rather than exhausting reserves and lines of credit during endless months of state government-authored uncertainty, Resort businesses can now anticipate a progressive uptick in bookings and customers. This is welcome news for hotels and businesses that weathered the pandemic shutdown, but comes too late for many businesses that could not survive the prolonged shutdown.

The re-opening is also welcome news for City of Anaheim municipal finances. The Resort generates half of the city’s general fund revenues – funding community services for neighborhoods across Anaheim. The Governor’s decision to shut down theme parks for more than a year blew a $100 million hole in the city’s budget, threw tens of thousands of local employees out of work and permanently destroyed hundreds of Anaheim business.  Recovery was delayed and complicated by constantly shifting state re-opening guidelines, compounded by the Newsom Administration’s failure to issue rational re-opening rules for theme parks.

The shut down led to the layoff or furloughing of nearly of most of the Disneyland Resort’s 32,000 cast members.  The park has brought about 15,000 cast members back to work, and will recall or re-hire more as the re-opening proceeds.

Occupancy at Resort area hotels and motels is rising, enabling those enterprises to bring their employees back to work. Restaurants and retail stores that rely upon park visitors are beginning to see an uptick in business. And the city will begin seeing a restoration of tax sorely needed tax revenues.

Disneyland President Ken Potrock waxed enthusiastic about the symbolic, as well as concrete, importance of the re-opening.

“The importance of this to the people in this state and really the people throughout the country became much more than just getting a business open,” Potrock told the OC Register. “It became really symbolic of bringing hope back to so many.”

“Today is day one of what we are calling our ‘legendary comeback,’” said Potrock in the OC Register. “The ability to bring back guests is the start of that financial recovery. As we begin to add more capacity, as we get more frequency, as we add back a membership program, all of those things are layers along the journey. We’re incredibly optimistic about what our comeback is going to look like and that it’s going to be a rapid one.”