Al Jabbar, Anaheim Union High School District Board of Education member and deputy chief of staff to 4th District Supervisor Doug Chaffee, has been posting up a storm on social media lately, lambasting Israel for defending itself from rocket attacks by Hamas, the terrorist group that run the Gaza, a self-governing Palestinian territory.

Jabbar is also a close political ally of Councilman Jose F. Moreno, and is expected to run for Anaheim City Council to succeed Moreno in 2022, with the radical academic’s support.

For the last several days, Hamas and Islamic Jihad have indiscriminately fired thousands of rockets into the Jewish State. Both are clients of the radical regime in Iran, which supplies them with the rockets and the expertise to assemble and fire them.

Israel is defending itself with airstrikes against Hamas military targets, and going to lengths to avoid civilian casualties. This is difficult because Hamas mingles its rocket batteries among the civilian population, in hopes of they will function as human shields. Hamas knows this tactic guarantees death for innocents, which they use for propaganda purposes to inflame opinion against Israel – which is acting in self-defense. 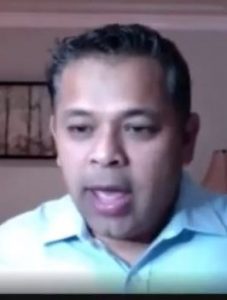 Here in the US, the woke Left has excused or ignored Hamas’ aggression and focused its rage against Israel, complete with accusations of genocide, apartheid and “settler colonialism.”  Those charges are bogus (and for the facts about the “evictions” Hamas is using as a rationale for its attacks on Israeli civilians, read this article).

Jabbar’s posts reveal a deep-seated hostility to the Jewish State and disturbing moral blindness toward Hamas terrorism.  He approvingly shares Al Jazeera videos of “The Squad” spinning false narratives. For example, Rep. Ayanna Pressley projecting her BLM ideology onto the conflict, and comparing Israeli air strikes against Hamas targets with “police brutality” against the violent protests of last summer. Or Rep. Alexandria Ocasio-Cortez positing the false and hysterical premise that by defending itself against mass rocket attacks, Israel is endangering Palestinians “right to survive.”

At no time does Jabbar condemn Hamas aggression, note that it was Hamas that initiated and sustains this conflict, or even admit that Hamas is a terrorist organization and proxy of the Iranian regime.

Taking Jabbar to task is Jack Einwechter – a retired Army officer and husband of former Rep. Loretta Sanchez. In comment exchanges on Jabbar’s anti-Israel posts, Einwechter succinctly and forcefully confronts Jabbar. Rather than responding, Jabbar just calls Einwechter a troll. Even radical Rep. Rashida Tlaib jumps in. The Squad member also ignores Einwechter’s points and attempts to cancel him with baseless accusations of being a racist Islamophobe who hates Palestinians. 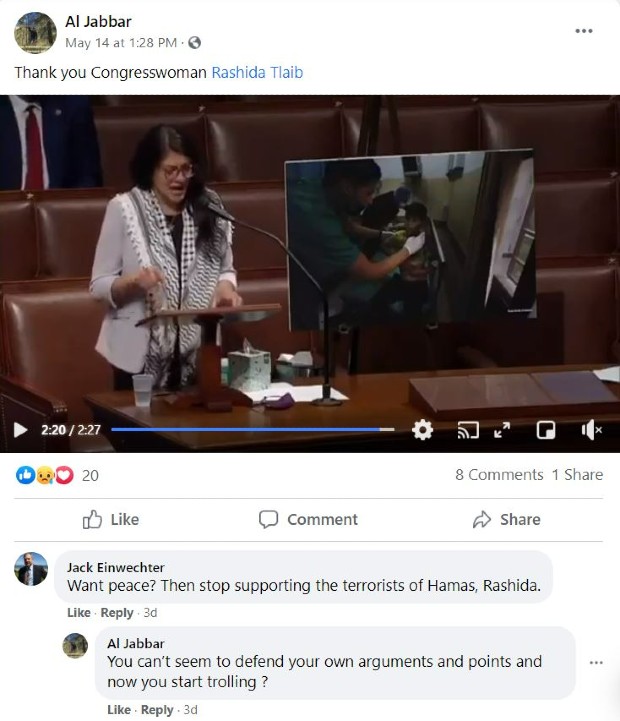 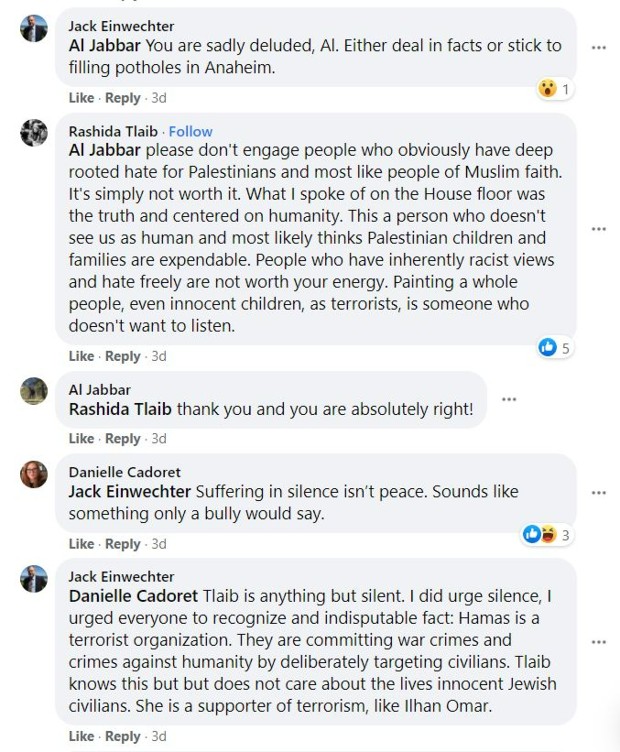 Tlaib is stridently anti-Israel and a staunch supporter of the BDS movement – whose ultimate goal is the end of the Jewish State. Last year she re-tweeted “From the River to the Sea, Palestine Will Be Free” – a rallying cry used by anti-Israel terrorists since the PLO. For example, Hamas leader Khaled Meshaal invoked during a 2012 rally in which he called for continued conflict in order to “liberate” (i.e. destroy) the State of Israel.

Rashida Tlaib RT’s out the same message that got Marc Lamont Hill canned from CNN.

From the River to the Sea, Palestine will be Free – code for eradicating the State of Israel and its millions of Jews.

Reminder – this is a sitting U.S. Congresswoman pic.twitter.com/zEWOptrGPW

For all her vitriol, Rep. Tlaib has a weak grasp of Palestine history and the formation of the State of Israel.

Einwechter also called out Jabbar on sharing a video of Rep. Cori Bush trying to link the Israel-Hamas conflict with the shooting of Michael Brown in Ferguson, Missouri.  Jabbar responds by calling Einwechter a troll, ignoring his arguments and refusing to answer a yes-or-no question about whether he thinks Hamas is a terrorist organization. 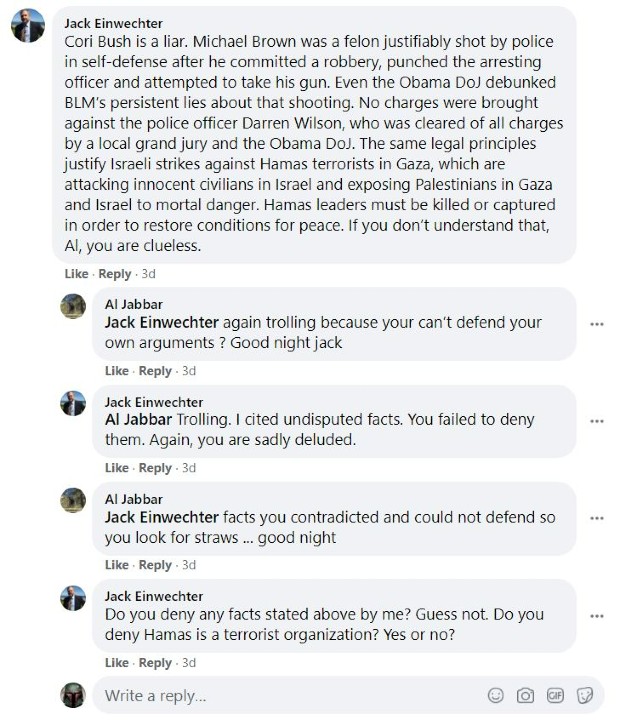 Israel is a democracy and ally, defending itself against military aggression from two terrorist organizations that reject peaceful accommodations and seek to destroy Israel and gain power for themselves.  Al Jabbar is silent about the aggressors but criticizes the victim of the aggression. As woke leftists like to say, “Silence is complicity.”

After being pummeled for 10 days by Israel, now Hamas wants a ceasefire. Of course they do – they want to preserve the political gains and prevent the further destruction of their military capabilities by Israel. And Al Jabbar supports that.

Anti-Israel sentiment (which increasingly crosses over into anti-Semitism) is endemic on the Woke Left, as is support for terrorist groups like Hamas, and their goals.  Jabbar is definitely a man of the Woke Left, and his current and past social media posts are in line with that moral blindness.