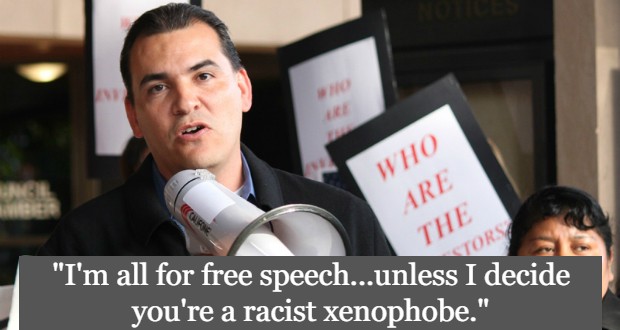 As we reported earlier, Councilman Jose F. Moreno was the primary mover behind the successful anti-free speech effort to force a controversial conservative political rally out of Anaheim.

In an e-mail this Saturday weekend to Mayor Harry Sidhu, City Manager Jim Vanderpool and Planning Director Ted White, Moreno demanded that “at minimum,” the city must also issue a “strong and determinative statement” that these type of xenopobic, racist, anti-Semitic, misogybnist events that seek to undermine our democracy by promiting the Big Lie are not welcomed in [Anaheim].” 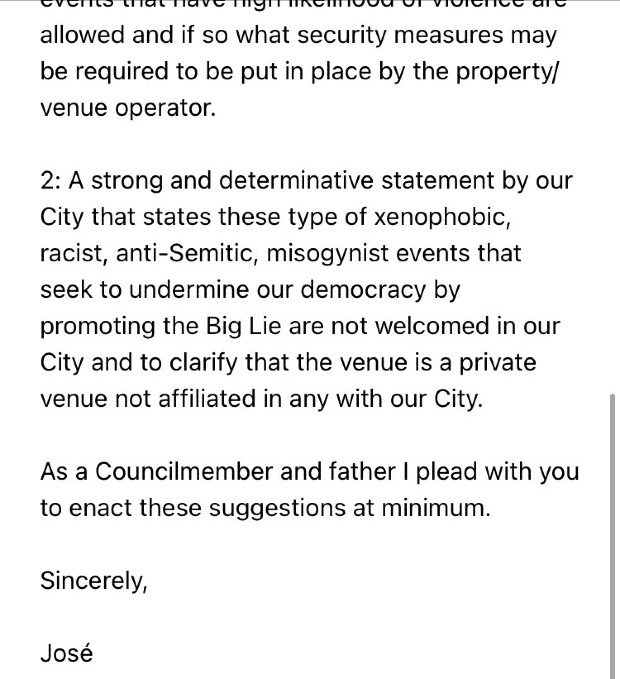 Councilman Moreno needs to brush up on the 1st Amendment, because this startling and paranoid statement clearly belies his claim to be a “supporter and advocate of free speech.”

In the mind of Moreno, terms like racist and xenophobic apply to anyone who doesn’t buy into his left-wing political views. If you think we should account for all public assistance recevied when determining a green-card holder’s dependence on public assistance, that makes you a “racist.” If you think citizenship is more than mere residency and that illegal immigration should be stopped, then you’re a “xenophobe.”  And on and on.

Woke Left believers like Moreno view the Republican Party, for example, as a vehicle for racism, xenophobia and all manner of bigotry.  What he is demanding is an official statement by the city labeling tens of thousands of Anaheim residents as racists and xenophobes.

When Democrat politicans and activists – many of them local – spent the last few years promoting the Trump-Russia Collusion hoax, did Moreno demand the city issue a “determinative statement” declaring those folks unwelcome in Anaheim?

Or was that an acceptable Big Lie?

As John F. Kennedy said at the Berlin Wall, “freedom is indivisible.” Free speech is for all Americans – especially when we disagree with it or find the views being expressed reprehensible.  Politicians like Councilman Moreno shouldn’t decide who deserves it and who doesn’t, or who can say what, where, in Anaheim – or anywhere else.

We live in a political culture where the meaning of words like “racist” and xenophobe” are twisted and stretched until they lose meaning, and are weaponized as tools for silencing others. Moreno himself has engaged in that sort of behavior on the council dais. Proposals like his only serve to chill free and fearless debate.

Moreno’s demand is hysterical, radical and anti-free speech. Let’s hope he has cooled off and refrains from making this embarrassing and intolerant request.