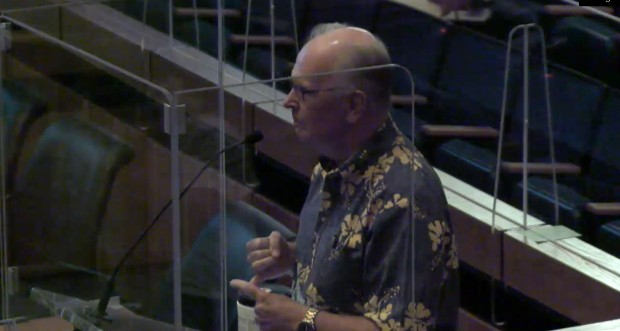 Former city commissioner and long-time political activist Larry Larsen’s claim that Councilman Steve Faessel sent the police to his house – in an attempt to silence a critic – isn’t supported by the facts. His false allegations became a banner headline in the Voice of OC: “Booted Anaheim Commissioner Claims Councilman Faessel Sent Police to His Home.”

Subsequent investigation reveals Mr. Larsen’s allegation is untrue, and key facts and context are missing from the Voice of OC‘s article.

Speaking during public comments at the July 13 council meeting, Larsen claimed, “July 2, between eight-thirty and nine o’clock at night, two Anaheim police officers knocked on my front door. They were there at the behest of Mr. Faessel.”

“Mr. Faessel, you sent them to my door without cause,” alleged Larsen, further claiming the officers were sent to investigate whether he was planning a “terrorist diversion or distraction on the July 4th parade” – although he tucked in a prefatory admission that the police made no reference to “terrorist” acts.

The Anaheim Independent looked into the matter. We spoke to Councilman Faessel and others with first hand knowledge of the incidents in question. While two Anaheim police officers did visit him on the evening of July 2, Larsen’s other claims are false.

For example, Larsen’s central claim – that Faessel sent the police to his home.

Context is in order here.

In April of this year, the City Council voted 7-0 to remove Larsen from the Anaheim Sister City Commission due to remarks he made during consideration of sister city status with Pudong, China – especially his use of the phrase “China virus” while blaming China for the COVID-19 pandemic’s devastating impact on Anaheim.

Larsen stood by his remarks and complained his public removal harmed his reputation. While he is understandably bitter, Larsen is now constructing a false narrative with the assistance of the Voice of OC.

Fast forward to July 1 and the chain of events that are missing from Larsen’s July 13 comments and the Voice of OC‘s account of his allegations.

On July 1, Supervisor Don Wagner organized a media event to celebrate the siting of an Orange County veterans cemetery in Gypsum Canyon in east Anaheim. Anaheim Councilmembers Steve Faessel and Trevor O’Neil were among the public officials and dignitaries invited to attend.

Faessel and his wife Susan arrived at the event. As soon as they got out of their car, Larsen – obviously still fuming over the matter – marched over to Faessel, yelling, “Do you think I’m a racist! Do you think I’m a racist!” and “You’re the racist! You’re the f—ing racist!” Larsen launched into a tirade, inches from Faessel’s face. According to an eyewitness, Larsen’s hands were clenched down at his sides, and he was shaking with anger.

After about a minute, Faessel calmly told Larsen this was not the place to have this discussion.

But Larsen continued his tirade.

Faessel said he again told Larsen this was not the place to have this conversation, and side-stepped him to make his way to the seating area. Larsen shouted after him, “I’ll see you on the 4th! I’ll see you on the 4th!” – referring to the Anaheim Hills 4th of July parade in which Councilman Faessel would be riding.

Councilman Trevor O’Neil was also nearby, so Larsen marched over to him and gave him the same treatment. Like Faessel, O’Neil chose to disengage and make his way to the event.

That might have been the end of it, but three hours later, Larsen sent a bitter, angry e-mail to Faessel and O’Neil, in which he raged against both councilmembers, calling them “worms,” “cowards,” and “bottom feeders” and re-stating his intention to renew the confrontation at the 4th of July parade: 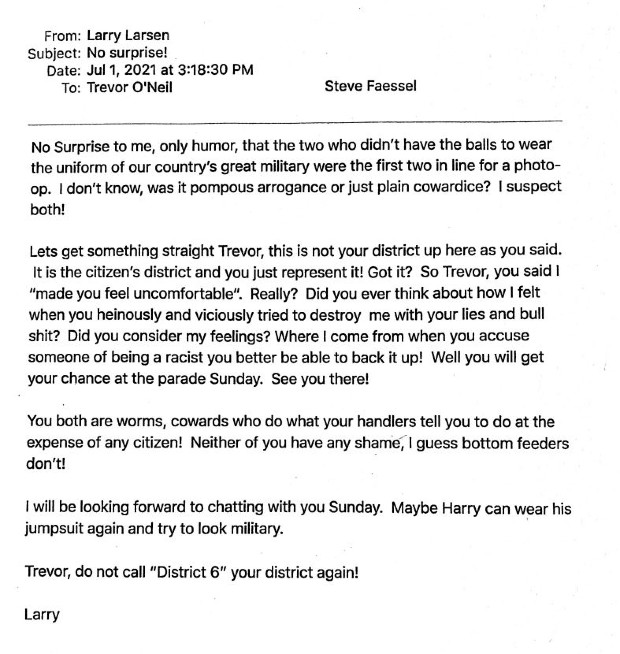 Larsen’s July 1 e-mail to Councilmembers Faessel and O’Neil, sent shortly after aggressively confronting them at a public event.

To re-cap: twice on July 1, Larsen angrily indicated to both Faessel and O’Neil that he would continue the matter at the 4th of July celebration. Given that he had been nurturing a powerful grudge against Faessel and O’Neil for months. Both councilmembers were riding in the 4th of July parade, one could reasonably conclude Larsen might act out his deep anger by behaving disruptively at the parade – particularly after twice declaring that on the 4th of July he would pick up where he left off. After receiving Larsen’s e-mail, Faessel did what a reasonable person would do: give the parade organizers a heads up so they could be prepared for a possible disturbance.

What Councilman Faessel did not do is contact the Anaheim Police, nor did he ask the parade organizers to do so.

“I did not call police nor ask anyone to call on my behalf. I was contacted by officers just as Larry was and happily answered questions, as reflected in the police record,” said Faessel. “As always, Anaheim Police handled the matter professionally and carried out their duty with respect for all.”

Parade organizers, as a matter of routine, work with the Anaheim Police Department, and our of an abundance of caution notified the APD.

The next day, July 2, the police visited Councilman Faessel at his home to discuss the incident with Larsen. The officers said said they intended to visit Larsen regarding the matter, but Faessel asked them not to, thinking it unnecessary. When the police asked the councilman if he had heard from Larsen since the veterans cemetery incident, he showed them Larsen’s e-mail.

Later, the police informed Faessel they had discussed the matter with both their captain and the deputy chief, both of whom said the officers should visit Larsen to discuss the matter – and notwithstanding Faessel’s request to let it be.

As Larsen stated during the July 13 council meeting, the officers’ conducted the interview in an exemplary fashion. Two days later, the 4th of July parade and celebration went off without incident.

“As the event’s first time back since pandemic restrictions, I wanted to see the celebration go on without distraction from something that has nothing to do with gathering our community to honor our country,” Faessel said.

“I shared a reasonable concern in the best interest of seeing the event go off without incident, which I’m glad to say was the case,” said the District 5 councilman.

Would Larsen have created a disturbance at the event by confronting Faessel or O’Neil, yelling “Do you think I’m a racist!” as they rode in the parade? Was the absence of incident due to a sobering effect stemming from the officers’ visiting Larsen? It’s impossible to know for certain. But given Larsen’s toxic behavior – aggressively confronting and yelling at Faessel and O’Neil at public events, sending them deeply hostile e-mails and vowing to continue his confrontational behavior – it was responsible and prudent for Councilman Faessel to give the parade organizers the heads up, just as it was responsible and prudent for the parade organizers to inform the police. The APD – as well as parade organizers and the public – have an interest in maintaining public order at large events like the 4th of July celebration.

What is clear, after gathering the facts of the matter, is that Larry Larsen – regardless of how he feels about his ouster – is acting out his anger by making false accusations about Councilman Faessel. Gadflies can say what they like at the podium during Anaheim City Council meetings – William Fitzgerald being the most disreputable example.

Larsen is actively misleading the public by claiming Councilman Faessel sent the police to his home, in an attempt to silence a critic. The facts state otherwise.