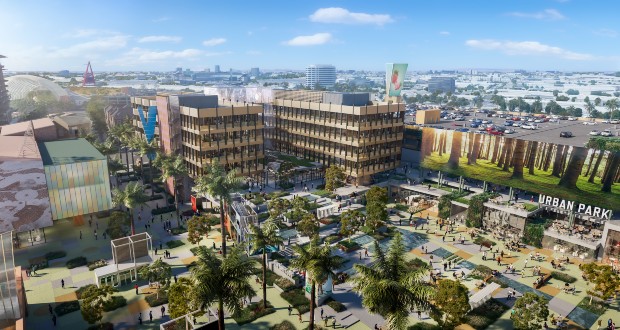 Rendering of OCV!be development proposed by the Anaheim Ducks

The State Auditor recently published a report claiming 12 cities – including Anaheim – are at “high risk” in terms of their municipal finances and economic future.

While the State Auditor merits respectful consideration, it’s difficult to credit the alarm vis-à-vis Anaheim. The Voice of OC presented the state’s finding uncritically, when even a cursory examination of the facts undermines the report’s conclusions.

The city revenues took a significant hit during the pandemic. Anaheim’s convention and tourism economy proved uniquely vulnerable to the pandemic: Governor Newsom’s draconian and ever-changing lockdown rules kept the Disneyland Resort and the Anaheim Convention Center shut for more than a year. That closure rippled across dependent Anaheim and regional businesses, and tax revenues plummeted.

But this was obviously a temporary crisis. The Disneyland Resort has re-opened, with progressively increasing capacity. Hotels are filling up. Trade shows and conventions have returned to the Convention Center (with some hiccups, such as Vidcon delaying its show from this October to spring 2022).

The Voice of OC story reported “according to the auditor’s website, Anaheim’s lack of general fund reserves and a slow, downward trend in the city’s tax revenue over the last few years could spell trouble down the road.”

Except that Anaheim’s tax revenues have been trending upward, not downward.  Indeed, TOT revenues have consistently outpaced projections. The auditor’s claim – repeated uncritically by the Voice of OC – is simply untrue.

The Resort bonds will pay off in a few years, freeing up an enormous tranche of currently restricted tax revenues.  Massive development plans by Disney in the Resort, and by the Ducks and the Angels in the Platinum, will generate hundreds of millions in additional tax revenues for years to come. Furthermore, ongoing residential construction in the Platinum Triangle that is unrelated to plans by the Angels and Ducks will also contribute additional tax revenues.

While City of Anaheim spokesman Mike Lyster pointed out as much in a statement, VOC Reporting Fellow Noah Biesiada tried to downplay those realities:

But the revenue generated per acre by the Platinum Triangle is not as high as smaller commercial areas throughout Orange County. In 2018, the area brought $5.1 million in tax revenue, down from $5.7 million in 2015.

By comparison, Downtown Fullerton, which is just about 65 acres, brought in $2.1 million in sales tax for Fullerton in 2018, while the 74-acre Outlets at Orange generated $3.1 million for Orange that year.

Biesiada is comparing apples with oranges. Downtown Fullerton isn’t going to change and the Outlets in Orange isn’t getting any bigger, while the Platinum Triangle is nowhere near being built out and achieving its revenue generating peak. Using those examples to brush off Anaheim’s future tax revenue earnings makes no sense.

The COVID-19 pandemic interrupted the upward trajectory of Anaheim’s economic growth and tax revenues. It was a huge interruption, but an interruption nonetheless.  The State Auditor didn’t take the foregoing factors into account, undermining the credibility of its report as it concerns Anaheim.

The COVID-19 lockdown was a black swan event that shouldn’t be considered determinative of Anaheim’s future city revenues or economic activity.