Only White People Can Be Racist, According To AUSHD “Talking About Race” Training For Teachers 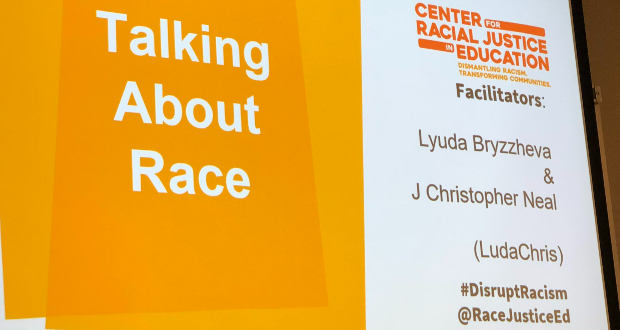 Only white people can be racist, according to the Talking About Race “anti-racism” training the Anaheim Union High School District is implementing at Katella and Cypress high schools. Other claims the workshop will attempt to drill into to teachers and administrators:

Teachers who disagree with these and others aspects of the Talking About Race (TAR) ideology are labeled “resisters.”

The overtly ideological nature of the Talking About Race workshop is made unintentionally clear by an October 2020 report  entitled “Building Teacher Capacity to Interrupt Racism in Schools: Studying the Work of the Center for Racial Justice in Education.” The report examines the Talking About Race training commissioned by the Center for Racial Justice in Education, which has been hired by the Anaheim Union High School District to implement its year-long “Racial Justice In Organizations” program at Katella and Cypress high schools. The program includes conducting a “Racial Equity Audit,” establishing “Racial Equity Leadership Councils” to police attitudes on campus, develop a Racial Equity Strategic Plan that may incorporate targeted racial outcomes in hiring and recruitment.

A major part of the contract calls for enrolling teachers and staff at Katella and Cypress high schools in one-day Talking About Race “racial justice” workshops.” The goal of these workshops is to make teachers see their jobs through the lens of anti-racist ideology and view each other as members of racial and ethnic groups. Layered over this is an ideology that upends the traditional understanding of racism, and substituting the claim that only white people are capable of racism. 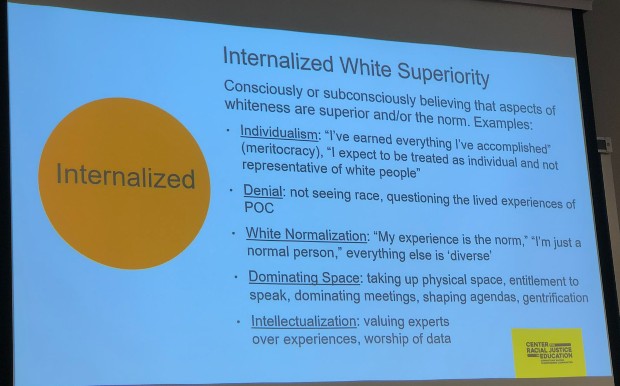 According to the study, Talking About Race aims to “build anti-racist educational practice” at the school site where the training is given, and train teachers to “develop tools to create anti-racist schools and classrooms.”

Again, it’s important to remember that “anti-racism” is a loaded ideological term. According to the anti-racist ideology on which this training is based, being non-racist is actually racist.

The report discusses how Talking About Race “increases awareness” of the history of racism: some “respondents said they gained a deeper understanding of racism in terms of power, white supremacy and white privilege. They reported learning that reverse racism and the notion that race is biologically based are both false.” 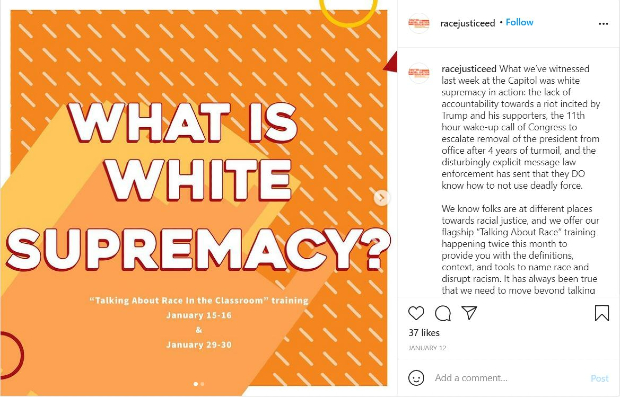 The CJRE defines white supremacy as “a historically and institutionally perpetuated system of ideas and beliefs that exploits continents and nations and oppresses People of Color” in order to “maintain and defend a racialize system of wealth, power and privilege.” CJRE training takes it for granted that American society and institutions – including the public education system – are shot through with systemic racism and white supremacy.

The study approvingly reports instances where TAR’s indoctrination succeeds, noting evidence of “changes in educator and administrator understandings of race and racism” and developing “a needed common language for discussing racism and its manifestation in schools.” Translation: TAR was effective in recruiting teachers and administrators into the  anti-racist ideology and adoption of its worldview and terminology.

For example, the report brags about trainees using “explanations of racism” derived from “the definition provided by the CJRE during training“:

“For example, a teacher from Spring Gardens explained, “Minorities, by definition, can’t be racist. There is no power component to it.” This understanding of racism reflects the definition shared by CJRE in the TAR training, which explicitly describes racism as the combination of racial prejudice and power.”

“Teachers and administrators also discussed the ubiquity of White supremacy culture, the harmful impacts of colorblindness, and the need for curriculum to reflect student identities.”

According to the report, the CRJE’s program explicitly advocates the belief that only white people can by racist, noting that teachers in the TAR workshops “struggled” with the “CJRE’s definition of racism, which asserts that racism is the combination of racial prejudice and power – meaning that only White people can be racist, because of the access to power afforded by white privilege.”

The vast majority of Americans reject that view, and yet the AUHSD is paying a radical woke advocacy group to try and indoctrinate Katella and Cypress teachers into putting these radical views in to practice in their classrooms.

One has to wonder if the members of the AUSHD Board of Education – which unanimously approved the counteract with the CJRE with little discussion – bothered to inform themselves about the Center for Racial Justice in Education, its radical agenda rooted in Critical Race Theory and the overtly political nature of their training programs.

Next: how the Center for Racial Justice in Education deals with “white resisters” among school faculty and staff.