Jabbar is a member of the Anaheim Union High School District (AUHSD) Board of Education and is running for the open District 3 council seat that is currently represented by his close friend and political ally Jose F. Moreno.

Generally speaking, invites to campaign fundraisers include the location of the event.  Jabbar’s invite cagily states the address will only be provided upon RSVP: 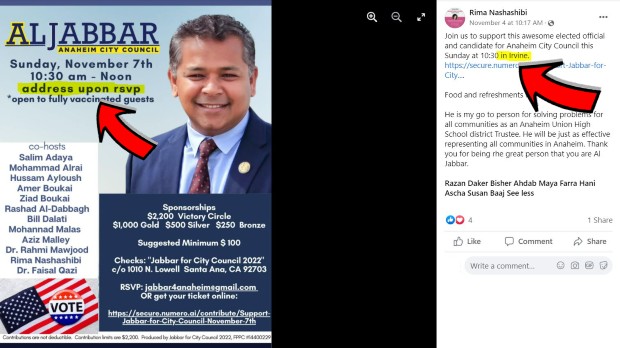 Judging from this video posted by Jabbar supporter Rashad Al-Dabbagh, it appears to have been held on a school site (in Irvine): 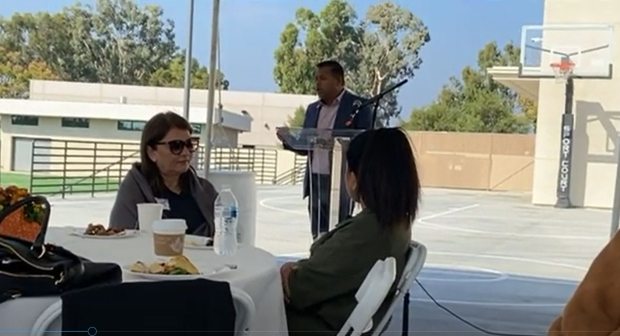 During the fundraiser, Jabbar says “a lot of people” told him not run because District 3 is a majority Latino seat.

Jabbar then joked, “Well, maybe you can run, but change your name. You can be ‘Alejandro Jabbar from Michoacan!” eliciting chuckles from the audience.

In this day and age, the woke Twitter mob would be all over any white Republican who cracked a joke like that. But for a left-wing radical-of-color, it’s OK.

Jabbar is already playing fast and loose with the facts, He falsely claimed Angel Stadium “was appraised at $700 million to $900 million.”  In fact, according to the city-commissioned appraisal – which is publicly available to Jabbar and everyone else on the city website – the highest appraised value for the stadium site was $500 million...if the entire 153-acre site was sold for non-stadium development.

Again, Jabbar has his facts wrong. Arte Moreno-controlled SRB Management is buying the stadium site for $320 million – at the high end of the appraised value of $300 to $320 million as a baseball stadium.

The Angels are paying the $320 million with $150 million in cash and $170 million in the form of affordable housing, parks, and other amenities requested by the city.

Other key elements of the agreement that Jabbar omits:

Then again, this is the same Al Jabbar who claims AUHSD students suffered no learning loss during a year-and-half of forced distance learning.

File this under “Dog Bites Man”: all five trustees of the Anaheim Elementary School District Board of Education have endorsed Jabbar’s council candidacy.

This is about as unexpected as the sun rising in the morning.  Four of the five trustees are current or former AUSHD teachers: Juan Alvarez, Ryan Ruelas, J. Paolo Magcalas and Mark Lopez.  Lopez, Alvarez and Ruelas are all teachers union operatives. All five are long-time political allies of Jabbar’s.