New Board Of Supervisors Map Divides Anaheim Among Three Districts

The Orange County Board of Supervisors concluded its decennial redistricting yesterday, approving a district map that divides Anaheim among three different supervisor seats.

Currently, the Anaheim flatlands are in the 4th Supervisor District, with Anaheim Hills in 3rd District.

The new map divides the city among the 3rd, 4th and 2nd Supervisor Districts: 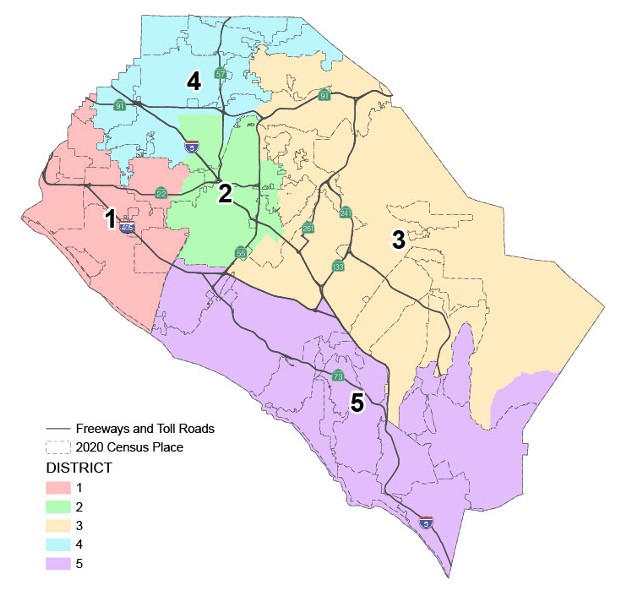 Anaheim Hills remains in the 3rd Supervisor District, currently represented by Supervisor Don Wagner, while the flatlands are divided between the 4th and 2nd Districts.

The 4th District, currently represented by Supervisor Doug Chaffee, takes in west Anaheim, the section of central Anaheim between La Palma Avenue and the Fullerton boundary, and the section of the city extending east of the 57 Freeway and north of the Orange border to the edges of Anaheim Hills.

The new 2nd District incorporates a section of central Anaheim south of La Palma Avenue and west of the 57 Freeway. The western boundary of this section runs up Disneyland Drive, hangs a right on Katella, jogs left up Harbor Boulevard to the 5 Freeway, where it travels north until taking a right up West Street to La Palma – carving the Resort District between the 2nd and 3rd District.

The 2nd Supervisor District is an open seat that will be on the 2022 ballot, and was drawn to be a Latino district: 54% of its Citizen Voting Age Population is Hispanic/Latino, as is 66% of its total population. In addition to Anaheim, it includes all of Santa, most of Orange, the bulk of Tustin, and small part of Garden Grove and unincorporated North Tustin. 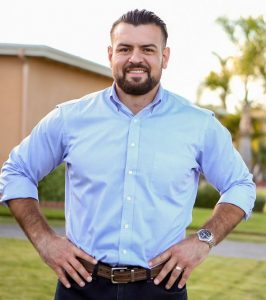 In other words, there is an abundance of potential candidates.  Santa Ana Mayor Vince Sarmiento, who passed on challenging Supervisor Andrew Do last year when Santa Ana was in District 1, is likely to run – as could any number of his six colleagues on the city council.

Anaheim Councilman Avelino Valencia lives in the 2nd District, and since he is not up for re-election until 2024, he would have the luxury of running without having to give up his council seat (what is known in political circles as a “free ride”).

Valencia’s council colleague, Jose F. Moreno, lives just over the line in District 4. Moreno is termed out and openly considering a primary challenge to either Democrat Rep. Lou Correa or Democrat Assemblyman Tom Daly – whom Moreno considers too centrist.

Daly would have been a likely and formidable contender for the 2nd Supervisor District, but he lives just on the other side of the Harbor Boulevard boundary line.  Daly, who will be termed out of the Assembly in 2024, began his political career as a board aide during the 1980s, and came very close to running for the Board of Supervisors in 2010. However, the progressive activist coalition behind the new map drew boundaries that put Daly in Supervisor Chaffee’s district.

Another likely candidate is Garden Grove Mayor Pro Tem Kim Nguyen, who was elected to the Garden Grove City Council in 2016 and re-elected last year.