Posted by: Matthew Cunningham in Government & Politics, OC Board of Education January 25, 2022 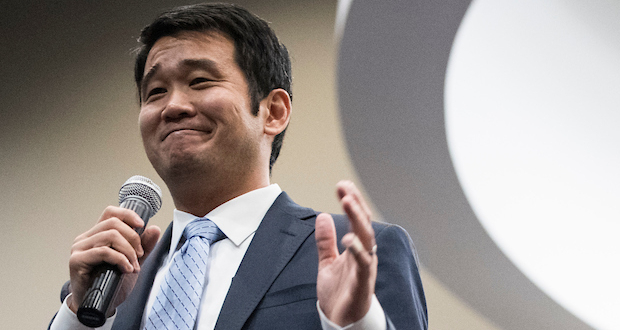 He is trying to do so over the objections of at least four of the five members of the OC Board of Education, who call his SB 286 a transparently political attempt to facilitate replacing the current board majority with members who will hew to teacher union opposition to charter schools.

“He has never once come and talked to us or communicated with us,” said OCBE member Tim Shaw. “Everything has been done to us and not with us. He is clearly after us.”

The Orange County Board of Education is the rare public school board not dominated by teacher union-friendly members. For the last several years, it has been controlled by a revolving majority whose members are supportive of charter schools and greater parental choice over where their children go to school. The OCBE has also opposed draconian pandemic lock-down measures that negatively impact learning as unnecessary overreach that does far more harm than good, and is unwarranted by the data – as well as racially divisive Critical Race Theory teachings that are seeping into K-12 curriculum.

“We’ve approved more charter schools than any other county [board of education] in the state,” says Lisa Sparks, who represents District 5 on the OCBE. “The voters have elected and re-elected this board majority because they believe in what we are doing for parental rights.”

The OCBE majority was also instrumental in helping parents in the Anaheim Union High School District transfer their children to school in other districts that better suited their needs. The AUHSD had denied hundreds of transfer requests, but parents were able to appeal denials to the OCBE. A public record request filed by a watchdog group turned up incriminating e-mails revealed the AUSHD was denying these transfer requests to avoid losing the state funding that follows each student.

These stances have earned the OCBE the ire of powerful teachers unions and the broader education establishment. And now state Senator Dave Min, a progressive Democrat elected in 2020, is trying to move the OCBE election to November, when the electorate it larger and typically more Democratic – a move critics charge is calculated to improve the odds of electing anti-charter school, pro-teacher union candidates.

Shaw and other critics of SB 286 say Min’s motives are simple: elect the Board in November when conventional wisdom holds more Democrats are casting ballots. Rolling back the charter school movement is a top priority for the California Teachers Association, which is one of the most powerful special interests in the state. If a local school district denies a request to form a charter school or renew an existing one, the charter school applicant can appeakl that denial to the county board of education.

Given the strongly pro-charter make-up of the OCBE, that provision makes Orange County friendly territory for charter schools in comparison to the rest of the state. Even though teachers unions dominate most school board even in more conservative Orange County, the OCBE is a lifeline for prospective charter schools.

Min, a left-wing Democrat, denies he is targeting the OCBE for political reasons. Min claims “many Orange County residents” were “confused” that elections for different offices took place on different ballots.

However, Min has a track record of political attacks against the OCBE, assailing them on Twitter as “dumb,” “Trumpy” and “an embarassment”: 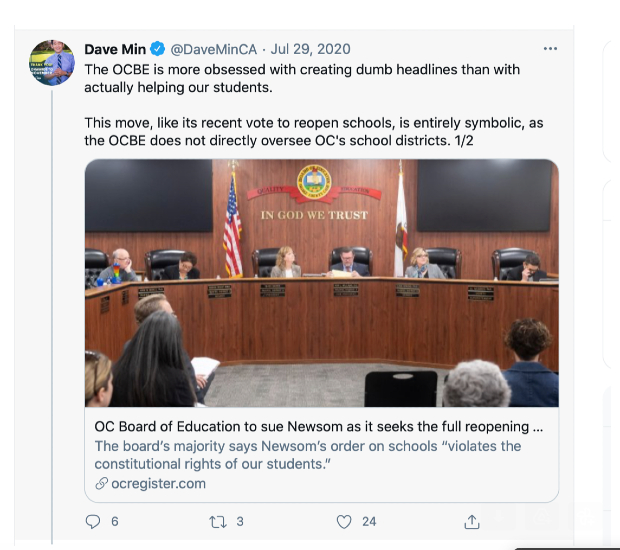 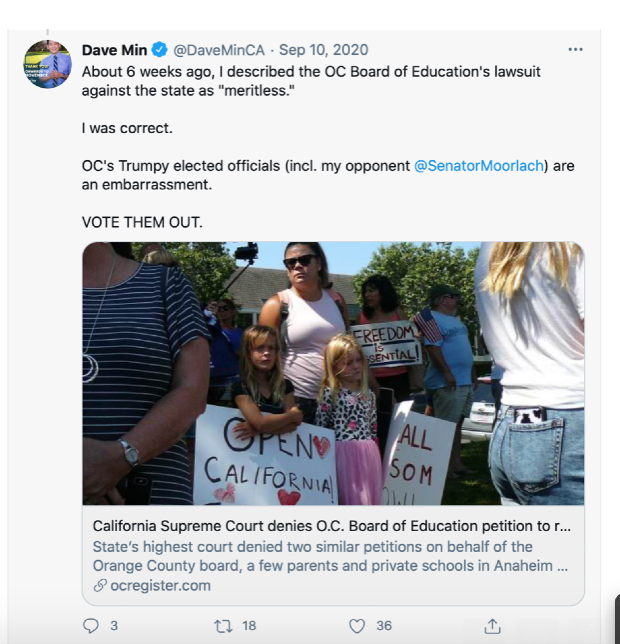 Opponents of SB 286 point out the bill only creates more confusion: elections for all OC Department of Education offices are currently on the same ballot, but Min’s bill splits them between elections that take place 5 months apart.

Min points out that his bill initially applied to “all countywide seats across the state of California” but he decided to single out the OC Board of Education in response to “strong opposition from incumbents and their allies.”

“That explanation just doesn’t fly,” said Shaw. “Nearly every member of the Orange County Board of Education opposes this bill. The president of the state association of county boards of education has denounced SB 286. If Min really cared about ‘incumbent opposition’ he would be trying change when the OC Board of Education is elected.”

Furthermore, there are four other county boards of education that elect their members during the June primary, but Min’s bill doesn’t touch them.

When asked why Min was exempting the Orange County Superintendent of Education from being elected in the higher turnout November election, Communications Director Kelly Jones stated it was for “technical reasons” – the OCBE and the county superintendent elections are governed by different sections of the state code.

However, the state legislature routinely passes legislation in which bills contain changes to different sections of state code.

Min also claims he seeks to move the election of the OCBE rather than the county superintendent to the November general election because the “Board of Education is a larger and more policy-driven body” – an assertion that runs contrary to Min’s July 29, 2020m tweet minimizing the OCBE as “symbolic” because it “does not directly oversee OC’s school districts.”

The reality is the superintendent has far more policy and operational control over the OC Department of Education than the OCBE.

The political reality is current Superintendent Al Mijares is an education establishmentarian and political liberal who has repeatedly clashed the the more conservative and reformist OC Board of Education. In terms of education policy, Min is tightly aligned with teacher union opposition to the charter school movement and greater parental control over where their children go to school and what they are being taught.

Min’s bill is moving quickly through the Democrat-dominated legislature, passing through committees on party-line votes.

On January 12, is passed the Senate Education Committee.

The next day, on January 13, it was approved by the Senate Committee on Elections and Constitutional Amendments.

On January 20, it was passed by the Senate Appropriations Committee.