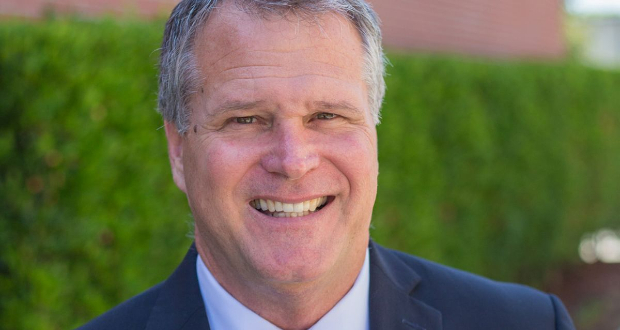 “After a great deal of discussion with my family, prayer, and discernment, I have made the decision to retire as President of Servite High School at the end of the 2021-2022 school year,” Adams stated in an e-mail sent to Servite community. “This is a bittersweet decision as I look forward to the opportunity to devote more time to my wife Debbie, children, and grandchildren but will miss my day-to-day involvement with the Servite community.”

“I have been truly blessed in my role as President at Servite High School and I believe collectively we have accomplished a great deal, even during incredibly challenging times,” Adam said. “I am deeply grateful for how warmly my wife Debbie and I were welcomed into this community four years ago and am proud of all we have accomplished and continue to strive for.

Adams has been president of the school since July of 2021 – and only its third president since Servite moved to the president-principal model in the 1990s. Prior to coming to the all-boys school, Adams was president of the Academy of Notre Dame, an all-girls intermediate and secondary Catholic school in
Massachusetts.

His retirement caps a 30-year career in Catholic education. Adams served as a teacher, coach, assistant principal, and principal of Aquinas High School in San Bernardino across a 16 year period, and also served as associate superintendent of schools for the Diocese of San Bernardino. From there, Adams was hired as head of school for the then newly formed St. Anne’s Catholic Elementary and Middle School in
Laguna Niguel.

Adams is a U.S. Air Force veteran who served 12 years as an aircraft maintenance specialist
before retiring to pursue his passion for Catholic education. He earned both his Bachelor of Arts
in Liberal Studies and his Masters in Educational Administration from California State University
San Bernardino.

“We are deeply grateful for Randy’s exceptional leadership through this challenging
and unprecedented time,” said Servite Board of Directors Chairman Phil Stump. “Without Randy’s 24/7 dedication to Servite and its mission, we could never have navigated the complexities of the COVID pandemic and simultaneously achieved growth in enrollment, success in academics and athletics, and built a financial position that is stronger than ever. We celebrate these achievements.”

“As a parent, I have appreciated the vision and leadership that Mr. Adams brought to Servite during the pandemic,” said Julie Foy, president of the Servite Parent Community Council. “His efforts to bring a sense of normalcy to campus had a positive impact on the young men.“

Servite High School was founded in 1958 after the Archdiocese of Los Angeles invited the Order Friar Servants of Mary in Chicago – the Servites – to open an all-boys high school in Orange County. The motto of the order and the school is Credo ut Intelligam – “I believe, that I may understand.” Servite is unique for its Formation program, the primary vehicle for the school’s mission of forming ethical, faith-filled leaders. The Formation program is premised on four central principles:

Rather than conventional student government, the boys are organized into Priories named after the 7 Holy Founders of the Servite Order; Priories are vertically organized, each populated by students from every grade level, and allow the students to learn and practice leadership through peer accountability and responsibility.