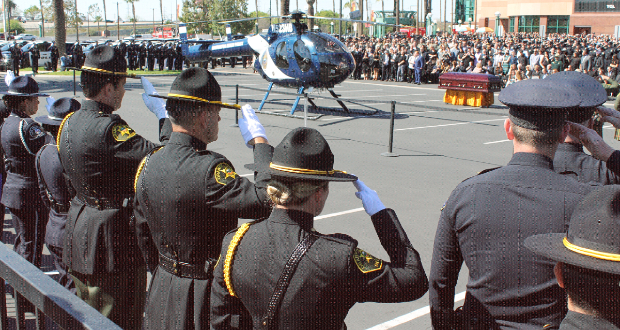 Hundreds of police officers from all over California gathered at the Honda Center in Anaheim today to honor their fallen comrade Nicholas Vella, the Huntington Beach police officer who died in the line of duty on February 19 when the HBPD helicopter he was flying crashed offshore in Newport Beach.

The nearly four-hour memorial service was a homage to Officer Vella’s character, love of family, devotion to law enforcement, and community, given by his family and fellow officers.

The Roman Catholic Bishop of Orange, Kevin Vann, presided over the memorial service inside the Honda Center. Vella was eulogized by a procession of family and fellow officers.

One of Vella’s friends and fellow officer, Francisco Jimenez, told the assembled throng how Vella always “sticking up for the little guy, the underdog.”

“Nick hated bullies and wanted to protect those who were not able to protect themselves. Protecting people was in Nick’s DNA, and he loved helping others,” said Jimenez. “So it’s easy to see why Nick decided to take the path that he did.”

A common theme in every eulogy was Vella’s smile.

“Every time you saw him, he had this infectious smile on his face,” recalled Jimenez. “That smile, that little smirk with those sad puppy dog eyes, looking at you that smile that I can’t get out of my head. And I will never forget.”

“When he came into our family, he just changed our family. It became different. Right away, he became a stable pillar,” said Tovar. “He always just had this peaceful thing about him. He showed us by way of his actions and his deeds. He demonstrated honesty, integrity and patience.”

Tovar talked about Vella’s special devotion to his teenage daughter Dylan, and what he did, few days before his death, to make Valentine’s Day special for her.

“He went to Dylan’s school and stood there in the parking lot with a rose. To give to Dylan,” said Tovar. “I wish I would have thought of that when my kids were in school. But how heartfelt. How loving. How caring.”

Tovar paid tribute the law enforcement officers who had come from all over the state to honor his son-in-law.

“Nick’s death was felt by so many because he was part of a larger body – a whole that is devoted to noble and necessary work,” said Vella’s brother, John. “Nick knew from an early age that he belonged as part of this body that he was a guardian, a protector, which Father called a peacekeeper. That was Nick’s singular purpose in life: whether it was saving someone who was being bullied, or fighting for the underdog, or devoting his entire career to that, cause.”

Vella’s father John Arthur Vella paid eloquent tribute to his son, and shared the heartbreak left in the wake of his death.

“Our lives are forever irreparably shattered. We are broken and empty,” said Mr. Vella. He recalled his son calling his daughter Dylan on his way to work, the day he died.

“She said she loves her daddy and misses him very much,” John Vella said.

Following the service and eulogies, Vella’s family and friends, and hundreds of police officers, formed up in the Honda Center parking lot, around a Huntington Beach Police Department helicopter. HB police officers carried the flag-draped casket into the square, following the traditional riderless horse that symbolizes the loss of a fallen warrior.