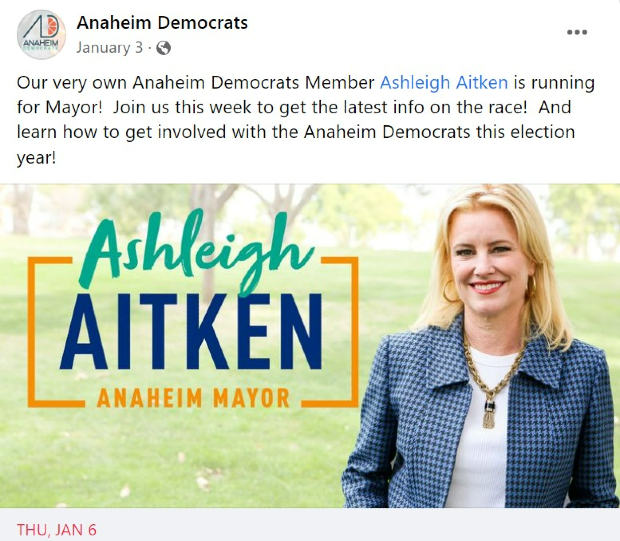 Speaking to an online meeting of the Anaheim Democrats Club this January, Anaheim Mayoral hopeful Ashleigh Aitken did not rule out imposing a gate tax if she is elected, telling the Democrat activist group that a gate tax is something the city should look at and not talked off the table as Anaheim recovers from the pandemic.

According to a participant in the meeting, Aitken’s statement was in response to a question from club member and Anaheim Planning Commissioner Steve White as to whether she supported a gate tax – generally understood as a per-person entry fee levied on attractions such as the Disneyland Resort, Angel Stadium, and the Honda Center.

White was appointed to the Planning Commission by Councilman Jose F. Moreno, a vocal advocate for a gate tax, as are many members of the Anaheim Democrat Club.

Aitken did not give a direct yes-or-no answer, according to the meeting participant, saying that as the Resort recovers, it is something the city should look at and not take off the table.

This is Aitken’s second run for Anaheim mayor. She was a candidate in 2018, narrowly losing to Republican former Councilman Harry Sidhu in a multi-candidate race during an election year that saw Democrats sweep every Orange County congressional race.

Governor Newsom’s COVID lockdown regime resulted in the Disneyland Resort and the Anaheim Convention Center shutting down for more than a year – dealing a body blow to city tax revenues.

Those tax revenues have bounced back with a vengeance since the Disneyland Resort re-opened last year. The Convention Center has resumed large-scale shows, such as the Natural Products Expo West last month.

The city now projects about $70 million in additional revenue from hotel, sales and property taxes than initially forecast for the twelve months through June.  Hotel-stay tax revenue is expected to hit $167.3 million this fiscal year.

When asked via text for comment about her gate tax statements to the Anaheim Democrats Club, Aitken replied, “I am not advocating for a gate tax. As mayor, I intend to support our largest employers and the Resort District, in this period of economic recovery.”

Other issues addressed at the meeting included public safety and housing.

Aitken criticized Mayor Sidhu while speaking in general terms about the city budget, investing more in neighborhoods, and diversifying the city’s economy. She criticized the lack of a city affordable housing ordinance and called for prioritizing low-income housing.

In response to a police reform question from Mike Ortega (the socialist running against Lou Correa for Congress), Aitken said she favored police reform, noted that the Anaheim Police Association strongly supports Mayor Sidhu, and expressed her desire for more “diversity” in police department hiring.

Earlier this week, the Democratic Party of Orange County announced its endorsement of Aitken’s mayoral candidacy.