Yorba Linda HS Tagged With “PYLUSD Is Racist” Graffiti Two Days In A Row, In Apparent Reaction To CRT Ban 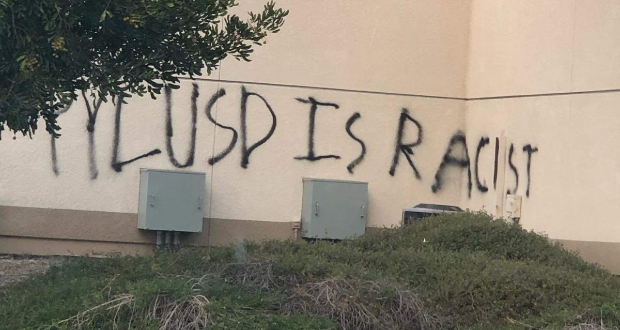 For two days in a row, Yorba Linda High School has been hit with graffiti accusing the Placentia-Yorba Linda Unified School District of being racist, in what appears to be a reaction against the PYLUSD’s ban on Critical Race Theory (CRT) in school curriculum.

Early in the morning on April 26, Yorba Linda High School was tagged with graffiti such as “PYLUSD Is Racist,” “Fuck You” and “PYLUSD Is A Cult.”

According to sources with the district, the taggers returned again in the early morning of April 27 to spray paint the same slogans. Staff were able to remove the graffiti before school started.

The PYLUSD includes Anaheim neighborhoods near the intersection of the 57 and 91 freeways.

Yorba Linda High School was recently ranked as one of the best high schools in the nation by US News & World Report.

Although the tagging took place of Yorba Linda High School, it was clearly directed at the district as a whole.

The graffiti seems to be a clear reference to the PYLUSD Board of Education’s vote on April 5 to prohibit CRT principles from the district curriculum and classrooms. The vote was the culmination of a heated process that began last fall. The boardroom for the April 5 vote was packed with parents and students from both sides of the issue. Supporters of the ban said they did not support glossing over the darker aspects of American history curriculum, but opposed teachers employing CRT principles grounded in the belief the nation’s founding was intrinsically racist, that systemic racism is pervasive and that students are oppressed or privileged based upon their skin color and ethnicity.

READ: PYLUSD Board of Education Votes To Prohibit CRT From District Curriculum

Opponents of the ban called it censorship and mistakenly claimed it would prohibit teaching about topics such as slavery and the WWII internment of Japanese-Americans.

The CRT ban and its supporters were and continue to be commonly denounced in progressive social media circles as being “racist’ and proponents of “white supremacy.”

A steel container on the Yorba Linda High School campus was tagged with the phrase “School=Prison” – a reference to a belief popular in woke social justice circles that the public education is functionally an adjunct of institutional systemic racism and geared toward funneling disadvantaged students into the criminal justice system.

“Any act of vandalism is disgraceful. I would hate to think this is in retaliation for the recent CRT ban implemented in our district,” said PYLUSD Trustee Leandra Blades.  “Our main focus needs to be providing our students with a high quality education. People who are trying to create conflict and racial tension in our schools are shameful.”

Reaction on social media is divided. Commenters on the conservative Yorba Linda Uncensored Facebook page expressed outrage at the graffiti and the belief it is perpetrated by a person or persons retaliating against the CRT ban.

Progressive Left activists blamed the PYLUSD Board majority – especially Trustee Leandra Blades – and understanding that the taggers have been “hurt” by “white supremacy.” One activist alleged it was a false flag incident engineered by Blades.