AUHSD Board of Education Gives 7% Raise To Superintendent And 3.5% Raise To Themselves 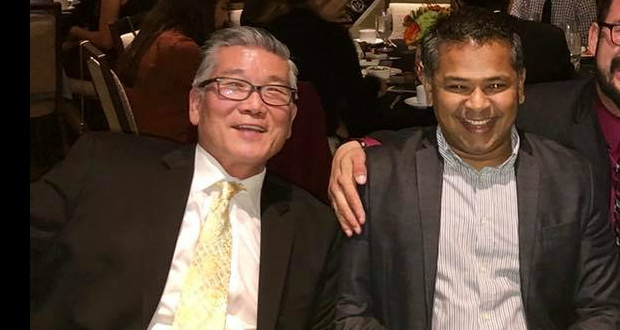 Last night, Anaheim Union High School District Board of Education members outbid each other to give Superintendent Michael Matsuda a 7% salary increase – and then voted to boost their own compensation by 3.5% because they were also giving the AUHSD’s various unions a 3.5% increase.

Board Item called 10.12 called for extending Matsuda’s contract for an additional year, to June 30, 2025.

Board member Brian O’Neal pointed the Board voted to increase Matsuda’s salary by 6% a year earlier in order to move him up the ranks of Orange County superintendent compensation.

“At that time, Mr. Matsuda’s salary was, according to the information we had, he was 15th in the county [out of 28 school districts],” said O’Neal.

O’Neal explained that despite the 6% salary increase, Matsuda was now ranked 16th in superintendent pay in Orange County, and proposed another 6% salary hike, which he termed “reasonable.”

Trustee Annemarie Randle-Trejo said she thought it was “egregious” that superintendents in districts with fewer students were paying paid more than Matsuda.

“We are a progressive game changer in the county,” said Randle-Trejo.

Board President Al Jabbar then one-upped his colleagues and proposed increasing Matsuda’s salary by 7%.

“The work that he has done in terms of changing the course of Anaheim Union High School District, and actually taking in not only statewide recognition, but also national recognition,” said Jabbar.

According to the California Department of Education, most AUSHD students score below average in statewide testing to measure achievement in English Language Arts (ELA) and Math. In various ELA categories (reading comprehension, written communication, etc.) the percentage of students scoring above average ranges from 24.31% to only 11.87%.  In Math categories, the percentage scoring above average ranges from 16.94% to 14.54%

Mastuda and Jabbar are close political allies, and Mastuda blurs the political lines in his role as superintendent. He has publicly supported Jabbar’s past campaigns for the AUSHD school board – for example, attending Jabbar’s campaign kick-off fundraiser in 2018.

Jabbar is now running for the Anaheim City Council from District 3.

The AUHSD Board unanimously approved Jabbar’s motion to give Matsuda a 7% salary increase. Interestingly, for the past several years, the annual agenda item for raising Matsuda’s compensation is never accompanied by an exhibit explaining what is his salary and compensation package is.

Board of Education Bumps Its Own Pay

After boosting Matsuda’s salary, the Board members voted – quickly, unanimously and without any discussion – to raise their own compensation by 3.5% in order to “align” with the raises being awarded under the contracts the Board had approved for the district’s various unions.

In other words, the officials governing the district as stewards for the taxpayers give the unions – all of which have endorsed and contributed to their campaigns – a raise, and then cite that a reason to give themselves one.