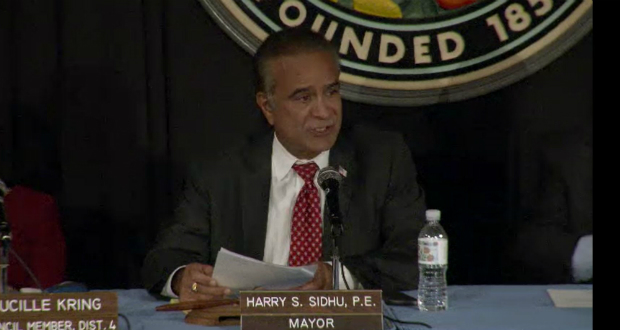 Citing an FBI corruption probe into Mayor Harry Sidhu, the Orange County Superior Court has agreed to a request from state Attorney General Rob Bonta for a 60-day pause in taking up ratification of the stipulated agreement between the state and the City of Anaheim allowing the Angel Stadium sale agreement to go through.

The AG’s office filed the request on Monday, after learning last week that the FBI had executed a search warrant on Mayor Sidhu as part of its probe. The FBI affidavit alleges Sidhu “shared privileged and confidential information with the Angels during stadium sale negotiations, actively concealed same from a Grand Jury inquiry, and expects to receive campaign contributions as a result.”

“These allegations call into question not only the validity of the land sale, but of the Stipulation for Entry of Judgment that is currently pending before this court,” stated Bonta’s filing with the court.

A statement from the city expressed dismay at the allegations but stood by the stadium sale agreement and the process by which it was negotiated.

“We are troubled by this,” Anaheim City Manager Jim Vanderpool said. “Throughout this process, Anaheim staff and the City Council have worked in good faith on a proposal that offered benefits for our community. What has been shared with us was unknown to the city administration before today, and what is being described falls outside of the city’s process on the stadium. We will continue to evaluate what this means and how to move forward in the best interest of our city.”

“We are surprised and dismayed by what has been shared with us,” said Mike Lyster, spokesman for the city of Anaheim. “We take this matter and the issues raised seriously. While allegations, they are troubling nonetheless. As we look to see this process play out, we will determine what this means for the stadium plan in the days ahead.”

“I will begin by assuring the community that this council and the city operated in good faith on the stage of negotiation. There has been surprising and concerning information that is has been made public within the last 24 hours that is was unbeknownst to many of us and not part of the public process,” said O’Neil.

“In light of this, we have many stadium issues coming before us in the very near future. I would recommend to staff and urge that we do not bring any stadium related items before the council. We press the pause button on those and evaluate what’s come out and respect the federal inquiry,” said O’Neil.

“Meanwhile, the community can rest assured that Anaheim we’ll continue with the business of our citizens and residents without hesitation,” the mayor pro team continued.

According to the affidavit, the FBI investigation has been underway since 2019.

On Thursday, May 12, the FBI obtained a warrant to search Sidhu, an e-mail account, his cel phone, his helicopter and the hangar where it is stored.

Mayor Sidhu has issued no statement or comment about the allegations.

At last night’s council meeting, councilmember comments were moved to the early part of the meeting at the request of Councilman Avelino Valencia, in order for councilmembers to address the matter prior to public comments.

“The instability and disgrace that his actions have cast over our city cannot go without consequence,” Valencia continued. “So, Mayor Sidhu, if you are watching, you have one last opportunity to do the right thing for our city. Please resign from the mayorship.”

“I’m devastated. I’m heartbroken. I’m saddened,” said Councilman Steve Faessel. “The evidence is pretty damning. And by thought I knew both of these individuals pretty well. And it appears that I did not and maybe that’s because I try to look at the best side rather than the worst side.”

The last 24 hours have been deeply troubling for me both as a council member and as a resident of Anaheim,” said District 2 Counhcilmember Gloria Ma’Ae. “You know these allegations they’re shocking. It’s a feeling of betrayal. And it just, it hit at the core.”

“So, I want just to commit to all of you that I am here for the people of Anaheim,” Ma’ae continued. “I am here to work with my colleagues to continue to build that trust and for us to be able to move the business of the city forward and working in directions.”