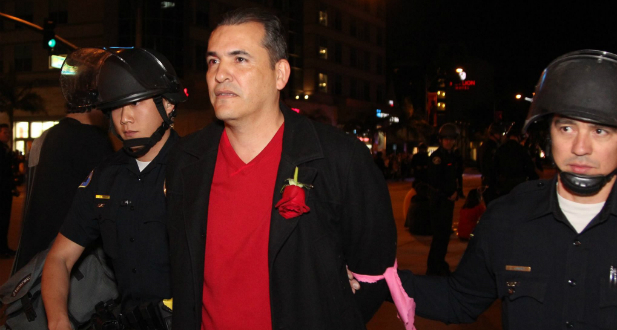 Councilman Jose F. Moreno being arrested by Anaheim police in 2019.

Does Councilman Jose F. Moreno really want to get “money out of politics”? Or is his goal to use campaign finance law and moral bluster to paralyze the business community and leave his union and progressive allies as the dominant voices in city elections?

Judging from Moreno’s own rhetoric, it’s the latter. He has been demanding that Disney specifically and businesses in general refrain from any involvement in council campaigns in order to let the city “heal.” His idea of “healing” is for the business community to unilaterally disarm and let Moreno’s political allies and donors (especiall the Resort unions) can dominate city politics.

Moreno wants to restrict the free speech rights of Anaheim businesses (via his campaign “reform”), while allowing his union allies free rein. He forgets that contributing to a candidate or a cause is an exercise in free political speech, protected by the 1st Amendment.

Councilman Moreno’s proposal to limit and control how people choose to support or oppose candidates is really putting the government in charge of allocating free speech – a reversal of government’s duty to secure our unalienable rights, not ration them.

Furthermore, Moreno’s rhetoric about “money in politics” isn’t backed up by his own record, including using his council position to advance the interests of campaign donors.

Moreno was a leading advocate of switching council elections at-large to by-district. He served on the board of directors of OCCORD, the non-profit advocacy group. In the early 2010s, hundreds of thousands of dollars were funneled into OCCORD as the lead entity organizing the political effort to put a districting measure on the ballot, and the advocacy campaign for adoption of the “People’s Map” that paved Moreno’s path to city council.

$600,000 in special interest money flowed into the successful ballot measure campaign to adopt council districts. Virtually all of that money came from special interests based in Los Angeles, the San Francisco Bay area and Washington, D.C.  Moreno had no objection to “money in politics” when it came to a campaign he supported.

It’s not an exaggeration to say Moreno would not have been elected to city council in 2016 absent the efforts of union allies like UNITE-HERE Local 11, which flooded his district with campaign walkers. This campaign effort – which to my knowledge was not reported as an independent expenditure or an in-kind contribution – would not be covered by Moreno’s campaign “reform.”

Prior to the Measure L “living wage” campaign, Moreno used his council position to agendize a public presentation of an Economic Roundtable study in support of a “living wage” ordinance. The Economic Roundtable is funded by unions, and the study itself was paid for by a Moreno campaign donor – UNITE-HERE Local 11. The study presentation was a pro-living wage measure infomercial using the city’s video channel. Moreno also called for the city council to simply adopt as an ordinance the “living wage” measure being promoted by his campaign donors. When UNITE-HERE Local 11 invited Moreno to join them in breaking the law by shutting down one of the city’s busiest intersection, Moreno went along.

The point is Councilman Moreno’s rhetoric about “getting out of politics” is belied by his record. He has no problem with interest groups contributing or spending money in support of candidates and causes he supports.