“The Door Is Wide Open; Let’s Walk Through It”

This evening, Councilman Jose F. Moreno will renew his push for re-writing the city’s campaign finance rules and for a wide-ranging internal investigation in the wake of the ongoing FBI corruption probe into former Mayor Harry Sidhu.

Moreno’s rhetoric aside, his push is not about truth or justice or “getting money out of politics.”

It is about power. It is about destabilizing city government. It is about trying to make his council colleagues feel morally responsible for former Mayor Sidhu’s alleged actions and therefore susceptible to Moreno’s brand of moral manipulation.

Moreno’s own council aide, Karen Estrada Romero, lays it out in a Tweet from May 24: 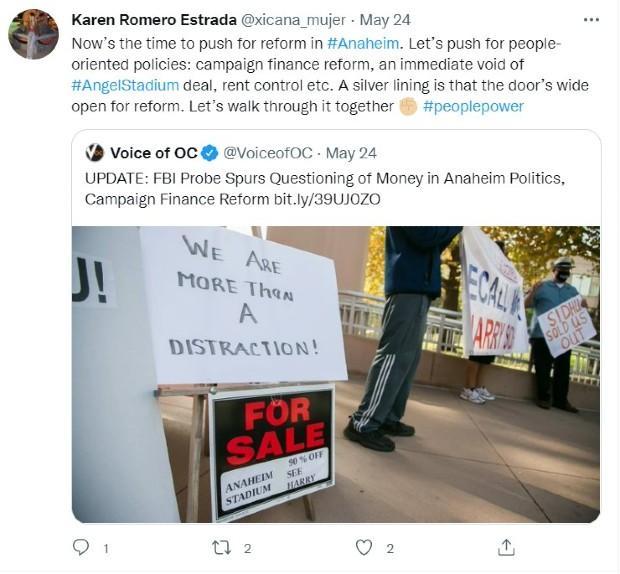 “The door is wide open, let’s walk through it.”  That isn’t a call for accountability and reform. That is a call for exploiting a crisis for political purposes. At least Ms. Estrada displays a candor lacking in her employer.

Regarding campaign finance “reform,” the headline of yesterday’s Voice of OC article inadvertently put Moreno’s intentions truthfully: he seeks to handcuff the ability of Anaheim business to advocate on their own behalf.

Moreno wants to slap an array of restrictions on the ability of business owners to participate in the democratic process, while exempting his political allies in the unions from any such limitations on their freedom of speech.

The United States was founded on the principle of equality before the law. Moreno seeks to treat people and entities unequally depending on what economic sector or activity they are engaged in.

It’s not even subtle.

Among these restrictions (from which Moreno’s union allies are exempt) is requiring a councilmember to recuse themselves if their campaign received more than $250 from the applicant.

First, let’s acknowledge that is a totally arbitrary number. Yes, it is pulled from the Levine Act – which governs non-elected government bodies – but it is arbitrary nonetheless.  We’re asked to believe a $251 campaign contribution corrupts the recipient but $250 does not.

Councilman Moreno has accepted many campaign contributions in excess of $250. Are we to believe he his therefore the captive of those contributors?

Councilman Avelino Valencia wants to amend the city’s campaign finance ordinance to require that the threshold for the mandatory 24-hour reporting requirement be extended from $1,000 down to $250. That’s in the aggregate: once a donor’s cumulative contributions reach $250 the campaign must file a Form 497 within 24-hours of exceeding that limit.

While well intentioned, in practice it will disadvantage inexperienced and grass roots candidates, who generally use a spouse or neighbor or friend serve as their campaign treasurer. These are people who are learning on the fly how to comply with campaign finance laws. These are also the types of council campaigns that are most reliant on smaller donations, and most likely to trip the reduced 24-hour reporting threshold.

Treasurers are legally liable for mistakes and omissions in their candidates’s campaign reports. If fines are levied, they’re levied against the treasurer.

Establishment candidates can afford to hire professional treasurers who are experience in campaign law compliance.  Avelino’s request merely adds another level of compliance requirements for no real additional accountability. The current threshold captures major donors; lowering the threshold to $250 is a throwaway measure. It’s only real impact is making it harder to inexperienced campaign treasurers to comply.

The council will also take up conducting its own internal investigation.

The FBI probe is (presumably) still ongoing. The FBI has leveled allegations against Sidhu but has not yet charged him with anything. The prudent course is to wait for the federal investigation to conclude and then deliberate on whether additional action by the city is necessary. The city is already on course to conduct internal audits, but should guard against them Turing into witch hunts. We saw at the last councilmeeting how innocents can get caught up in a dragnet. Sidhu supporters who had received Mills Act tax credits years ago wound up on a spreadsheet of people and organizations who had done “business” with the city and also contributed to Sidhu’s campaign.

American justice is grounded in principles like due process and the presumption of innocent and individual accountbaility for individual actions. What Moreno is pushing for something more collectivist, more like revolutionary justice that targets people based on who they are rather than what they have done.

When he talks about investigating council colleagues and city staff, Moreno claims his motivation is to “exonerate” the “innocent” – forgetting that exoneration is for individuals who have been charged with something. The innocent don’t need to be exonerated.

For Councilman Moreno, this whole kabuki dance is about the pursuit of political power, by a faction that has consistently failed to rally voter support at the ballot box. Denise Barnes barely won election in 2016 as a Republican. By 2020, she had changed political parties and her positions on issues like rent control, and District 1 voters chose someone else to represent them (Jose Diaz).

Annemarie Randle-Trejo and Jeannine Robbins embraced the ideas that Moreno and his claque are pushing now – and were rejected by the voters.

The unspoken premise of Moreno and Co.’s current campaign is that the voters have been stupid, and the present chaos is an opportunity to push through policies the voters have resisted.

As his council aide put it, Moreno and his political allies see the door open to gaining political power and they trying to cow Moreno’s council colleagues into helping him walk through it.