To say woke progressive activists view society through a racial lens would be an understatement. To paraphrase Vince Lombardi, when it comes to how the woke Left approaches policy and politics, race “isn’t everything – it’s the only thing.” Who one is as an individual is subordinate to one’s racial/ethnic/gender identity.

Case in point: a July 15, 2021 tweet from Karen Romero Estrada, a left-wing political activist who is one of Councilman Jose F. Moreno’s council aides: 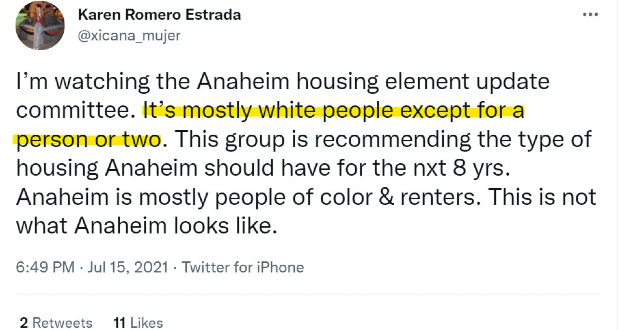 which was made up of:

In other words, HUEC membership was directly relevant to its mission.

Let’s unpack Estrada judgment: “It’s mostly white people except for a person or two. This group of recommending the type of housing Anaheim should have for the next 8 yrs. Anaheim is mostly people of color & renters. This is not what Anaheim looks like.”

What she is really saying is racial identity is dispositive, the source of political legitimacy. The cumulative and individual expertise of HUEC members is less important than a physical characteristic like their pigmentation. She assigns more more legitimacy to an externality than knowledge and agency. It annuls individuality and embraces the retrograde belief that only people of color can make decisions for people of color. 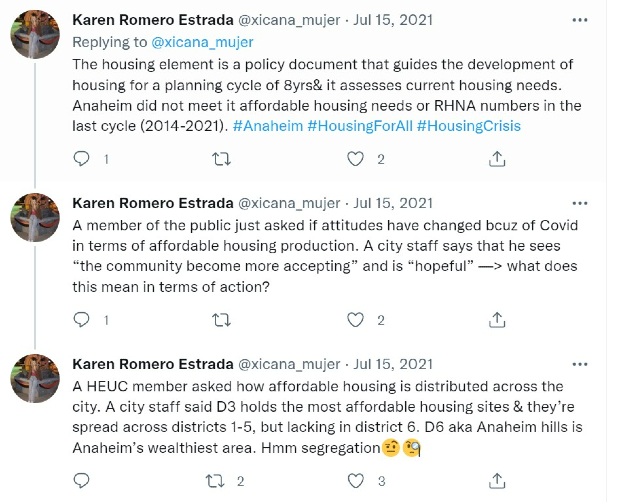 IN her last comment, Estrada seems to be saying that if an area of Anaheim has less affordable housing than other areas, it’s evidence “segregation” is at work. And the affluent character of Anaheim Hills residents – regardless of their actual diversity – makes them doubly suspect.

Estrada, however, is mirroring her boss’ views. A constant of Moreno’s politics has been a fixation on racial and ethnic identity as an organizing political principle.