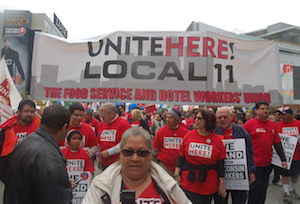 On August 29, UNITE-HERE Local 11 filed paperwork with the Anaheim City Clerk stating its intent to begin signature gathering in order to qualify it for the ballot.

The initiatives language defines “event centers” as publicly and privately owned venues of at least 20,000 square feet, and includes – but is not limited to – concert halls, stadiums, sports arenas and conventions centers that are used for “public performances, sporting events, business meetings and similar events.”

That would encompass city-owned venues like Angel Stadium, the Honda Center, the Anaheim Convention Center and the Grove Theater – as well as planned venues such as the proposed concert hall and outdoor amphitheater planned for ocV!BE.

The initiative also tacks an annual cost-of-living increase onto the $25 minimum wage. Beginning in 2026, the COLA must be greater than either 3% or the CPI as of September 25, 2025, and CPI in September of subsequent years.

In addition to a massive minimum wage increase, UNITE-HERE’s measure would impose stringent regulations on how much floor spae hotel room attendants can clean before being paid double time,

For smaller hotels (fewer than 60 guest rooms), hotels would have to pay room attendants wive their hourly pay iffy they cleaned more than 4,000 square feet of floor space during an 8-hour shift.

For hotels with more than 60 rooms, the threshold for triggering double-time pay would be 3,500 square feet.

In other words, if a room attendant cleaned 3,501 square feet of floor space during their 8-hour shift, they would be entitled to twice their hourly pay.

If approved by the voters, UNITE-HERE’s initiative would clearly impose significant cost increase on hotel owners and on city taxpayers.  The UNITE-HERE implicitly admits as much in the initiative language: if hotel owners or event center employers can prove the wage increase will drive them into either bankruptcy or laying off 20% of their employees or reducing work hours by 30%, they can petition the Anaheim city manager for a one-year waiver.

However, waivers mays be appealed to the city council – cold comfort to hotel owners if the council is controlled by UNITE-HERE allies.

However, the measure does contain a loophole by which hotel owners and event center owners: unionizing its workers.  If the initiative passes, a non-union hotel could escape the $25 minimum wage and other onerous provisions by signing a collecting bargaining agreement with UNITE-HERE Local 11:

6.100.140. SUPERSESSION BY COLLECTIVE BARGAINING AGREEMENT.
The provisions of sections 6.100.040 through 6.100.080 of this chapter, or any part thereof, may be waived pursuant to a bona fide collective bargaining agreement, but only if the waiver is expressly set forth in clear and unambiguous written terms. Neither party to a collective bargaining relationship may waive or supersede any provision of this chapter by means of unilaterally imposed terms and conditions of employment.

Critics note this is not the first time Local 11 has pulled a bait-and-switch that helps UNITE-HERE Local 11 leadership boost membership rolls and dues revenue, while depriving hotel workers of the increased wages they were expecting.

When a similar measure was adopted in Los Angeles, UNITE-HERE Local 11 members were surprised to discover they would be receiving the promised minimum wage increase because they worked at hotels with collective bargaining agreements with Local 11.

“This is nothing more than an attempt to bully hotels into unionizing, even if it’s not what employees want. This tactic is not new for Local 11, a union that also advocated for exempting unionized hotels from Los Angeles’s $15 minimum wage,” said Charlyce Bozzello of the Center for Union Facts. “Workers should ask themselves if this is really a union they want representing them.”

“I staunchly oppose this and any other municipal measure aimed at intervening in the employer-employee relationship that leads to labor mandates beyond what state law requires,” said Anaheim Mayor Pro Tem Trevor O’Neil. “The heavy hand of government tipping the scales in favor of one party or the other is just not good governance, and not good for Anaheim’s economy.”

Local 11’s organizing failures fuel suspicions the union wants to use the initiative to raise the wage and regulatury burden on hotels to such a point that signing a collective bargaining agreement with UNITE-HERE would be less expensive. Whether that would prove a sound strategy is uncertain.