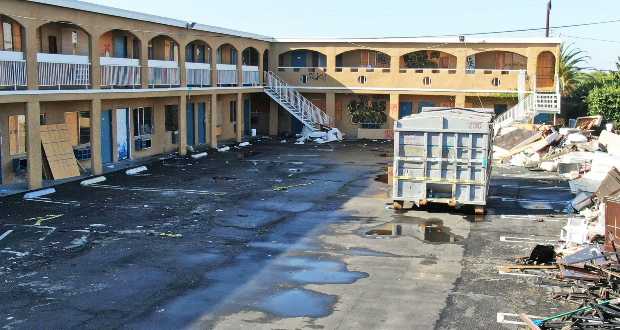 Anaheim demolished a closed Beach Boulevard motel Wednesday, January 11, as part of a larger effort to rebuild the 1.5 miles of Beach Boulevard running through the city.

Crews using an excavator and other heavy equipment knocked down the former two-story, 70-room Covered Wagon Motel, which the city closed in March 2022 for public health and safety violations and inhumane living conditions.

Anaheim bought the closed motel for $6.6 million in December.

The site is set to be redeveloped as affordable apartments and townhomes for sale with planning in 2023 and potential construction in 2024.

“This is Anaheim’s commitment to rebuilding Beach,” Mayor Ashleigh Aitken said. “Sadly, this motel came to symbolize the problems of Beach with human trafficking and drug abuse that destroyed lives and took a toll on nearby residents and businesses. Now this site represents a bright future as we clear the way for new homes and families who will be invested in a new Beach Boulevard.”

Once a thriving route to the coast, Beach Boulevard today suffers from serious problems, including human sex trafficking, devastating drug abuse and distribution, illegal gambling and commercial theft rings, among other issues.

The Covered Wagon opened in 1961 as the Bahia Motel, in the mid-century modern style of other Beach motels in their heyday.

While Beach today includes some well-run motels, limited travel demand has brought prostitution, drugs and other illegal activity to others with impacts across the area.

Anaheim is working to rebuild Beach as an inviting, walkable, livable street with new homes and thriving businesses.

For the past year, a citywide effort has focused on immediate public safety issues, near-term improvements and longer-term redevelopment.

Anaheim is buying some motels and ensuring operational and safety standards at others as part of a comprehensive effort to address the problems of Beach Boulevard.

In addition to the Covered Wagon, the city on Dec. 29 also acquired the nearby Anaheim Lodge for $7.6 million. The motel is eventually expected to be replaced by a mix of homes.

In April, Anaheim’s City Council placed additional operating conditions on the Anaheim Lodge and Travel Inn Motel after a high number of public safety incidents and other issues.

With the Covered Wagon demolition, Beach Boulevard now counts 15 motels, down from 19 in 2017. Here’s a recap of recent demolitions:

For the past year, Anaheim Police has stepped up targeted enforcement of human trafficking, drugs and other violations on Beach.

The effort is supplemented by high visibility cameras with bright blue flashing lights along Beach as a second set of eyes for police and to deter illegal activity.

We are also working with state agencies to address labor, wage and tax violations taking place on Beach.

Anaheim Public Utilities is also working on plans to relocate electricity and other utility lines from overhead poles to underground trenches along Beach to improve reliability and the look of the street.

Anaheim is also in discussions with the California Department of Transportation to take responsibility for the roadway of Beach, which now falls under the state as Highway 39.

Responsibility for Beach would give Anaheim more flexibility in redevelopment, landscaping, medians and walkways, as seen in neighboring Buena Park, which took over its section of Beach in 2012.

Long term, redevelopment will be what transforms Beach.

In 2019, Anaheim adopted new planning that calls for attractive street-facing buildings, outdoor plazas, corner promenades and other enhancements while streamlining the process for new projects.

This year, construction is set to start on an adjoining retail center with a grocery store, home improvement store, restaurants, shops and services.

In 2024 and beyond, we expect to see redevelopment move down Beach.

At southeast Beach and Lincoln, affordable apartments, townhomes for sale and some retail are planned about half a block down to the West Anaheim Youth Center, which was built in 2007.

The Covered Wagon and Anaheim Lodge are also set to see redevelopment as affordable apartments and townhomes starting in 2024.

For more about what Anaheim’s doing to rebuild Beach, please see Anaheim.net/rebuildbeach.