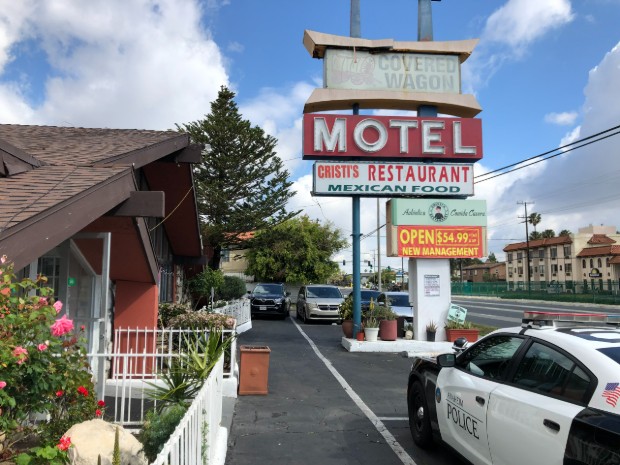 Tomorrow night, the Anaheim City Council will vote on a $6.6 million proposal to purchase the red-tagged Covered Wagon Motel on Beach Boulevard as part of its ongoing efforts to revitalize the troubled corridor and West Anaheim in general. The city intends to re-develop the property as a mixed-use development.

The squalid, 70-room motel was shut down by city officials in March of this year. City authorities described conditions at the Covered Wagon Motel as “inhumane” and “deplorable.”

At the time, there were approximately 25 people were living in the Covered Wagon, including families and seniors. They were paying between $1,000 and $2,000 a month in cash, using an ATM in the motel lobby. Some residents were living in rooms that were boarded up. One man paid $1,000 a month to live in a storage container at the north end of the property.

Officials found human waste and filth in the ruined motel rooms, and often were littered with drug paraphernalia. The occupants of one room fled upon the arrival of city officials, leaving behind syringes, pipes, drug tinfoil, knives, and stolen gift cards.

When city officials knocked on the door of one room, it was answered by a young child who was crying because his mother had been gone for hours.

The purchase is part of a larger city effort to revitalize Beach Boulevard and West Anaheim.

Last October, the dilapidated Americana Motel on Beach Boulevard was torn down  to make way for a mixed-use development that included affordable apartments, for-sale townhomes and 5,000 square feet of retail.

In January of this year, the city launched an intensive effort to clean up the historic corridor, focusing on proactive code enforcement and crime prevention, paralleling existing economic development efforts aimed at attracting new housing and higher-end retail, entertainment and shopping options for West Anaheim residents, along with city investments in neighborhood improvement.

The revitalization is anchored by the 39 Commons project taking shape at the intersection of Beach and Lincoln Avenue – a large-scale development that will include for-sale housing, a specialty supermarket and upscale amenities. Townhomes are now available for sale.