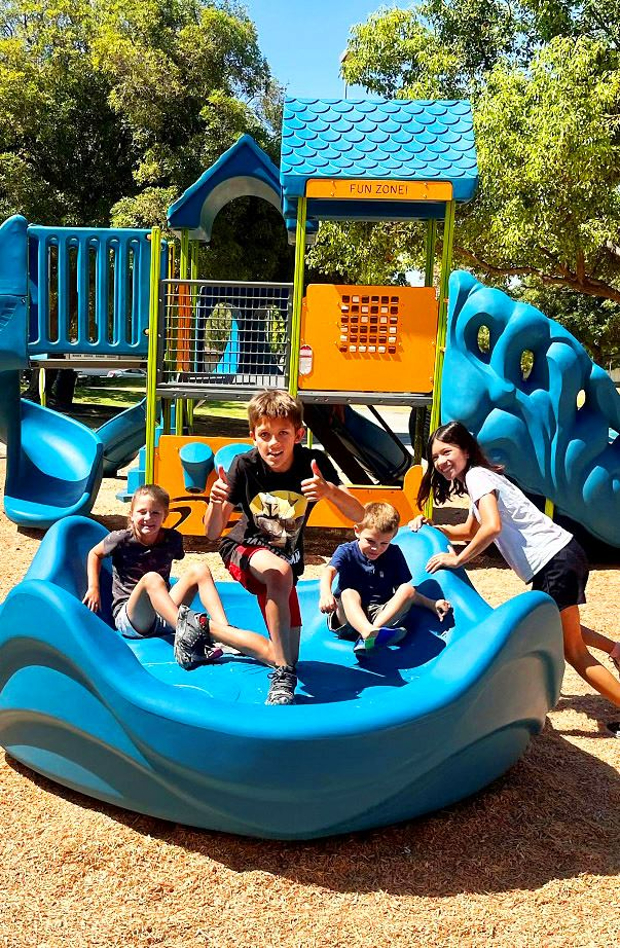 The building of Anaheim’s newest park will get underway on Sept. 16 as the Anaheim Ducks, the city of Anaheim, KABOOM! and other volunteers come together to assemble a playground designed by neighborhood kids and families.

The 4,300-square-foot playground will include a climbing wall, a bridge, monkey bars, a circular spider web climber, spinners, bucket swings, a companion swing, a zip line, teeter-totter and game and musical panels.

The playground, which will open for kids shortly after assembly and safety checks, will be the first step in the transformation of a grassy field into Center Greens, a new downtown park next to Anaheim City Hall and the Downtown Anaheim Community Center.

Center Greens will see ongoing building with the fully completed park opening in late 2023. The park is set to include a new basketball court, skate park, an obstacle course, a loop walking trail and more.

For kids and families who live around City Hall, Center Greens will be their neighborhood play and green space, joining nearby Citrus Park as another place to enjoy.

For those who work in and visit downtown Anaheim, Center Greens will be another attraction along with the Anaheim Packing House, Center Street Promenade and the Muzeo Museum and Cultural Center.

The Center Greens playground is the result of a fun-filled design day on July 15.

More than 50 children and parents from the neighborhood, the Anaheim Family YMCA and Anaheim summer programs joined with KABOOM! and Anaheim Ducks Head Coach Dallas Eakins, future Ducks prospects players, the Ducks Street Team and mascot Wild Wing to come up with features and designs.

Playground planning by the city of Anaheim followed based on what kids said they wanted to see in their new playspace. The design keeps accessibility in mind so as many kids as possible can enjoy it, whatever their level of ability.

During the past few weeks, crews have been preparing the playground site, excavating, filling and grading the ground to get ready for build day on Sept. 16.

For the Anaheim Ducks, the playground is a way to give back to the hockey team’s hometown by promoting play and the health and wellness of kids and families in the community.

The build day will also help kick off the 2022-23 Ducks season, which gets underway with preseason games starting Sept. 25 and the team’s home opener against the Seattle Kraken at Honda Center on Oct.12.

Anaheim is the only home ice the team has known after debuting in 1993 at what’s today Honda Center and winning the Stanley Cup championship in 2007.

This will be the 15th KABOOM! playground in Anaheim and the first sponsored by the Anaheim Ducks.

Volunteers interested in taking part sign up and learn more here. Prep work will start on Sept. 14 with the playground build on Sept. 16.